FutureGrind Interview: The Stylized Flow of Grinding on PS4

You may have played Jet Set Radio or Trials Fusion. You may have had your fill of ExciteBike back in the NES (RIP) days. Heck, you may even enjoy grinding in Sunset Overdrive. But the overall gameplay that defines Milkbag Games’ Futuregrind, the upcoming puzzle racer for PS4 is…odd, to say the least. Players take control of a grinder which traverses through levels made up of blue and red rails. The grinder itself is composed of two wheels which can rotate alternatively hang and grind from the rails as need be. Sound weird? It is but it also looks insanely fun running at 60 frames per second.

GamingBolt spoke to Milkbag Games’ Owen Goss and Matt Rix for their thoughts on FutureGrind, what inspired the game, developing on PlayStation 4 and what being “indie” means in today’s industry. 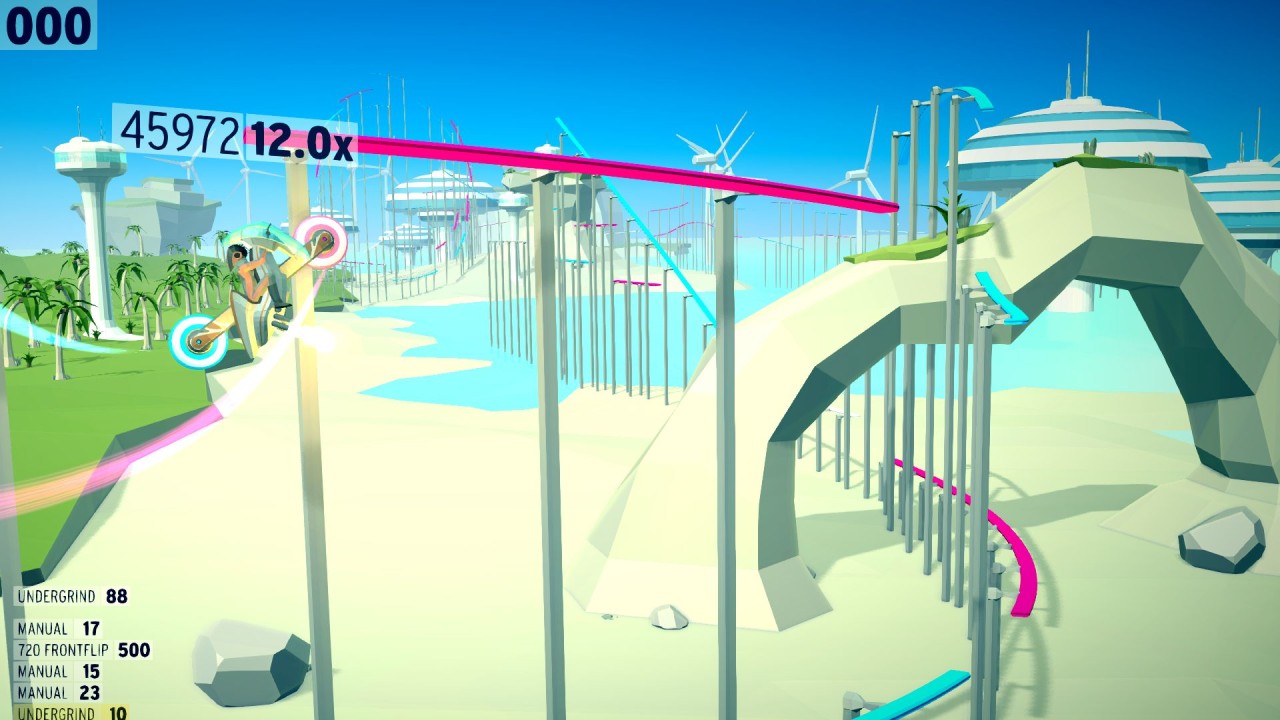 "When someone is an expert at FutureGrind, you can tell. Their style has more flow to it, more purpose, and just looks awesome. With Twitch streaming on PS4, high-level players will show just how deep the game gets."

Rashid K. Sayed: The concept for FutureGrind seems like a simple one but also incredibly unique in that we haven’t quite seen anything like it. How did it come about?

We liked a lot of 2D “dirtbike games”, but most were either about racing (Trials) or puzzle solving (Elastomania). We wanted to make one where it was all about doing tricks and combos. The most exciting moments of those dirtbike games happen when hanging by one wheel, so the core design of FutureGrind capitalizes on the idea of hanging.  We designed the grinder without a “right way up” so you can spin and flip as much as you want.

We added the blue and red rails and wheels to make survival a challenge. It forces players to learn how to “manual” (balance on one wheel) right from the start.

Rashid K. Sayed: FutureGrind’s gameplay looks deceptively easy to get into but complex to master. How does this approach serve to attract both the casual and hardcore player base, especially on the PS4?

The controls are so simple that anyone can pick it up and just “get it” right away. This makes the game easy to explain to people at events. The simple rules also mean that when new players fail (which they do a lot!), they understand why right away. There’s nothing unfair or hidden about it.

The hardcore players will get into it once they see skilled players doing crazy stuff in the game. When someone is an expert at FutureGrind, you can tell. Their style has more flow to it, more purpose, and just looks awesome. With Twitch streaming on PS4, high-level players will show just how deep the game gets.

Rashid K. Sayed: Milkbag Games is a two-person team. In today’s industry, we’d label that as “indie”. What are your thoughts on the evolution of the term, especially in contrast to five years ago?

The term “Indie” is hard to define and impossible to enforce, so I think developers and studios should choose for themselves whether it applies to them or not. If someone calls their studio “indie”, it means they believe they’re developing games from a position of creative independence.

Rashid K. Sayed: What inspired the graphical style for FutureGrind? Does it run at 1080p and 60 FPS?

We’re big fans of the low-poly look that’s been getting popular the past few years. Milkbag is only two people, so this style lets us to make 3D games that look cool without dealing  with tons of textures. With low-poly we can strip the game down to the most important parts, so that everything revolves around the gameplay. FutureGrind will run at 1080p and 60fps on the PS4, because this style of game would feel sluggish at 30fps.

Rashid K. Sayed: What was it like to work with bignic on FutureGrind’s soundtrack and how does his sound contribute to the overall experience?

bignic was great to work with! He took our initial directions and went above and beyond what we were hoping for. The music gives the game a sense of pace and intensity that really makes the whole thing work. The full soundtrack is amazing, I can’t wait until everyone hears it when the game comes out. 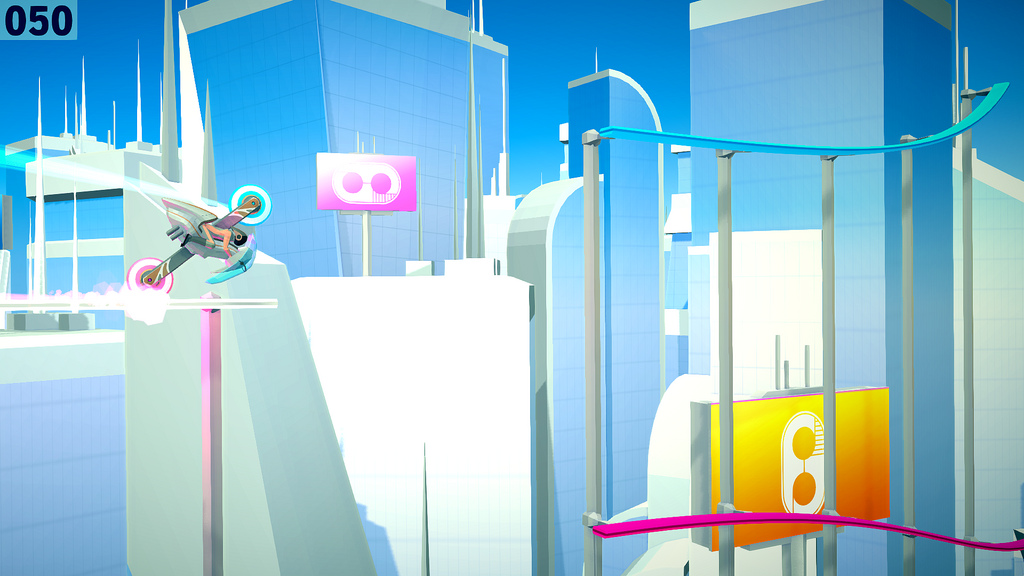 "The sponsors are the core of Career mode. It works like an RPG quest system. Sponsors give you stuff when you impress them by completing missions. They unlock new tracks, new grinders, etc."

Rashid K. Sayed: Tell us some more about the Sponsors in FutureGrind and how they tie into the single-player mode.

The sponsors are the core of Career mode. It works like an RPG quest system. Sponsors give you stuff when you impress them by completing missions. They unlock new tracks, new grinders, etc.

The missions won’t just be “get a high score”, they’ll be things like “complete the course without touching any blue rails”, or “finish this course without using jump”.

Rashid K. Sayed: Will there be any other modes available outside of the main “campaign” so to speak?

There will probably be some other modes outside of the main career mode, but we haven’t nailed them down yet, so I can’t say anything about them yet.

Rashid K. Sayed: FutureGrind is currently announced only for the PlayStation 4. Will it arrive on any other platforms at launch or several months after?

Our current plan is to launch on PS4 and Steam at the same time. We don’t have any other launch plans to announce right now.

Rashid K. Sayed: What are your thoughts on Sony’s indie development program, especially compared to ID@Xbox? How has Sony helped foster FutureGrind’s development on the PS4?

I can’t comment on ID@Xbox, but Sony has been great to work with. Sony has been in constant contact with us and they always make sure we have whatever we need.

Rashid K. Sayed: When can we expect FutureGrind to release worldwide?

We are aiming for release in early 2016, but we don’t have a specific date in mind yet.

Rashid K. Sayed: What are your thoughts on developing on the PS4’s API? Has the API improved when you first started working on it?

I can’t comment on specific PS4 API stuff, but I can say that developing for the PS4 has been great.

Rashid K. Sayed: As someone who is also developing the game on PC, what are your thoughts on the announcement that DX12 will bring 20% boost to GPU performance?

Any performance boosts are always welcome. FutureGrind will run well even on low-end PCs, but high-end PCs will get more eye candy.

Rashid K. Sayed: Is there a specific reason why you are not launching on Xbox One?

Thanks for the interview! We think players are going to love FutureGrind when they play it. For any news or announcements, you can follow @FutureGrind, as well as our personal accounts at @OwenGoss and @MattRix. For the technically inclined, we also have a dev blog up at futuregrind.tumblr.com