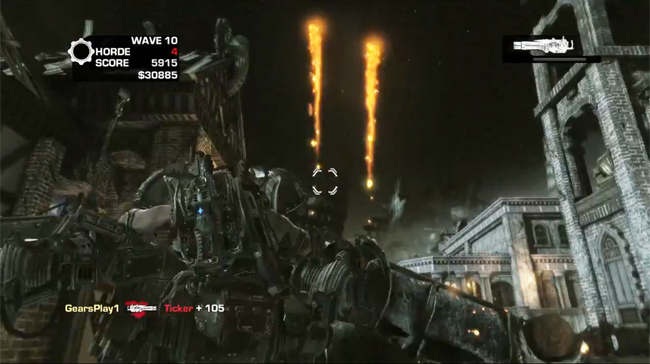 Checkout – Checkout’s combat takes place in the carcass of an abandoned superstore.
Drydock – Much has been written about the beauty of Seran culture, but people often forget the backbone of industry upon which it all relies. This shipyard stands full of undelivered goods and the necessary tools of a society’s infrastructure. Its most prominent landmark is the rotting husk of a cargo ship that will forever stand in Drydock.

Gridlock – This ashen street was once a bustling tourist destination known for its quaint inns and waterfront cafés. Even the water is gone now, replaced by the burnt shell of a crater that stands as a testament to the loss of Seran humanity.
Hotel – Small island resorts such as this one catered to the opulent tastes of vacationing Serans. But as the Lambent infection spreads across the globe, tides are shifting to flood once popular beaches, and fierce winds batter and push at the walls of humanity’s creations.
Mercy – This area was once a bustling town square filled with people, but it never recovered from the UIR mortar shellings of the Pendulum Wars.
Old Town – Several remote areas of Sera managed to stave off the impact of Emergence for quite some time. Island towns such as this one were able to sustain themselves with small farms and a steady bounty from the ocean.
Overpass – As the Lambent infection spreads across Sera, the planet is quite literally falling apart. And as the substrata beneath this forgotten overpass begin to disintegrate, the entire city block is collapsing along with it, sliding into a vast underground cavern.
Sandbar – This observation post once had a commanding view of the distant horizon. Never threatened, it was thought to be impenetrable due to its unpredictable coastline and the constant shifting of sandbars along the shallow water of the coastline. And it never did fall; it was simply abandoned when humanity fled from a threat that nobody could ever see coming.

Thrashball – This stadium was once home to a different sort of national hero, one who fought for honor and glory, instead of scrambling for survival.
Trenches – The Locust have begun to carve mines and tunnels into the rocks of the Seran Deadlands, eking out any existence that resembles the underground passages of the Hollow they once called home.

Check out the Gridlock MP video below: