For Xbox One owners, Gears of War 4 marks a new era for video game visuals.

Gears of War on the Xbox platform has always set the bar high for video game graphics and visual effects. Gears of War 4 takes the series to new heights with some of the best visuals of this generation and yes, The Coalition managed to pull it off on the so called “under-powered” Xbox One. The older games ran on the Unreal Engine 3 with several modifications implemented into the base engine, but with a new generation and development team, Gears of War 4 utilizes the Unreal Engine 4 to get the job done.

We have already seen what the engine is capable of through tech demos and GDC presentations but Gears of War 4 marks the first time ever that a major AAA title is utilizing the popular game development framework and boy, does it look good. Gears of War 4 utilizes many facets of the game’s engine and we decided to take a look at some of the intricate details that the game boasts. One of the biggest changes that set the latest iteration apart from the previous entries is its lighting. The game utilizes a fantastic mix of global illumination and dynamic lighting along with full support for physical based rendering which pushes the game’s graphics to an all together different level.

"Gears of War 4 takes the series to new heights with some of the best visuals of this generation and yes, The Coalition managed to pull it off on the so called “under-powered” Xbox One."

The game also utilizes Unreal Engine 4’s new material pipeline which makes full use of physically-based shading resulting into close to realistic looking characters (during cinematic cutscenes) and environmental objects. The game’s cutscenes look gorgeous due to a sudden upgrade in post processing features such as ambient cubemaps, depth of field, lens flares and enhanced ton mapping. Although the in-game character models undergo a slight downgrade compared to the in-engine cinematic cutscenes, you won’t be noticing it due to the game’s locked behind the shoulder camera angle. The shift to Unreal Engine 4 has also resulted in slightly improved artificial intelligence of enemies resulting in increased spatial awareness of the world around them and enables them to make smarter movements. If you have played the previous Gears of War games you will instantly observe this difference,

Gears of War 4 runs on DirectX 12 on the PC as well as on the Xbox One. The API iteration has been available on Xbox One since late last year and the improvements are quite apparent in the game. The use of DX12 has resulted into thousands of dynamic lights per scene, artistic-programmable tessellation and displacement, and most importantly a big bump in the destruction aspect of the engine. The game utilizes a mix of scripted cinematic and dynamic cover destruction along with a low-cost GPU particle simulation and a collision system that interacts with the depth buffer resulting into next to no hit on performance parameters.

One of the disappointing aspects of Gears of War 4, which we slightly touched upon earlier, is the somewhat downgraded in-game character models. There seems to be a drastic reduction in skin shader and hair rendering quality resulting into lesser detailed character modes compared to the cutscenes. It does not look worse but it’s not all that great either. There are games like Uncharted 4 which does a decent job in making sure that the character models used in the actual gameplay are as close as possible to the high quality ones found in the cinematics. However, as noted before, it’s not really a deal breaker as we hardly get to see the characters from the front due to the fixed camera angle.

"Overall, this is by far one of the best optimized PC games available on the market. Just make sure you grab those updated Nvidia and AMD drivers for your respective GPUs."

The game also features amazing use of screen space reflections, several alpha and volumetric effects such as detailed fire, smoke, dust, dirt, rubble and the particle effects that kick in whenever the player is shooting at the robots. Rain and wind flares are a big part of the game’s weather system and a fast, low-cost GPU particle simulation ensures that there is no hit to the performance whenever they kick in. One may come to the assumption that the wind flare system is scripted in nature but that is far from the truth. The game allows you to use environmental objects to take out enemies and if that were not enough try throwing a grenade and it will get swayed away according the wind flow direction.

Unreal Engine 4 has also allowed The Coalition to develop large, open world environments with the Landscape System. This is seen much later in the game which paves the way for terrains that are orders of magnitude larger than what we have seen in previous games. Slight pop in can be observed during such sequences but they are not at all distracting, all thanks to the game’s powerful LOD system and efficient memory use.

We also wanted to briefly talk about how the game performs on the Xbox One and PC. It’s quite remarkable that Gears of War 4’s single player campaign renders the game at a 1080p resolution with minimal scaling according to the developer. The game targets on 30fps on the Xbox One with minimal drops during intense sequences. The PC version on the other hand is easily one of the most scaleable games we have ever tested. The game is literally loaded with a ton of benchmarking parameters, a graphical display of GPU/CPU consumption, in built performance parameters display and boy, don’t even get us started on the plethora of graphical options. With support for unlocked frame rates, supersampling to 8K resolution and GSync, Gears of War 4 includes an insane number of variables such as Dynamic Resolution, Tiled Resources, Light Shaft Quality, Screen Space Reflections, World Level of Detail, Character Texture Detail and a couple of other parameters that can be notched up to the Insane setting. 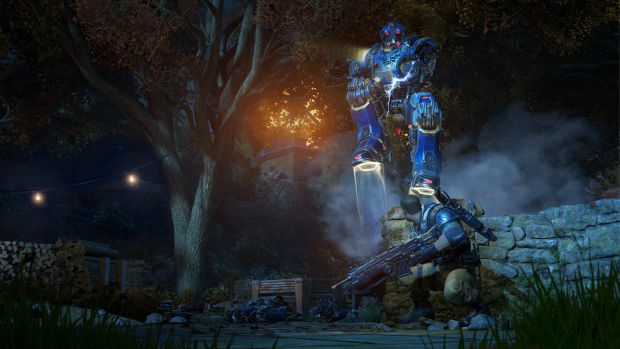 "For Xbox One owners, Gears of War 4 marks a new era for video game visuals. It’s without a shadow of doubt the best looking games on the system and it really makes us question the optimization process of other developers who have pushed out AAA games with sub-1080p resolutions throughout."

Gears of War 4 scales well across a number of hardware configurations. We first tested the game on a medium hardware consisting of an AMD FX 8350, 8GB of Memory and Raden R9 290x and we notched up everything to Ultra including the Insane parameters, and much to our surprise we were consistently running in the range of 30-50 frames per second. Notch it down to the High setting and you will most likely achieve a rock solid 60fps. This is extremely surprising since most first party titles from Microsoft on Windows 10 have largely been resource intensive. Testing the game on a GTX 1080 at 4K resolution resulted in an average fps of 43 with the fps never dropping below 35. At 2K, the frame rate never dropped below 64 with the average frame rate above 88. On the RX 480, a 1080p resolution delivered a minimum frame rate of 69 and an average frame rate of 87 with 2K resolution achieving an average fps of 55 with the lowest drop being 48. Overall, this is by far one of the best optimized PC games available on the market. Just make sure you grab those updated Nvidia and AMD drivers for your respective GPUs.

In the end, whichever platform you play Gears of War 4 on, you will be pleased to know that it’s a great performer. Amidst Microsoft’s woeful handling of the Windows 10 store (we had to download this game almost twice due to the store’s terrible downloader), Gears of War 4 is a shining light, a ray of hope that Microsoft are looking to take their PC initiatives to the next level.

For Xbox One owners, Gears of War 4 marks a new era for video game visuals. It’s without a shadow of doubt the best looking games on the system and it really makes us question the optimization process of other developers who have pushed out AAA games with sub-1080p resolutions throughout. If you are a Windows 10 or an Xbox One player, you owe it to yourself to experience this game. Although the game does not make drastic improvements in the gameplay and instead relies on the “don’t fix if it, if it ain’t broken’ formula, it does push the series ahead into exciting new directions. If the graphical jump from Gears of War 1 to Gears of War 2 was exciting we can’t wait to see what The Coalition can achieve with the inevitable Gears of War 5.