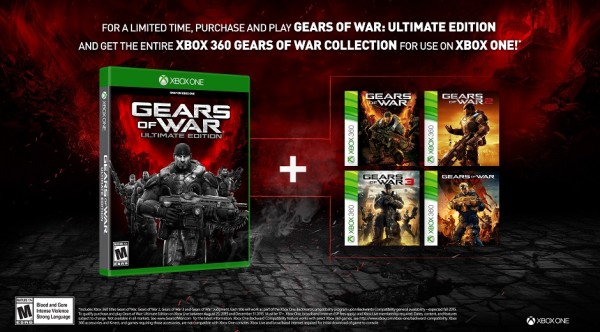 Owners of Gears of War: Ultimate Edition will be getting all four Xbox 360 Gears of War games – including the original, unaltered 2006 Gears of War which set the franchise in motion – for free on December 1, as they had been promised. The games will run on the Xbox One via the console’s backwards compatibility feature for Xbox 360 games and software.

To make sure you get to avail of this offer, all you need to do is to play Gears of War: Ultimate Edition once before December 31- as long as you do this, you will get the token to download all four Gears of War games. The games will automatically be added to your library, and all you have to do is to install them. The games will be fully functional, including all of their online functionality, intact.

Gears of War: Ultimate Edition was the Coalition developed remake of the 2006 Gears of War, a full reimagining of the game in the vein of the Halo Anniversary remasters. It released exclusively on Xbox One in August, though it is slated to come to PC some time in the future too.