Uh, oh. This is a pretty huge bomb for people thinking that the Wii U will be on par with the Xbox 720 and PS4 when it comes to technical prowess.

Epic Games had confirmed at GDC, which was mentioned yesterday on Twitter by Geoff Keighley, who is the Spike TV host that Unreal Engine 4 isn’t for the Wii U.

He responded to a tweet where someone asked whether the engine will be on the Wii U, to which he replied quite confidently, “No, at GDC Mike Capps said Wii U will be Unreal Engine 3.” 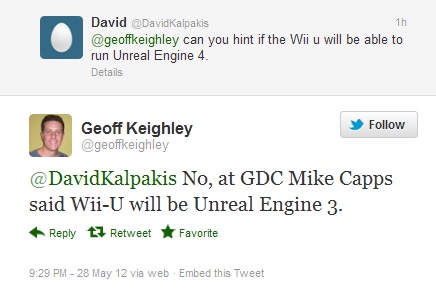 He also revealed that during the next gen episode on GTTV, Unreal Engine 4 prototypes will be shown which is running in real time. A demo about a monster erupting from the lava will be there too.

What monster? Check out these screenshots here, which show the first glimpses of Unreal Engine 4.