Ghost of Sparta Hands on Impressions

So recently I got a chance to play a particular section of the upcoming Ghost of Sparta and I am please to inform that the game will be no different than its predecessors. The team at Ready at Dawn studios has managed to bring the rock steady game play from Chains of Olympus and have also integrated a few cool moves from Kratos’s last adventure on the PlayStation 3. 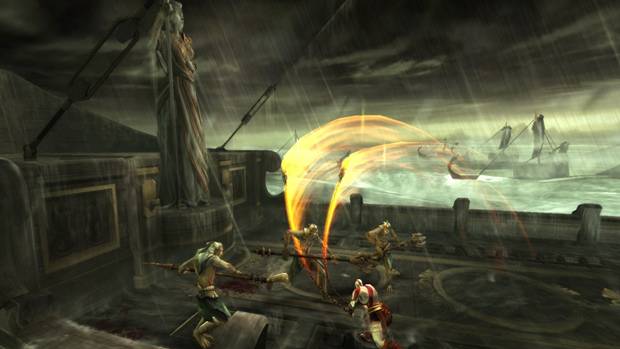 So we basically got a chance to play about 15 minutes of the game which pits Kratos against a wide variety of new foes in the game. The demo that we played begins with Kratos held in a ship. This section of game play is pretty similar to the one we played in the original game where Kratos takes on heaps and heaps of villains. The controls are obviously are very much similar to Chains of Olympus, but this time Kratos on the PlayStation Portable is equipped with a few new moves. One of them is the popular feature from the last game on the PlayStation 3, the ability to pummel though an enemy and take him along with you and ram in to an object or a group of enemies.  Much of the game play is still centered on hacking and slashing and surprisingly even after 6 years, this feature never feels old. It’s really a different experience with Kratos using his blades with all the anger and vengeance, and the same experience is present in the 15 minutes that I played this game. 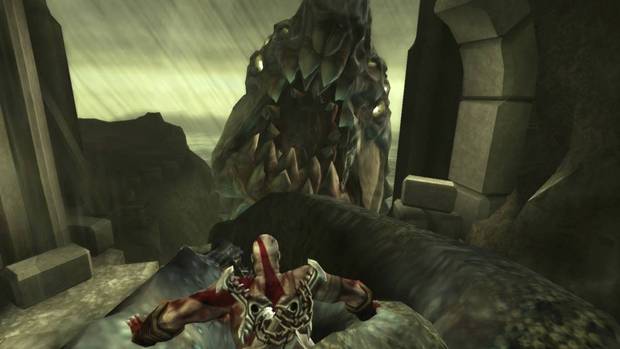 This thing does not know what it is dealing with.

Kratos can also use a new Magic ability called “Eye of Atlantis” with the help of which you can electrify the bad guys.  Well you are going to need all the magic and the amazing weapons, since you are going to beat some of the craziest boss seen in any of the games before. The Scylla boss fight takes place in three phases. First off, you have to clear your path blocked by the tentacles of this huge Sea Monster. After using your Spear, yes, Spear, against the tentacles, Scylla will finally show itself and throw Kratos to a nearby beach. The second phase takes place in the good old fashion way where you have to fight against the monster face to face. After kicking his butt, and running through a series of Quick Time Events, the poor monster retreated.

Thereafter, we got a chance a chance to explore the interiors of the island and obviously faced off some of the same enemies again. One of those enemies was an Atlas-esque creature which we managed to take care of using our awesome spear, but all of a sudden the Scylla attacked Kratos again but much to his misfortune he was sliced and diced at hard. After a few moments, we see the Scylla crawling on one of the pillars and the demo ends with a quick zoom in effect on Kratos.

Overall I just can’t get enough of the demo and want to play the entire thing. But unfortunately we have to wait till November 2nd, because that is when the game hits the retails shelves.