Taking a look at what we’ve seen of Sucker Punch’s open world title so far.

While we’ve yet to see a concrete release date from Sucker Punch, Ghost of Tsushima is looking to be one of the most visually impressive titles on the PS4 to date. With the PS5 now officially confirmed and arriving in just a year, it’s likely to be one of the last major PS4 exclusives before the ninth gen platforms arrive.

The year before a new console release has always been an interesting time for exclusives. With developers, especially first and second party studios, having spent so much time familiarizing themselves with the hardware, you get games that push the visual boat far out there. In the seventh gen, we had Halo 4 and The Last of Us on Xbox 360 and PS3 respectively. The eighth-gen remasters of these two titles say everything there has to be said about their visuals: these were spectacular swan songs for their respective consoles, and they held up well into the next generation.

With the move to the ninth-gen, it’s likely that late-gen exclusives like Ghost of Tsushima might hold up visually for even longer. Shuhei Yoshida, President of SIE Worldwide Studios was particularly impressed with this game’s visuals. In an interview with Famitsu, he was all praise for the game, saying: “Ghost of Tsushima is also amazing.I’m overwhelmed by its graphics. When I play it, it looks so beautiful that my hands stop. It’s a game that doubles the beauty of the Japanese landscape. I’m looking forward to seeing such beautiful scenes.” Ad he’s right- Ghost of Tsushima looks amazing, and we have a good feeling that it will hold up visually, even in the PS5 era.

This is in large part due to the generational changes in hardware between the PS4 and PS5. The PS4 (and the PS4 Pro) have always had powerful graphics hardware. By itself, the 4.2 TFLOP Polaris-based GPU in the PS4 Pro compares well with PC hardware, even today. It isn’t too far off from the budget GTX 1650. On the CPU side of things, though, the eighth-gen consoles have appallingly bad hardware. They’re on par with high-end quad cores from circa 2007 like the Core 2 Quad Q6600. Whereas GPU performance will likely see a 2X uptick in the coming generation, CPU performance will see a meaningful 4-6X uptick. What this means is that graphics per se might not become drastically better, though world-building, AI, physics, and the depth of mechanics will almost certainly improve. As such, it’s arguable that Ghost of Tsushima, even on the Pro is representative of what early PS5 games might look like. And with a gameplay trailer already on our hands, we thought it’d be worthwhile to check it out and do a technical deep dive. 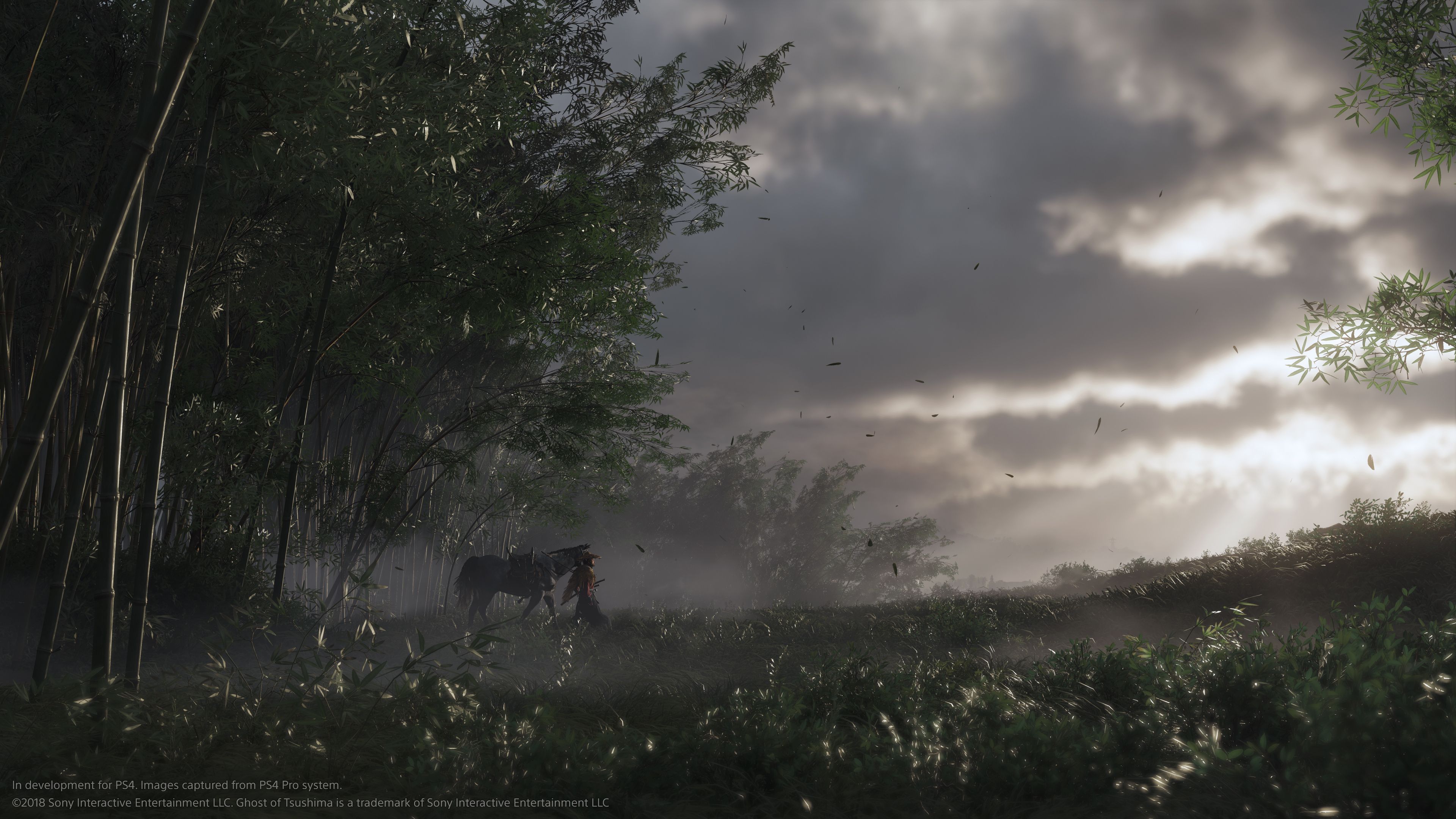 Right at the outset of gameplay trailer, we see two of Ghost of Tsushima’s technical highlights on full display for an extended period of time. The game features some of the best foliage rendering we’ve seen since Kingdom Come: Deliverance. The density of shrubs and grass is exceptionally high. Moreover, generous LODs and a subtle depth of field blur in the background all mean that you’re not exposed to immersion-breaking flat ground textures. What’s particularly interesting is the high polygon count of shrubbery. Games like The Witcher 3, which were praised for high quality foliage, had density, but the geometric complexity of the shrubs themselves wasn’t that high. Here, though, there’s attention to detail, even on individual leaves. Foliage appears to move sway in response to the wind. This is notable, both on the shrubs and on the bamboo thicket towards the left.

Apart from foliage, we see except use of volumetric cloud rendering in this frame. Volumetric clouds have become something of a need-to-have in recent games: Ubisoft uses them extensively in the recent Assassin’s Creed games. The technique is computationally expensive–especially for something that you will never get up close to over the course of the game. But volumetric clouds do much to fill out skyboxes and can add tremendously to the atmosphere of a game. This is what we see here in Ghost of Tsushima. The cloud add immensely to the overcast, dusty, wartime atmosphere that Sucker Punch is aiming for. Color grading and a grey skybox could’ve done the trick, but the sight of roiling clouds above, contrasted with the dust and debris below, build an almost tangible level of atmosphere.

For a seven-second cut, we get a very close-up view of Jin, Ghost of Tsushima’s protagonist. High polygon character models are something to be expected this generation. Sucker Punch’s earlier work in Infamous Second Son had some very detailed character rendering. But Ghost of Tsushima appears to take things to the next level. When the camera pans across Jin’s hat, what’s remarkable is that the individual strands of straw are each rendered with multiple polygons. This is one of those areas where we’d just expect a normal-mapped texture, but we get real geometry instead. A consequence of this is that the bottom part of the hat receives ambient occlusion thanks to the top part occluding the lighting.

This is a very subtle effect, but it wouldn’t be possible to approximate convincingly with a texture. As we get to Jin’s face, we get that same level of high geometric complexity. Poly counts are high enough that there are no chunky edges to his face, nose or ears. Tessellation is likely being deployed here to round off edges. We get a good glimpse at how the game handles skin shading as well. Subsurface scattering is in effect and it prevents Jin’s face from taking on a “plasticky” sheen. Moreover, we see detailed normal-mapped textures in place, bringing the illusion of depth to the faded scar on his cheek. 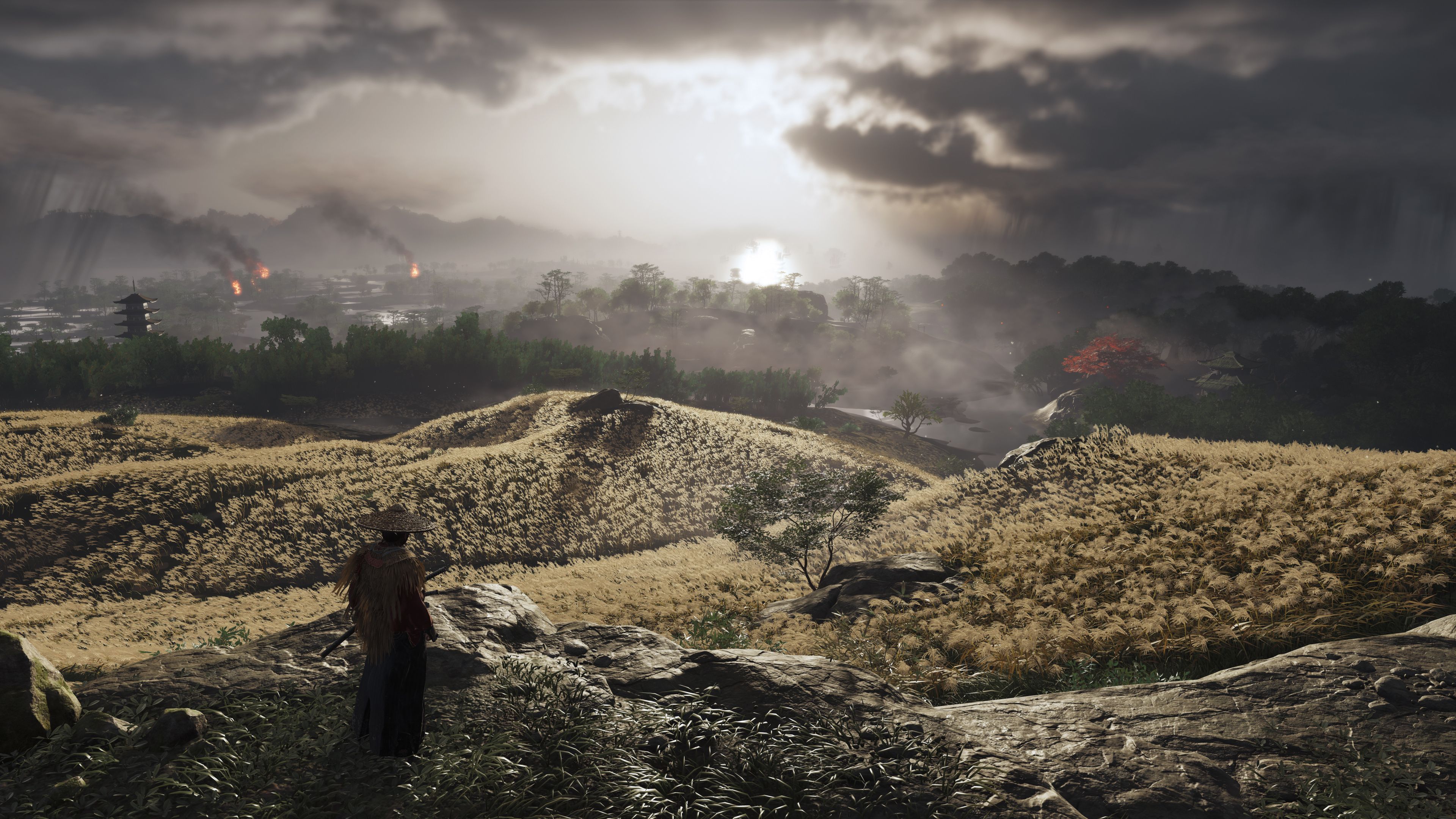 Ever since Battlefield 3 introduced terrain tessellation ages ago, the ground in games has gotten bumpier than ever. Assassin’s Creed Odyssey makes great use of terrain tessellation to create the illusion of geometric depth, but the constant tessellation pop-in in that game is noticeable and distracting. We also notice that Ghosts of Tsushima makes extensive use of tessellated terrain as well, to convincingly recreate ground surfaces. Thankfully, LODs are pushed out a bit further here, limiting pop-in. Tessellation creates real geometry, as opposed to effects like Parallax Occlusion Mapping. As you can see, the rocky terrain at the bottom left is made up of real, polygonal rocks. Because they’re geometry, they also accurately represent lighting effects. The terrain is in shadow and thick swathes of AO extend from each rock. This really grounds the terrain, and makes it so much more than a flat, texture-mapped surface.

Ghost of Tsushima’s LODs have impressed ever since the gameplay trailer arrived over a year ago. Especially in open world games, LOD scaling is a bugbear for visuals: it doesn’t matter if your world looks great up close–it still looks like a PS2 game at a distance. There are, naturally, reasons why aggressive LOD scaling has been an issue this generation. The more objects you’re rendering at at time, the CPU calls you have to make, and the faster you run up against the Jaguar cores obvious limitations. What Sucker Punch has managed to do with the LODs here is truly remarkable.

We have high grass density that’s maintained for over 100 meters. The smart use of terrain sculpting–with hills in the way–creates the illusion of grass extending forever, without actually having to render that much. But what’s on display is remarkable: density starts out high, and we see little dropoff in the distance. Moreover, objects continue to receive realtime shadowing for a considerable distance. Billboard trees are in use in the far background. However, they are complemented by real geometry on objects like far-off buildings. Together with the game’s heavy volumetric fog and distance depth of field blur, they maintain the illusion.

Extensive use of GPU-accelerated particles

Particle effects saw great generational improvement from the seventh-gen to the eighth-gen. GPU acceleration is par for the course now, allowing us to have dense particle volumes that react to then environment. In Ghost of Tsushima, particle rendering is front and centre thanks to the leaves that are perennially floating about the gameplay trailer. At any one point, you have dozens of leaves (their numbers increase exponentially later on) floating around the environment, all detailed and textured, and then landing and attaching themselves to the terrain. In the combat sections that follows, we see both blood and sparks being rendered.

Blood spray is rendered at a reasonably high resolution and settles on the ground. The sparks from clanging weapons during parries are a bit muted compared to the likes of Sekiro, but this fits in with the realistic aesthetic Sucker Punch is going for. Apart from this, the volumetric fog that’s on display the entire time is one of the finest implementations we’ve seen to date. Depending on the lighting conditions, you can actually see variations in the fog intensity and individual particle volumes in the fog. Considering the amount of looting, pillaging, and arson that’s going on in the game’s backdrop, volumetric fog with GPU-accelerated particles is one of the keystone visual effects here.

Sucker Punch spares nothing when it comes to Ghosts of Tsushima’s post-processing pipeline. We have a full set of post-process effects in place here, from motion blur to depth of field, ambient occlusion, to temporal anti-aliasing.

Camera blur and a high sample count per-object blur are both implemented in the game. Camera blur is subtle, but evident in the higher speed camera pans. Meanwhile, per object blur is easy to spot on the back of Jin’s shoes as he sprints. Because of the game’s overcast warzone aesthetic, ambient occlusion plays an outsize role in creating atmosphere here. We’re looking at a bespoke solution–that Sucker Punch has yet to specify–with great coverage and minimal haloing. The temple interior–which receives just a bit of external lighting, and the idols in particular, are great showcases for the game’s AO implementation. Depth of field blur is used sparingly but to good effect. We see a somewhat low-quality Bokeh effect during cutscenes. In actual gameplay, a very subtle depth of field effect is applied to the far horizon–this helps mask low quality LODs at extreme distances.

Screen-space reflections are deployed to good effect, and the reflections themselves are high quality. As Jin fights his way out of the temple, you can see (sigh, yet another) shallow puddle. Puddles and other wet surfaces with SSR have turned into something of a cliche this generation. We applaud Sucker Punch’s restraint in this respect–this is an environment that could be completely filled with SSR puddles and we had to work hard to spot one. Placed right at the broken entryway, it not only looks good, it’s actually plausible.

All in all, we don’t think Shuhei Yoshida’s reaction to Ghost of Tsushima was too much of an exaggeration. This is one of the finest looking games we’ve seen running on PS4 hardware. And as the ninth-gen rolls around, it sets a benchmark for what early PS5 games should look like in the time to come.