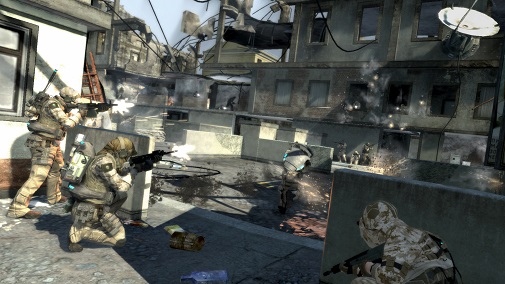 As we pass through the gale force winds of E3 and into the relative doldrums of the summer release window, it’s finally time to get around to Ghost Recon: Future Soldier. Ubisoft’s latest edition into the Tom Clancy franchise, although I understand that yet again his name is the only thing he is lending to it. Set in The Near Future, you’re part of the Ghost reconnaissance team of future soldiers -it’s a wonder Ubisoft have a marketing department at all- tasked with venturing around the world to hitherto un-touched locations in video games, following the trails of a plethora of bad guys, and girls.

Future Soldier starts proceedings by committing the cardinal sin of presenting a nicely-packaged intro trailer just before the start menu, only for it to be compressed to within an inch of its life, rendering it completely redundant. This worrying trend of taking some slick-looking game footage and making it look like a YouTube video shot with a toaster has been bubbling away for a while, the last game I can recall which didn’t do this was The Witcher 2’s Enhanced Edition, and that looked sublime. The only possible explanation I can fathom is to do with disk-space restrictions and fat has to be trimmed in any way possible, lopping off a hundred of so megabytes of nothingness isn’t necessarily a bad way to go.

Nicaragua is where the story begins, a country with so little international identity that Ubisoft could depict it as Rand McNally and nobody would be the wiser. Pretty much every location in Future Soldier is an unknown entity, this may be the first time Norway has been used as a location in any video game, ever. This attempt at garnering new locations yields very little, especially when they but possess very little identity. Single-player environments are well-realised and rather shiny, but somehow all seem to hold a sense of blandness That said, I still want to see a shooter set in Brussels with the colour palette of Flower. Future Soldier depicts an aggregated South American country via the medium of a tedious car segment, trying miserably to replicate the excellent intro of Call of Duty 4. 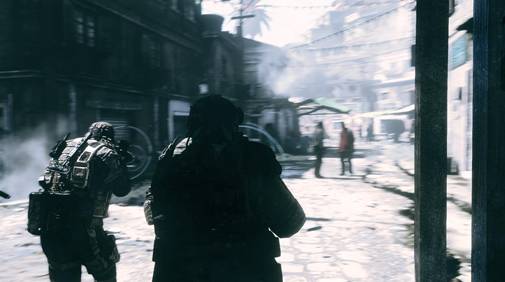 Ubisoft Red Storm’s preferred method of breaking up missions is to intersperse each with a boring car segment, perhaps in an attempt to convey the more mundane aspects of the future soldier’s existence, I don’t know. Okay, Future Soldier’s story line is never going to win any awards, but neither was it trying to. It’s simple and functional; it won’t knock anybody for six but nor will it disappoint to heavily. Story, schmory, this is a shooter about shooting and there’s very little wrong with that, it’s first-and-foremost about gameplay, with the online coming a close second.

As a ghost, you’re tasked with undetected infiltration, with only the occasional gun-blazing firefight, a few missions slap you across the face with an F if an enemy so much as gets a whiff of you or your buddies. To assist, the team are equipped with a prototype form of invisibility camouflage, working only when crouched. Except in the online, as it would almost certainly be a game-breaker, there it’s only for particularly immobile scouts. Most Tom Clancy games have featured a cover system of some sort, but never have they felt as fluid and free-flowing as this, working an absolute treat both in stealth, but also, through manic fire-fights, proving that systems like that really need gigantic reticle to be most efficient.

Sych shots are a nifty addition, as well as a handy stealth tool for silently bringing down up to four enemies. Tagged with RB, once all of your AI team-mates have a clear line of sight, shooting will bring down every enemy in a great big heap, simultaneously. The AI are helpfully stealthy, not once being the ones responsible for giving the game away, effectively manoeuvring without so much as a peep from them. 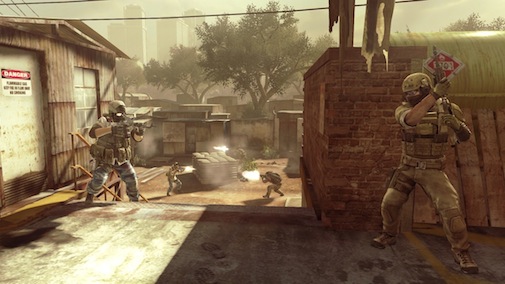 The strange thing is Future Soldier has a seperate co-op mode, yet the single-player feels like it was specifically designed to cater for four, even down to the ‘waiting’ AI players to get into certain positions before the game progresses. Furthermore, local co-op is nowhere to be found, instead a token wave-based mode is present named Guerilla. It’s fun, yes, but seems to lack the covert finesse of its single-player brethren.

Competitive multiplayer is where Future Soldier stands proudest, every map feels carefully crafted and built from the ground up, bearing vague resemblance to the single-player but no copy-pasted buildings are to be found here

The jewel in the multiplayer crown is undoubtably Gunsmith, possessing 600 individual assets with a staggering 10m+ customisation possibilities, and the way level progression works. Rather than unlocking components to a gun either at certain levels, or when a certain proficiency is achieved, instead each rank-up affords a single point for each faction, to be spent on any single add-on for any already unlocked weapon, aside from ammunition. This means that guns can essentially be customised in any way possible right from the word go, quickly negating many of the imbalance shortcomings some games can suffer from. 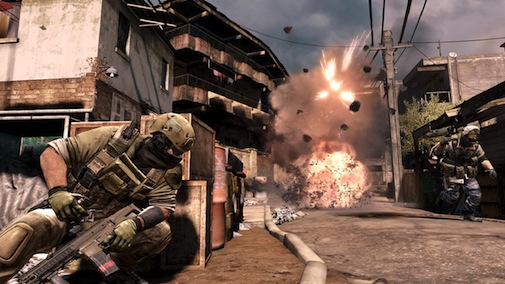 In most games, shotguns are almost deliberately underpowered, very few gamers holding them in particularly strong regard. That is, until now, shotguns now feel brutal and devastating at close range, especially with Dragon’s Breath ammunition. As the same suggests, Dragon’s Breath is a form of incendiary ammo, providing both some very rewarding, but also often deeply disturbing.

Before another weapon is unlocked, both types of gun will more than likely be fully customised, so early-game weapons aren’t necessarily left in the dust like you may expect. One strange choice is that factions are customised independently, meaning twice the numbers of weapons, but is there any real need for this?

Gunsmith was also specifically designed for Kinect and whilst I couldn’t use it in my bedroom given that I’m not the owner of my own galaxy, I got to experience it first-hand at a preview event and offers one of the best Minority Report experiences yet. Not so clever is the the Kinect firing range, requiring clench fists to be opened to fire a gun. Hold your arm out straight and repeatedly fully open and close your fist. Hurts, doesn’t it? I can see why it was included, if you’re going to have Kinect in a shooter you may as well afford some glimpse into being able to shoot with it, but it simply doesn’t work in this form. 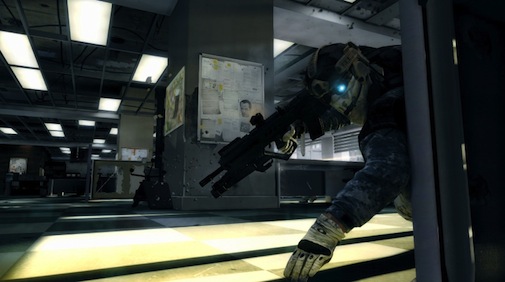 In my preview, I speculated that Future Soldier wouldn’t necessarily appeal or cater to newcomers, or those of a CoD persuasion, even going as far as saying this is a ‘clan’ game, but I was simply wrong. It does certainly provide a different experience to the big shooters of 2011, but the feel and balance of the online play really hits the spot, providing a more frequently satisfying experience. The pace is certainly slower, but the game is all the better for it. Okay, it’s certainly a far more team-focused title than your Modern Warfares and much more fun will be had with friends than alone, but the sheer cohesion which the multiplayer provides will certainly have me playing for months to come.

Gunsmith, weapon customisation and the entirety of the online play. Shotguns feel proper and burning enemies to death has its sadistic charms.

Final Verdict:
SUPERB
The sheer cohesion which the multiplayer provides will certainly have me playing for months to come.
A copy of this game was provided by Developer/Publisher/Distributor/PR Agency for review purposes. Click here to know more about our Reviews Policy.