While GigaBash ends up being a one-trick pony on account of its many shortcomings in the content department, that cannot detract from the otherwise solid gameplay.

The elevator pitch for GigaBash is an enchanting one. It’s a game that allows you to play as giant monsters and mighty heroes as they duke it out against each other in a variety of highly destructible environments. And Passion Republic Games has mostly delivered on its promises, albeit with a few notable flaws. In its current state though, GigaBash is really a one-trick pony and lacks the depth and variety that many of its competitors offer.

GigaBash is an arena brawler in the vein of something like Power Stone, and your goal is to pummel down your opponent with hard-hitting attacks which will ultimately send them flying miles away from the arena. Immediately upon booting GigaBash, you are greeted with a detailed tutorial that takes you through the basics of fighting as these giant monsters. The square and triangle buttons are used for unleashing normal and special attacks, and holding them unleashes a stronger variant of these attacks. You can also perform variations of these attacks by pressing them in the air. 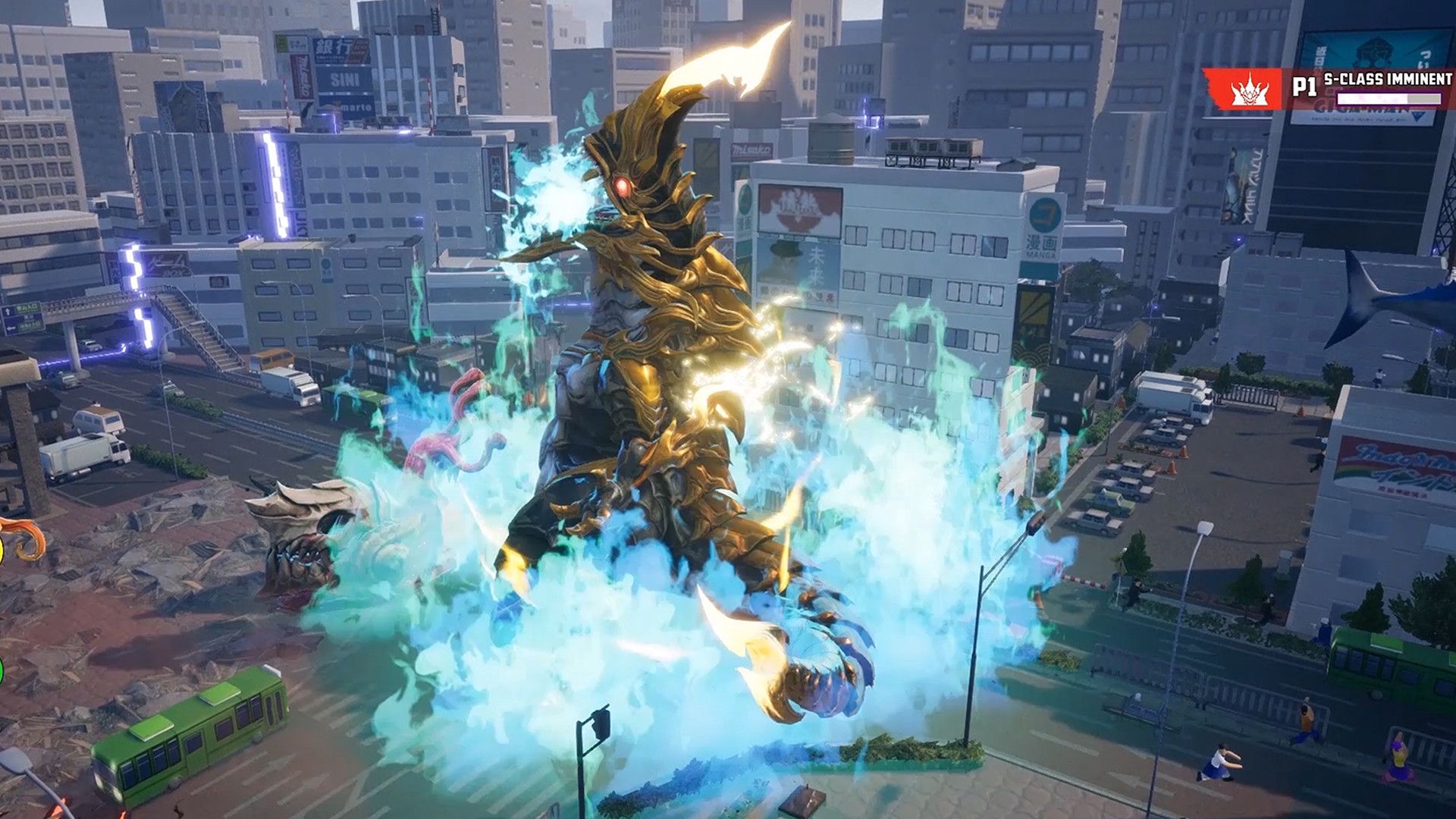 "GigaBash is an arena brawler in the vein of something like Power Stone, and your goal is to pummel down your opponent with hard-hitting attacks which will ultimately send them flying miles away from the arena."

The left trigger is used to block and parry moves and can be chained with the attack buttons to unleash defensive attacks. The right trigger performs a quick dash, which can be chained with attacks to rush into an enemy. Last but not the least, you can also grab your opponents with the press of the circle button and punch them or throw them accordingly, or better yet, pluck buildings and structures from the battlefield like a flower and thrash your opponents with them.

While all that sounds overwhelming at first, it doesn’t take much to get the hang of it – and soon you will be chaining together heavy and light moves, dodging through strikes, and following up with rush attacks intuitively. The combat system is great overall, but a major gripe that I had was a lack of a lock-on mechanic. I would often find myself attacking in thin air while my opponent was just an arm’s reach away since some characters and attacks can have really short range and attacks don’t magically connect to your opponents. This becomes even more of an issue when there are 3 or 4 combatants on screen, and you need to direct your attacks toward a single foe but you end up clumsily hitting nothing like a joker.

Thankfully, GigaBash’s roster of characters is a humble one but has enough variety amongst them to keep battles interesting. Take, for example, Gorogong – an angry beast who excels at close-quarters combat as it uses its heavy fists and ground slams to make short work of its opponents. This is very different from Pipijuras, a giant alien crab that uses its projectile beams to keep its opponents at bay. Then there is Woolley, a cutesy giant Yeti that can swallow opponents or engulf them in a rolling snowball and send them flying towards the edge of an arena. 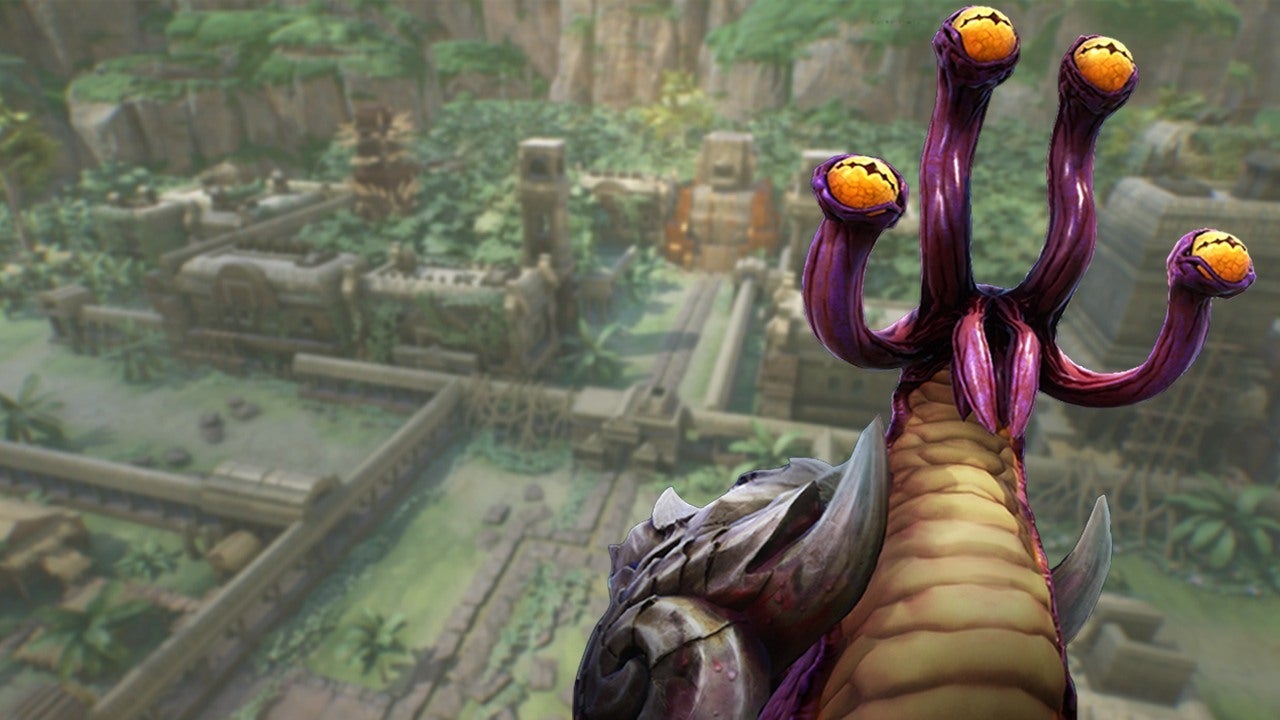 "GigaBash’s roster of characters is a humble one but has enough variety amongst them to keep battles interesting."

There are only 10 characters to speak of (some of which need to be unlocked by playing) – which is a bit disappointing when competitors (such as MultiVersus) feature dozens of different characters. Furthermore, they also lack the charm that the likes of Mario or Bugs Bunny have. During my limited time with the game, I found the balance to be hit-or-miss – as some tactics work especially well against some opponents which can and will be abused endlessly for some cheap wins.

GigaBash features 2 major options for couch play – a free-to-play brawl mode that can have up to 4 players and a 2v2 team battle. As you deal damage to your opponents or cause destruction to the environment during these fights, you gain a special currency called GigaEnergy. Once that reaches a certain threshold, you can transform into an enlarged version of the character, called the S-class Titan. While your moves and mobility options remain the same, your attacks deal more damage and you take less damage from opponents during this buffed-up period.

Additionally, you can also pick up a power-up that unleashes a devastating Ultimate Attack on your opponents. As such, you need to balance your attention between dealing damage to your opponents and gathering as much GigaEnergy as quickly as possible. But even so, understanding when to transform and having some synergy between teammates is the key to winning battles since that can easily turn the tides of battle towards or against your favor. All in all, GigaBash finds a good balance between skill and strategy while also remaining accessible for newcomers to the genre.

"GigaBash finds a good balance between skill and strategy while also remaining accessible for newcomers to the genre."

There are a ton of arenas where you can duke it out against your friends or the CPU and these range from an ancient tribal village to a generic training area to the center of a bustling metropolis. Some of these arenas have their own gimmicks – such as having a river that divides the arena into two halves or a sandstorm that kicks in periodically and obscures your vision of the arena and the enemy. Others are pretty standard in comparison, but the sheer destructibility of the environments makes them different every time you brawl. For instance, you may use the plentiful buildings as cover at the start of a fight, but as the cover gets destroyed – you might be forced to get up close and personal with your opponents.

There’s also a Mayhem mode that features a variety of minigames, but since that can only be played in couch co-op with no ability to invite friends through online play  – so I couldn’t experience what that mode has to offer. Over on the single-player front, GigaBash features 4 short storylines centering around 4 of the characters in the roster. It isn’t anything particularly captivating but serves as a good way to get comfortable in playing these characters as you face varied opponents which require different strategies to overcome.

With the exception of the story and Mayhem mode, Team Battle and Free-For-All can also be played online. In addition to this, you can also play an unranked 1v1 battle in online mode. But in my dozens of attempts trying to find a match over a span of roughly a week both pre-launch and post-launch, I have yet to get into an online match on the PS5. Hilariously enough, I’m even searching for an online match while writing this review to obviously no avail. 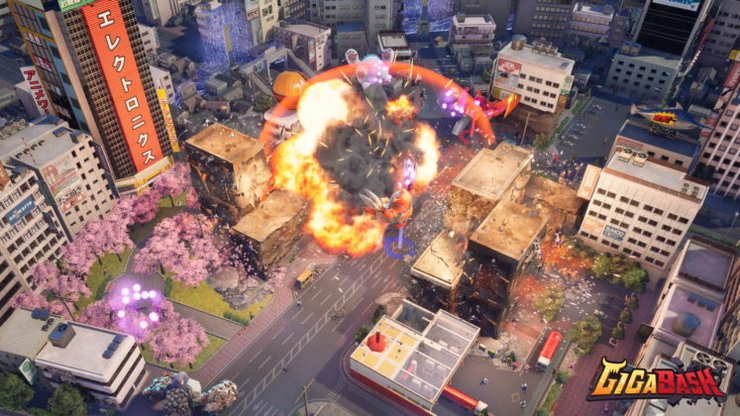 "But in my dozens of attempts trying to find a match over a span of roughly a week both pre-launch and post-launch, I have yet to get into an online match on the PS5."

But even if you exclude the horrendous matchmaking experience, it’s hard to get past the fact that GigaBash is very light on content. You gain XP upon completing matches, but that only unlocks Extras such as additional lore information or background music. Playing as a specific character also accumulates some Titan points, but that didn’t seem to have any notable effects on the actual playing experience. There aren’t any battle passes or character upgrades to pursue or online ranking systems, or really anything that would want you to keep coming back for more.

In its current state, GigaBash is really something that would serve you well for a couple of hours as a fun time with friends, but nothing more than that. And that’s a shame because the core fundamentals are really fun, and with some major updates (both on the gameplay and content fronts) and better online infrastructure – GigaBash has the potential to turn into something special.

Simple and fun combat with a strategic element to it; varied arenas; destructible environments.

Final Verdict:
GOOD
While GigaBash's core gameplay systems of brawling are solid, everything surrounding that experience - the online component, content offerings, roster - are underwhelming when compared to contemporaries.
A copy of this game was provided by Developer/Publisher/Distributor/PR Agency for review purposes. Click here to know more about our Reviews Policy.