God of War: Ghost of Sparta was one of our favourite games last year, and anybody who read our review, in which we gave it a 9.5/10, would know how much we loved the game, and Chains of Olympus was no damp squib either. Both the games successfully compressed the bloody and brutal God of War action and stories we had all come to love onto the PSP and pushed the system to its technical limits and beyond, turning out to be one of the best looking games for their respective years not just on handhelds, just in general- period. And now, both these games have been remastered in glorious high definition and brought over to the PS3. Question is, do they still hold as well as they did on the handheld system? 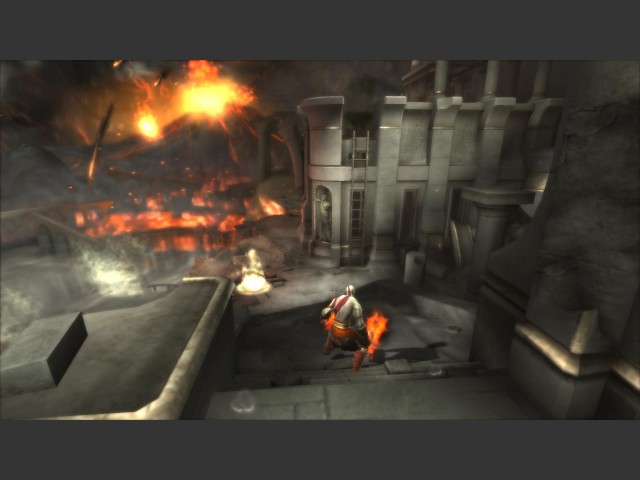 Kratos just destroyed an entire city. And he doesn’t care, ‘coz he’s a selfish asshole.

To answer that question simply: pretty much. God of War: Origins Collection does have a few issues, and it is apparent several times that these are handheld games that have been ported over to a console, but at the end of the day, Origins is a great collection that manages to bring over Kratos’ PSP adventures to the PS3 successfully.

The first difference you’ll notice on the PS3 is that the graphics have been overhauled, and both the games, especially Ghost of Sparta (being just one year old and more technically advanced than many contemporary console games), look extremely good, with great animation effects, awesome environments presented with great detail and some background vistas and backdrops that have been crafted so beautifully, they will take your breath away for sure, even if you saw them on the PSP 3/1 year(s) ago. However, Chains of Olympus does show some rough edges, with water effects appearing a bit unwieldy, and the character models looking a bit pixelized, but overall, both the games look very good. The difference in the visuals of the HD remastered versions and the PSP originals is clearly visible. 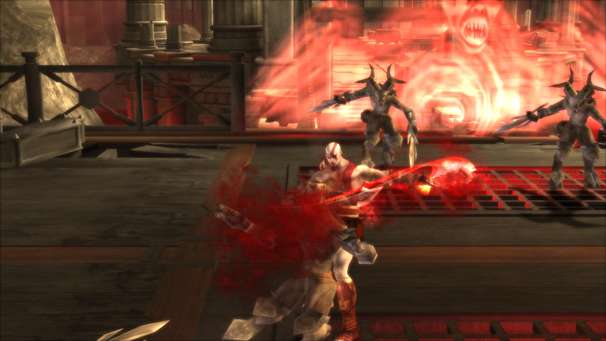 The combat feels just as satisfying and brutal as ever, and with the addition of rumble, it packs that much of an extra punch.

The gameplay is, obviously, the same as the PSP versions. For those of you who don’t know what God of War is all about, here’s a short description. You’re a bald badass who has two blades chained to his arms. He uses them like a yoyo and uses his rippling muscles to tear apart his enemies as he moves from one place to another, messing with the Greek gods an titans. The gameplay has boss fights, QTEs, puzzles and some platforming elements. Every time you kill an enemy, you get orbs, which you can use to upgrade your weapons and magical abilities, which you will keep getting more of as you progress through the game. And that’s about it. Simplistic in theory, but awesome and brutal when experienced.

It is because of this simplistic nature of the games that you will be able to pick up the games easily and play them whenever you want to. Kratos’ atrocious deeds will make you groan sometimes, since he can go overboard with his badass act a bit (read: a lot). The story of Chains of Olympus, while providing a much more personal story than that of Ghost of Sparta’s, feels a bit too straightforward and bland, and you’ll feel there are several parts in the game that just drag on and have no real purpose. Seeing that COO’s a game that can be finished in 3-5 hours, that’s not really a good thing.

Ghost of Sparta, though, is as visceral as ever, with the story holding up even now, the boss battles feeling as epic as ever, the graphics looking good enough to rival recent PS3 titles and the same brutal combat that we have all come to love. However, the controls might feel heavy sometimes, since they were built especially for the PSP’s less intuitive analog nub, and now, with the DualShock analog sticks, it can feel as if Kratos moves too heavily. However, it isn’t much of a hindrance, and additions like rumble feedback and evade controls being mapped to the second analog stick are very effective tweaks. 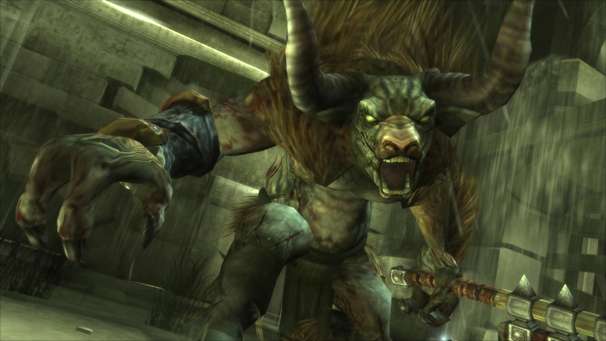 This dude’s anger has nothing on Kratos’ fury.

Ultimately, yes, God of War: Origins Collection has a few rough edges, and it does feel like a bloated handheld game oftentimes. I would recommend that those of you who have a PSP buy Chains of Olympus and Ghost of Sparta on the handheld rather than on the PS3, but those of you who do not have it should definitely go ahead and buy the collection without thinking twice.

Both the games feel as awesome as ever; Ghost of Sparta looks particularly good; Bloody and brutal combat as satisfying as ever; Epic set-piece moments take your breath away

Some rough textures here and there; Both games are very short, and can be collectively finished in under 10 hours; Controls feel heavy sometimes

Final Verdict:
SUPERB
God of War: Origins Collection is an awesome HD rendition of Kratos' two handheld adventures, and definitely recommended to anyone who has not yet tried out the PSP originals.
A copy of this game was provided by Developer/Publisher/Distributor/PR Agency for review purposes. Click here to know more about our Reviews Policy.