Every time I play a movie tie-in (mostly because I have to review it), I go in cautiously, expecting nothing but a half assed sorry excuse for a game. Every time I let my hopes get high, I end up hugely disappointed. Like when I first saw the gameplay footage of Harry Potter and the Deathly Hallows- Part 1, I thought it would be a decent game (yeah, I actually thought it would be good). When I played, it turned out to be the biggest piece of shit I’d ever come across in my entire life.

My reaction when I was asked to review Green Lantern: Rise of the Manhunters, then, was skeptical. I expected the game to be an okay, bargain bin worthy title. When I played it, though, I was pleasantly surprised. I’m not saying the game exceeds all expectations, or that it is an absolutely brilliant game with no flaws. What I’m saying is that what you get when you play Manhunters is a game with several flaws that keep it from being the wonderful piece of software it could’ve been, but an extremely fun game with some great moments nonetheless. 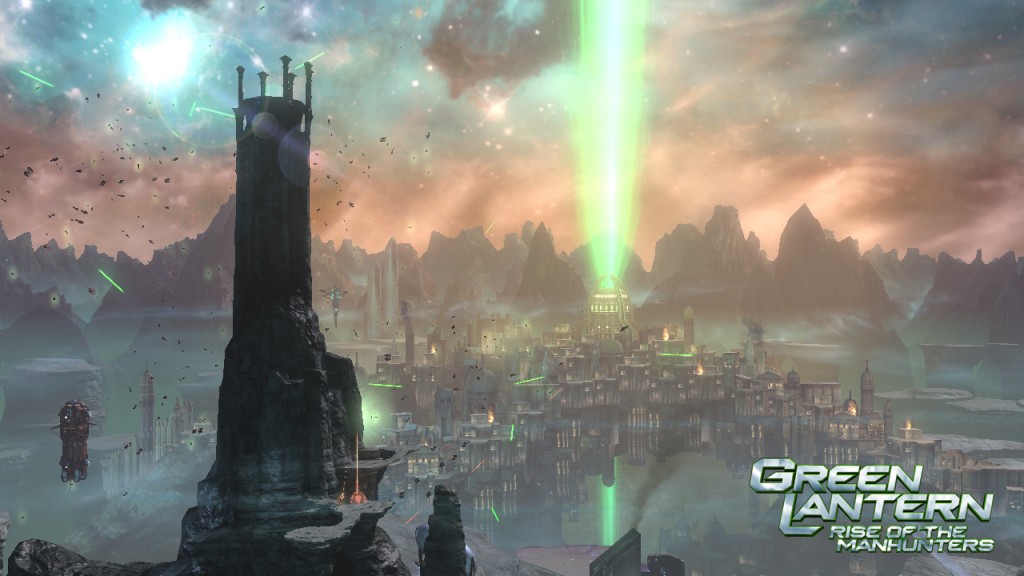 The visuals of the game are surprisingly good.

On a technical level, Green Lantern is flawless- it has no screen tearing, no framerate drops, no texture pop-ins. Its sound design is great, its voice acting is great- especially since Ryan Reynolds, the star of the movie, lends his likeness and voice as Hal Jordan-, its visuals can hold their own with some great artistic flair, it has good facial animations, and it boasts of some very well directed cut scenes. It is, in common terms, a highly polished games, with no actual technical flaws and glitches.

What takes away from the experience of the game is not any glitch or flaw. The game just feels too derivate and repetitive sometimes, and it feels like it has a lot of missed opportunities. Green Lantern had the potential to be one of the best superhero games around, but it’s missed out on a lot of that potential.

The gameplay of the game is pretty simplistic- the game basically contains of two kinds of levels. Either you’ll be tearing through hordes of Manhunters on the ground, or you’ll be taking part in space-faring missions.

Now, the ground missions are great fun. The hack and slash influence on the combat is clear- the camera is fixed at a single point, you can string together combos by performing light and heavy moves, perform grabs, launch your enemies into the air, evade attacks by running around. It’s all tried-and-true, and comes across as derivative a lot of times, as mentioned above, but given how solid the controls are, and how strong and satisfying the combat feels, you’ll most probably forgive the it for its lack of originality.

What makes the combat extremely fun, though, is the ring that you wear (being a Green Lantern). With your ring, you can create objects made of green hard light. These can range from simple swords  and hammers to anything as crazy as fighter jets and jetpacks. You can shoot green energy balls with your ring as well. As you level up throughout the game, you get experience points to unlock new powers for your ring. All this coupled together keeps the combat fresh. 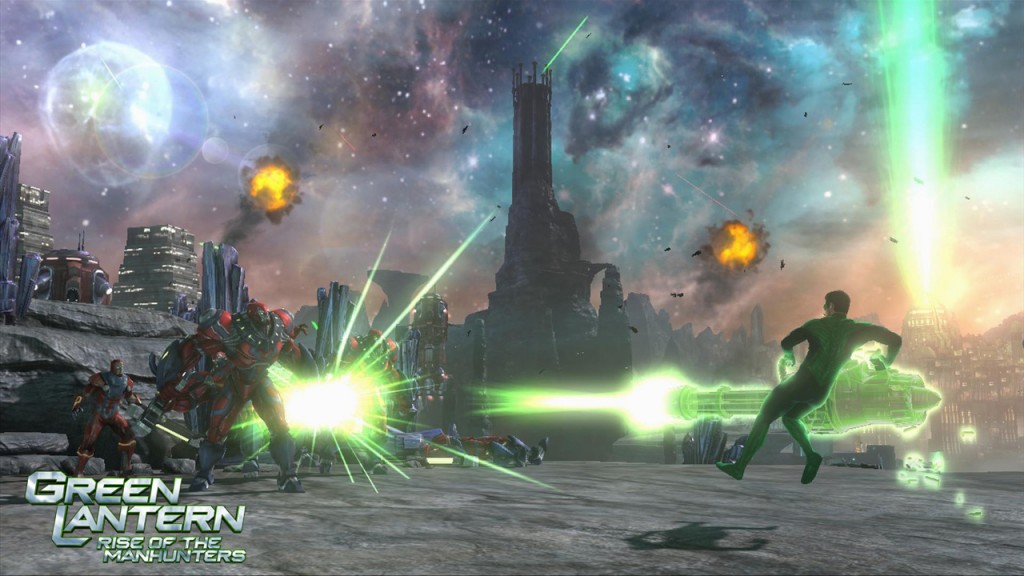 The combat is a hell lot of fun, and the ring powers are a blast to use.

But this is one area where the developers could have truly gone crazy. They could have given us a lot more crazy, innovative weapons to create with the ring, but they stick to conventional weapons for the most part, with a few interesting weapons thrown into the mix. Overall, it feels like a missed opportunity.

The space-faring missions are just plain boring. You fly through space, with lots of enemy dropships and drones coming at you. You move around the edges of the screen and shoot at them, with no ammo restriction. You cannot even use your ring powers, you just shoot at them. In shorts, they’re repetitive and boring. It would have been okay if there were just a couple of such missions in the game, but since that’s not the case, the game loses a significant amount of points because of this flaw.

The gameplay, overall is pretty repetitive. The upgradability of the ring and the RPG-like system offers some depth to the gameplay, and it keeps things fresh to an extent, but not so much so that the combat doesn’t seem repetitive. Add to that the fact that the game has only two kinds of levels, and you basically feel like you’re doing the same thing over and over again.

The co-op does add some more value and replayability to the game, and playing the game with a friend is definitely the way to play it, but it doesn’t help much. It would have helped if the game had a longer campaign- I didn’t like the fact that the game took only around six hours for me to finish it. 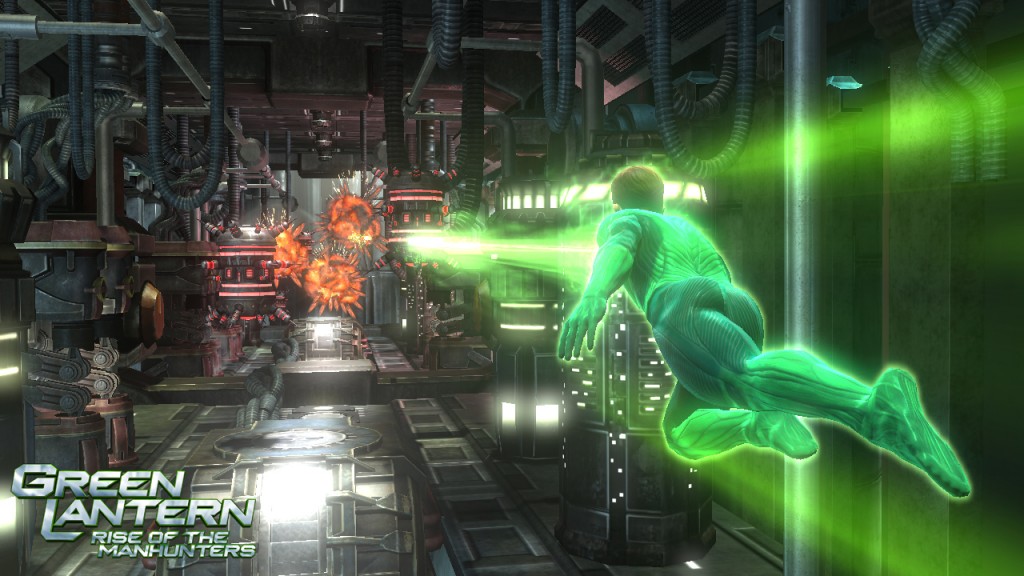 These on-rails space faring missions bring down the experience several notches. If only they were fewer in number…

Ultimately, Green Lantern: Rise of the Manhunters offers an extremely fun yet flawed experience. The game could do with a longer campaign, more varied mission structure and less space missions (or at least more entertaining ones). But as it stands now, with some great production values, entertaining combat and a great co-op mode, this game is definitely worth your time and money.

Too short; Space-faring missions are boring and very abundant; Weapon options not fully realized; Feels a bit derivative at times; Mission structure could have been more varied

Green Lantern: Rise of the Manhunters does nothing new, and it feels derivative and repetitive at a lot of times, but it delivers excellently where it matters most: the fun factor.

A copy of this game was provided by developer/publisher for review purposes. Click here to know more about our Reviews Policy.
Tagged With: Green Lantern, Green Lantern: Rise of the Manhunters, ps3, Warner Bros Interactive, xbox 360