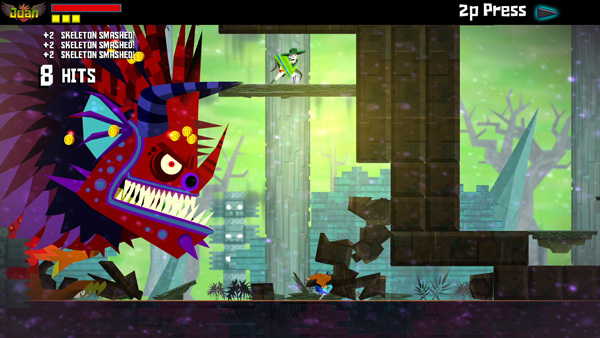 The day has finally arrived! The video game industry is graced by a Metroidvania style 2D platformer and beat em’ up where a Mexican wrestler/farmer dukes it out with hordes of undead in order to save the El Presidente’s daughter who conveniently happens to be the one who he’s in love with. Oh, and he can also switch dimensions. That’s Guacamelee in a nutshell for you.

Players will be placed in the shoes of a Mexican named Juan Aguacate, who has the ability to between dimensions known as “The Living World” and “The Dead World”. The game is being developed Drinkbox Studios and will be available on PSN for both the PS3 and Vita through the PlayStation Pub Fund program.

We’ve witnessed flocks of Call of Duty imitators this generation as a result of publishers seeking out the big chests of green paper. It’s refreshing to see a developer  just go bonkers and bring us the game that has been conjured in their imaginative minds. The game truly stands out from the crowd as you can see from the trailer below.

Gucamelee! will hit PSN on April 9th in North America and on the 10th in Europe, and will set you back $14.99. It does support cross-buy which means that purchasing the game for either the PS3 or Vita will fetch you a version of the other.