Guitar Hero: Warriors of Rock (WoR) is the latest installment in the popular franchise. It is the last game to be developed by RedOctane/Neversoft prior to their dissolution by Activision following poor sales. Future Guitar Hero games will be developed by Vicarious Visions (who were also responsible for porting Warriors of Rock to the Nintendo Wii). For a series which has been around for five years and spans two console generations (originating in the PS2’s hey-day back in 2005), a revamped approach was needed, and by returning to the games’ roots this was accomplished. Experienced players will find themselves better catered-for following such newbie-fluff as “Band Hero.” 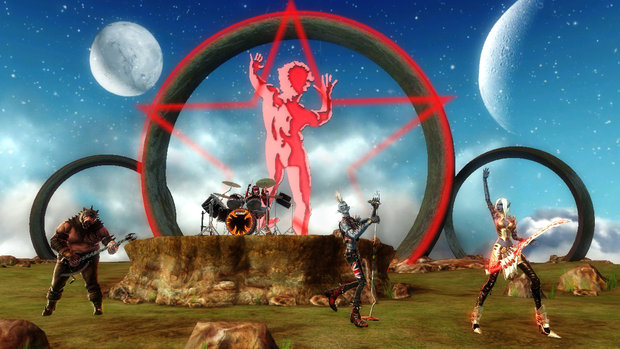 The arena’s are bigger and better than ever before!

The storyline is as follows: The Rockstar has been imprisoned by the Beast, and his Legendary Guitar is missing. So it is up to 6 characters from previous Guitar Hero games as well as 2 new ones to reclaim the guitar, free the Rockstar, and ultimately kill the Beast. The only slight niggle I found, is that the storyline seems a little “cartoony” at times. But then Guitar Hero has never been a serious, story-heavy franchise. We just want to rock! *Metallllllllllllllllll*

Each character has a specific power move – similar to the power-up’s in Versus Battles in previous games, such as Johnny Napalm’s minimum 2x multiplier, and Echo Tesla can generate Star Power for every 10-note streak. These moves are used to gain Power Stars that count toward that character’s transformation. Once enough stars are earned in a chapter, that character will transform into their Warrior form and their power will be upgraded. Then an encore will be played to complete the transformation. Once the first four characters have been transformed, it’s onwards to what is probably the best venue in the Guitar Hero series, Rush’s 2112 venue. Here you play through all 7 parts of Rush’s epic rock anthem “2112” in a row with all four characters’ powers combined and in several different locations that correspond to the story of the song, with the members of Rush providing narration in between each part. Once all 7 parts are completed, the Legendary Guitar is now yours, and it is now time to recruit the other warriors. You also get the right to play 2112 in Quickplay+. 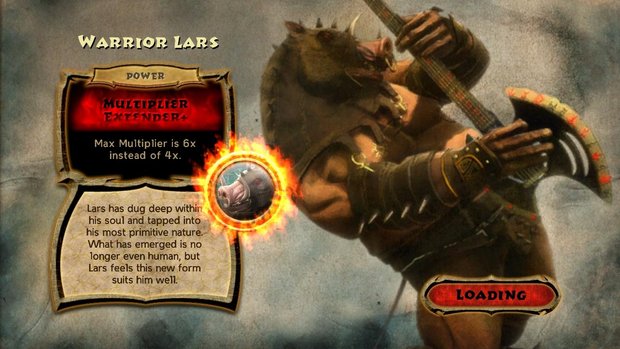 Each character’s ‘Warrior’ incarnation presents a different side of them…

Once all 8 warriors have been transformed, it is time for the final battle with the Beast. It’s a three-song set, and you will be playing the three Megadeth songs in the game. The warriors are split up into 2 bands of four members, each band taking one of the first two songs. The first band will take the first song, which is “Holy Wars…The Punishment Due,” and the second band will take the second song, which is “This Day We Fight!” In each song, all the powers of the band members are combined, and it is up to you to score 20 power stars to charge up the Legendary Guitar and deliver a crushing blow to the Beast. When you score 20 stars on both songs (for a total of 40), the Rockstar will awaken and he will take over the final segment of the battle, combining all 8 powers at once on the brand-new Megadeth song recorded specifically for the game, “Sudden Death.” Afterwards, the beast will die and you are awarded with what is probably the cheesiest credit sequence in the series. Another very minor drawback of the Quest Mode is you don’t even get to play a song during the credits.

However, you do get a reward for killing the Beast. First of all, you unlock “Sudden Death” for play in Quickplay+, and you will also unlock the Rockstar setlist, which contains some of the single hardest songs in the game, and a few of the hardest songs in the Guitar Hero series, but more on that later. In addition, you will unlock Domination Mode, in which you go back and play each character’s chapters again with all 8 powers combined and try to score the maximum 40 stars on each song. Extra rewards will be unlocked for dominating a character’s chapter, as well as Achievements. That’s it for Quest Mode, now it’s on to the heart of the action in Quickplay+. Like in Guitar Hero 5, you can play with any combination of band members, whether it be 2 guitars and 2 drums, or 1 guitar, 2 basses, and 1 singer, or your normal standard band with a guitar, bass, drums, and vocals. 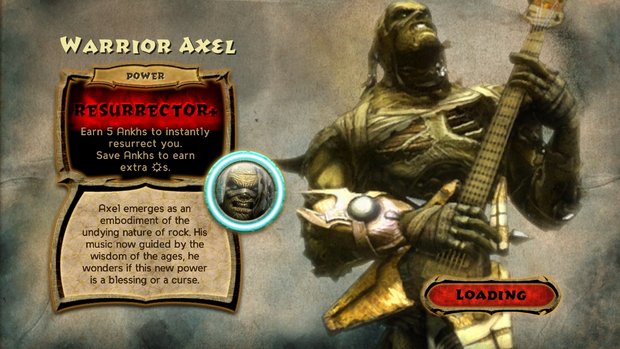 …as well as paying tribute to rock legends 😉

What puts the Plus in Quickplay+ is the added features. Each song has several challenges attached to it for each instrument, much like in GH5‘s career mode. Some examples include up-strumming an entire song on bass or hitting as many notes in a guitar solo as you can, or simply hitting as many notes in a row as you can. One challenge that is common for all songs on all instruments is the high score challenge, where you just go for as high a score as you can possibly get. You can get up to 3 stars per challenge (1 star for completing a challenge at Gold level, 2 stars for Platinum, and 3 stars for Diamond), and there are 12 challenges for each song (except for songs with missing parts), so you can get up to 42 stars in one song (3 stars x 12 challenges + 5 stars for a high score + 1 star for a Full Combo on any instrument). Not only do the on-disc songs have challenges attached to them, but so do all previous Downloadable Content and imports.

Each song also has a “Power Challenge” attached to it, where you combine two of the powers from Quest Mode and score as many stars as you can. I don’t think there is a limit to how many stars you can earn here (I’ve gotten as many as 21 on one song). These powers have been compared to the Perk system in the Call of Duty: Modern Warfare games. Another parallel to Modern Warfare is the new experience system implemented into Quickplay+. Every 10 stars you earn increases your level and unlocks new stuff like instruments for the Character Creator, new venues, new photo galleries, and others. Like in Modern Warfare, the higher you level up, the more stars you need to progress. After level 20, you will need 20 stars to move to the next level instead of 10. All in all, these new additions add a whole new level of gameplay to the game, and I rather enjoyed them. 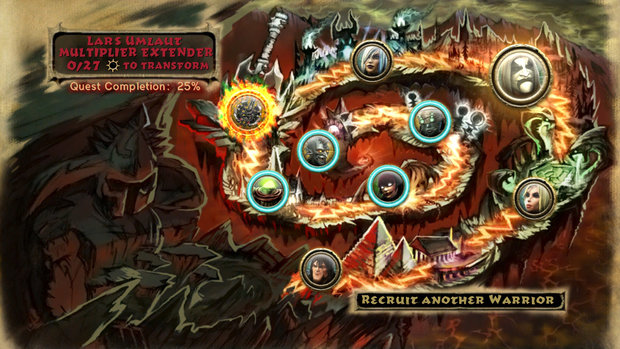 A cheesy plot, perhaps. But if Brütal Legend taught us anything it’s that Cheese and Awesome go hand-in-hand!

As in Guitar Hero 5, up to four people can play cooperatively online with any band configuration, including duplicate instruments. But that’s only the beginning. Improvements have also been made to the competitive play modes. For example, in Pro Face-Off mode, after certain “checkpoints” in a song, it will show you how far apart you are from the next-ranked player. This is an awesome addition, so you don’t have to look over to your opponent’s side to see how far ahead or behind you are. The additional “Rockfest” modes from Guitar Hero 5 are back in this game as well, including Streakers, Elimination, Perfectionist, Do Or Die, and Momentum. Each mode can be played free-for-all or in teams. There is also a new game called Momentum+, which is described simply as “a harder version of Momentum.” Basically, this version lets you attack your opponent by sending him back to Beginner difficulty with Star Power.

Probably the most important aspect of any music/rhythm game is the actual music that’s featured in the game. In the case of Guitar Hero, you would expect a list of songs that rock on guitar, and this game’s setlist delivers on that in spades! While Guitar Hero 5 kind of fell flat in the setlist department, Warriors of Rock returns the series to its roots with one of the most rock-oriented setlists in a full sequel since Guitar Hero 3, including songs from artists like Slayer, Megadeth, Anthrax, Dragonforce, Steve Vai, Children of Bodom, and one of my favorite guitar shredders of all time, John 5. There are a few duds (Nickelback, Fall Out Boy), but what music game doesn’t have those? It’s impossible to please everyone, but overall the positives outweigh the negatives. 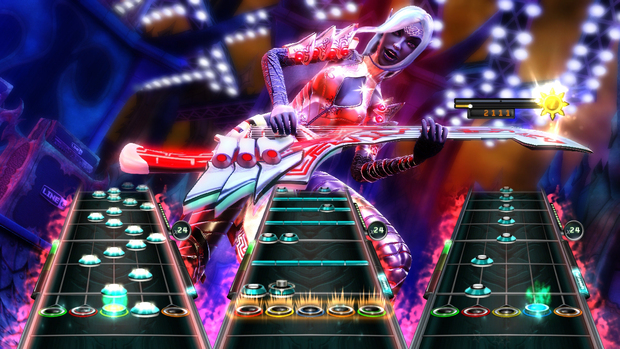 Multiplayer has been cleaned up, and is a crisper and better experience for it.

In the Quest Mode, each character’s chapter contains songs under a specific genre. For example, Johnny Napalm’s setlist is punk-rock oriented, Judy Nails is alternative, Axel Steel is metal, etc. So the Quest Mode is sorted more by genre than by difficulty, but the songs in each set do get harder as you go down the list. Another thing to note about this game’s setlist is that it is HARD, probably the hardest setlist since GH3. So for that reason, this game may not be the best for beginners to start, but it is definitely a welcome challenge for hardcore Guitar Hero veterans. In Quickplay+, you can see the intensity ratings for each song, and you will be surprised to see our first tier-10 songs for both guitar and bass.

Party Play is back, but it doesn’t jump right into it like it did in GH5. Another very minor drawback. But they did improve it by showing a player the intensity rating for the song on their instrument when they jump in. Another feature added is Downloadable Content recommendations where the game tracks which songs you play most often and recommends DLC to match. You can also keep track of all your unlockables through the Rewards Tracker, which also shows what you need to unlock the next item. This is a good way to keep track of your progress, and I rather like it. One more thing to note is that your stats from Guitar Hero 5 and Band Hero, including average multiplier, longest note streak, and even scores for DLC and imports carry over into Warriors of Rock. In your rock record, “Lifetime” stats include values from all 3 games. Another new addition is the option to share scores and achievements on Facebook and Twitter, which can be good or bad depending on how you use those services. If you use them mostly for connecting with other Guitar Hero players, this can be a good thing. 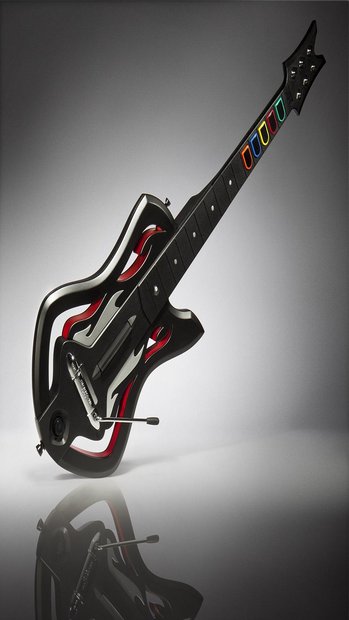 The new direction for the franchise is completed with an updated controller (with customisable inserts, no less)!

If you’ve found recent Guitar Hero games to be lacking a certain ‘Je ne sais quoi’, or if you just want the opportunity to play more complex and more songs, look no further. Warriors of Rock will fill your appetite for epic rock and more. Definitely one to consider buying!

Great challenge for hardcore veterans, Awesome songs to rock out to, including Rush's 2112! Extensive Quickplay gameplay and features, Improved Pro Face-Off, Share your achievements with the world!

Final Verdict:
SUPERB
Possibly the BEST Guitar Hero to date.
A copy of this game was provided by Developer/Publisher/Distributor/PR Agency for review purposes. Click here to know more about our Reviews Policy.