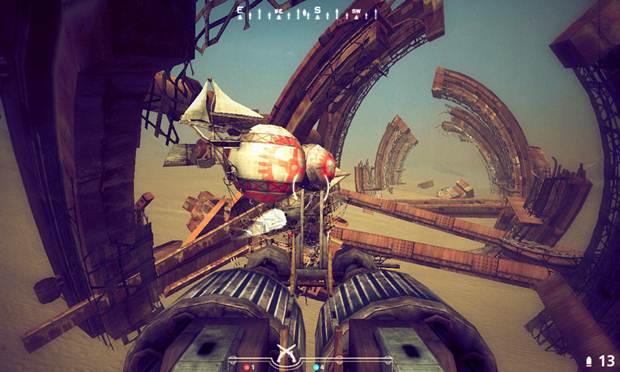 GamingBolt was able to get in touch with Howard Tsao, CEO of Muse Games. They are currently developing Guns of Icarus Online for the PlayStation 4. The game has already been released on the PC with the PS4 version expected to be released in 2014.

We asked Howard about their decision to go from a turret defense format to a multiplayer FPS, to which he replied:

“We wanted to take the thrilling moments of using the big mounted turret guns, which were always fleeting in games, and make it a core of the game. We wanted to create the thrill of blowing stuff up with mammoth artillery.  To complement the offensive element, we referenced time management games to create a frantic and intense repair-centered defensive component.  To make teamwork really work, we decided to place players as a crew in an enclosed space.

The crew triumphs and perishes together as a single entity.  The crew,being a single unit in combat, needs to coordinate which guns to man and what needs repairs with all hell breaking loose on deck as other ships are torn apart.  We’ve planned the the core combat mechanics and the focus on teamwork from the beginning of the game but it has taken us quite a while and numerous iterations to realize them and get the game to this point.”

With the influx of free to play games over the last few years, one can’t help but wonder how Guns of Icarus Online will compare to them that will be releasing on the PS4.

“We aim for the design of the game and the core combat experience to be inherently balanced, so there is no pay to win in Guns of Icarus Online. And while there is an in game store for cosmetics, the game is not a free to play. I think, ultimately, it’ll come down to whether or not someone, or a group of friends, is going to enjoy crewing an airship in the skies together, performing individual roles, and working together as a team in the Steampunk world that we create. In other words, I think the merit of the gameplay and artistic experience itself will be the primary point of differentiation for us.”