Guns of Icarus Online Interview: All You Need To Know About The PS4 Version

Howard Tsao, CEO of Muse Games talks about how the PS4 version of Guns of Icarus Online is shaping up.

As far as the games are concerned, it seems that Sony have taken the correct steps with the PlayStation 4. They have got a number of AAA exclusives under development and a ton of indie games for the casual audience. But one area they have been extremely aggressive is the ‘Free to Play’ model. Guns of Icarus Online will be one such title that will be joining the PlayStation 4’s strong line up of games.

We spoke to  Howard Tsao, CEO of Muse Games, the developers behind Guns of Icarus Online and got a chance to ask about the PS4 version of the game, the technology powering the title and how the next generation version stacks up against the one on PC.

Ravi Sinha: Guns of Icarus Online is a multiplayer online title that focuses on airship combat with each player taking on a unique role. But what motivated the decision to go from a turret defense format to a multiplayer FPS?

Howard Tsao: We wanted to take the thrilling moments of using the big mounted turret guns, which were always fleeting in games, and make it a core of the game. We wanted to create the thrill of blowing stuff up with mammoth artillery. To complement the offensive element, we referenced time management games to create a frantic and intense repair-centered defensive component. To make teamwork really work, we decided to place players as a crew in an enclosed space.

The crew triumphs and perishes together as a single entity. The crew,being a single unit in combat, needs to coordinate which guns to man and what needs repairs with all hell breaking loose on deck as other ships are torn apart. We’ve planned the the core combat mechanics and the focus on teamwork from the beginning of the gamebut it has taken us quite a while and numerous iterations to realize them and get the game to this point. 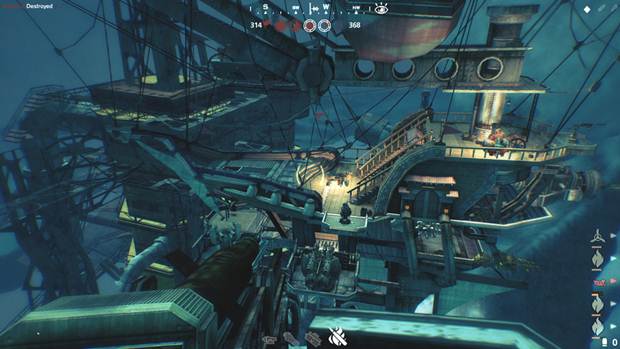 "We have a great relationship working with Sony thus far, and we’ll be an exclusive title on PS4. I think the decision for us is as much about the people as it is about anything specifically. PS4 seems to have better integration with Steam’s account system, and it allows us to host our own backend, so that helps."

Ravi Sinha: Guns of Icarus Online has been released for almost a year and will now be heading to the PlayStation 4. How will it differ from the PC version and what improvements will be made in terms of gameplay features?

Howard Tsao: By the time we are ready for PS4 next year, we should be well on our way with the co-op and Adventure Mode DLCs. Because we use Unity3D, new updates and contents we create we will aim to make all of it available to PS4 players. We aim to have desktop and PS4 sky pirates play together and make sure things are as balanced as possible. So what we do from now on will have to take into account console players.

However, we may be able to do something special for PS4 players as well like taking advantage of their unique controller. As for cross-platform play, there are a few challenges we’ll need to overcome, such as cross-platform in match voice communications, so we’ll be looking to solve these puzzles to make the in game experience as great as possible for both PS4 and PC players.

Rashid Sayed: Guns of Icarus Online is not coming to the Xbox One. Is there any specific reason why it won’t be available on that platform?

Howard Tsao: We have a great relationship working with Sony thus far, and we’ll be an exclusive title on PS4. I think the decision for us is as much about the people as it is about anything specifically. PS4 seems to have better integration with Steam’s account system, and it allows us to host our own backend, so that helps.

Ravi Sinha: Furthermore do you think the ID@Xbox Program will be successful enough to get more indie developers under Microsoft’s banner?

Howard Tsao: I think if there are great opportunities for indie developers, we will explore them. And really the merit of the program and the word of mouth from developers will determine and shape the level of support among developers. 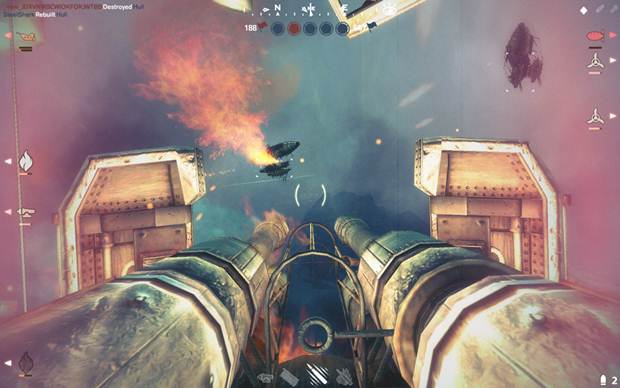 "With the game in general, we are continuing to update and add new content.By the time we release to PS4, we’ll definitely have a lot more contentfor PS4 players."

Ravi Sinha: We’ve seen many comments about the “developer friendly nature” of the PS4. How many months did it took you guys to port over the game to the PS4?

HT: We are just getting started, but so far everything know about PS4 and everyone we’ve worked with at Sony made us really excited about the platform.

Ravi Sinha: Will we see any new content coming to the PS4 version, perhaps in the form of new classes, ships and tools?

Ravi Sinha: How will Guns of Icarus Online take advantage of the PS4’s features, including Cloud computing and DualShock 4’s touch pad?

Howard Tsao: We’re really excited to work with the PS4 hardware. To be able to develop for one set of specs is a nice change. We’re excited to play with DualShock4 as well. Specifically how we will take advantage of DualShock4, I’m not sure yet but it’ll be a lot of fun for us to figure that out. 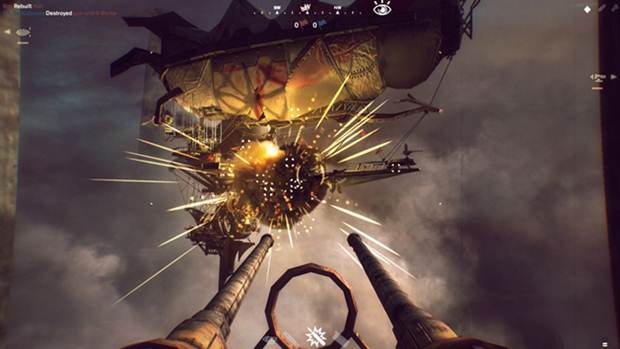 Rashid Sayed: 1080p resolution and sixty frames per second is one of the most wanted feature from next generation of gaming. Are you guys targeting the same for the PS4?

Howard Tsao: Yeah definitely, with PS4’s specs, the doors are open for a lot of pretty things. We’ll obviously have to do a lot of benchmarking work, but we are definitely excited about PS4’s specs.

Rashid Sayed: Unlike the PC, the developer is guaranteed to receive 8GB of GDDR5 RAM with every PS4. How is that extra fast memory helping you guys develop the game on the PS4? Does it remove the memory hog issues and frees up space to do more stuff?

Howard Tsao: We can benchmark for much higher graphical settings and to ensure the players enjoy as nice of a graphical experience as we can deliver. It’s nice to be able to dedicate to supporting and optimizing high-end specs for a change.

Howard Tsao: I think with free to play multiplayer titles it’s as much of a design choice as it is a revenue model choice. While there are more and more free to play titles, I think pay to download and free to play titles can co-exist. Ultimately, the quality, creativity, and fun factor of an individual title will decide on its success. 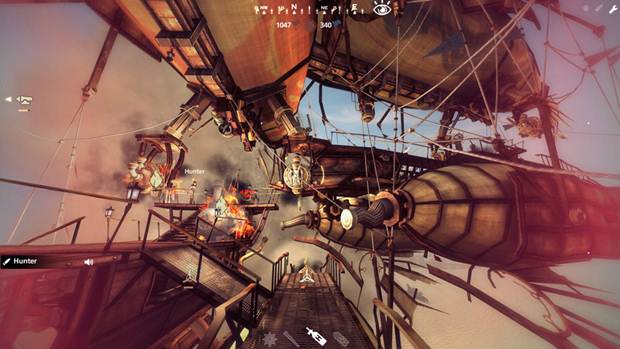 "With PS4, we will still be hosting our own servers, and PSN accounts integrate with Steam accounts, so there are already advantages in going with PS4 with respect to cross-platform play."

Ravi Sinha: How will Guns of Icarus Online compare to other free to play titles that will be releasing with the PS4?

Howard Tsao: We aim for the design of the game and the core combat experience to be inherently balanced, so there is no pay to win in Guns of Icarus Online. And while there is an in game store for cosmetics, the game is not a free to play. I think, ultimately, it’ll come down to whether or not someone, or a group of friends, is going to enjoy crewing an airship in the skies together, performing individual roles, and working together as a team in the Steampunk world that we create. In other words, I think the merit of the gameplay and artistic experience itself will be the primary point of differentiation for us.

Ravi Sinha: Will Guns of Icarus Online support cross play between the PS4 and PC versions? If not, how will you be looking to attract PC gamers to make the jump to the PS4 version?

Howard Tsao: With PS4, we will still be hosting our own servers, and PSN accounts integrate with Steam accounts, so there are already advantages in going with PS4 with respect to cross-platform play. We’ll be exploring cross-platform solutions for in game voice communications, so the idea is to facilitate PC and PS4 players to play together as much as we possibly can.

Rashid Sayed: From a developer perspective, the Xbox One comes in with DDR3 RAM and a GPU that is reportedly slower than the PS4. Some developers have even claimed that the PS4’s GPU is 40% more powerful than the Xbox One’s. What is your take on the situation and how does this affect your [future] decision on bringing games to the Xbox One?

Howard Tsao: Right now we are an exclusive PS4 title, and Sony’s been awesome to work with. If the opportunity arises with Xbox One, we’ll explore it. We haven’t tested with the Xbox One, so I can’t say for sure, but we made the decision to go with PS4 as much because of the people we get to work with as anything.

Rashid Sayed: One thing we don’t know about the PS4 version is the release date. Is it finalized yet?

Howard Tsao: Not yet! There are a number of things we are doing for the first time, so we are still trying to figure things out as we go.

Thank you for your time!