Try going online with a pirated copy of Halo 4 (or don't, actually).

Get your hands on an early copy of Halo 4? Feeling real good about yourself? Well, Microsoft Games Studio is here to spoil your day, as it’s becoming heavily apparent that they’re banning early Halo 4 players on XBox Live.

For those who don’t know, Halo 4 was recently leaked over the weekend for XBox 360. Gameplay videos and walkthroughs shortly followed. However, according to Reddit users, early birds are having their accounts permanently suspended for “prerelease title play”. Maybe it’s not permanent? Well, judging by the statement, “Your XBox Live privileges will not be reinstated”, we don’t think so.

Check out the image below, which is a screencap of the email users have been getting for playing Halo 4 early. Though the question has to be asked: Who was dumb enough to go online with a pirated copy of the game, not expecting to get caught so soon? Regardless, karma, all’s well that ends well and so on. 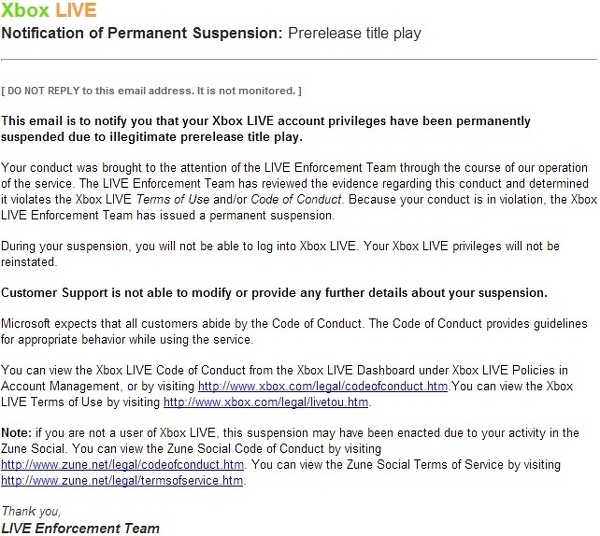