It looks like another game has been released way before it was meant to be. The CV of a 343 Industries (a Microsoft studio) employee seems to indicate that Halo 4 is well under development.

A new update on Paul Ehreth’s Linkedin profile says that ever since July 2010, he has been busy  ‘designing new levels and missions for the next Halo project’ at 343 Industries. 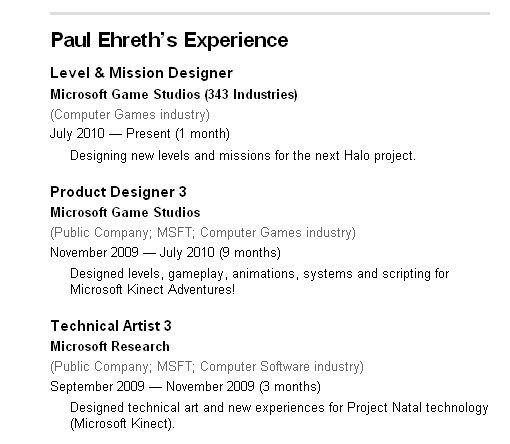 This is further confirmed by the fact that several ads of job offers came up on Microsoft’s 343 Industries website some days ago, advertising for help on a new Halo project. An ad read: “343 Industries, Microsoft’s internal Halo studio, is looking for an experienced Missions Designer who can design and build missions for our next big project.”

Even Bungie’s boss Brian Jerrard confirmed that he had considered making a Halo 4 before he finally decided on Halo: Reach. He said, “Even before the idea to build a game based around Reach came about, a lot of other concepts were explored, up to and including a proper ‘Halo 4,’ where Master Chief was going to wake up from cryo-sleep and we were going to tell that story.”

Ehreth was formerly with Sony Online Entertainment, but joined forces with Microsoft in June 2009.