343 Industries surprised Halo fans with an unannounced release for their latest addition to The Master Chief Collection with the heroic Spartan’s first adventure, Combat Evolved.

The onset to John-117’s battle against the opposing Covenant and parasitic Flood is brought upon the chaos of a mysterious ring-shaped structure that is believed to be used as a weapon. Sounds familiar? That’s because Bungie took inspiration from a Larry Niven novel entitled “Ringworld” to establish their universe and battleground for the player. "While the music largely stays true to the original, there are a few issues that plague the PC version."

The port’s gameplay remains faithful to the original Xbox release with hardly any noticeable alterations to the mechanics and style Bungie had created almost two decades ago. The visual toggle feature, where you can switch from the classic Halo graphics to the updated Anniversary one will be appreciated by both, the nostalgic hungry fans and newcomers to the series. As one might say, “it’s a blast from the past,” and a welcome re-visitation for players who played Combat Evolved with their mates to duel it out in Battle Creek and Chill Out all those years ago.

Some of its age is starting to show, however. As the progression of the video games industry continues to evolve, some players might be turned away from the devolution of the gameplay compared to the addictive action that Reach provided a few months ago. Still, 343’s plan to release each individual title from the prequel that is Reach to the Forerunner encounter in Halo 4 is an effective tactic to keep the community of Halo fans invested. Combat Evolved is an essential title for The Collection, and it only adds more to what we can expect as the rest of the series is released.

The music in the PC version is as fantastic as ever. Featuring composition from Martin O’Donnell and Michael Salvatori for the campaign and menus, every percussion loop to choirs, as well as the untouched vocal work of the actors and alien sound effects in Halo still sounds exceptional even after so many years.

While the music largely stays true to the original, there are a few issues that plague the PC version. There’s a certain delay in character death’s audio that occur more so in the multiplayer than the campaign due to which a fallen player’s audio would take a second before it’s registered resulting into a minor but noticeable annoyance. The assault rifle continues to be problematic with its odd firing sound, while the plasma pistol’s charge sound effect would play out even after a tiny round is fired, dangerously increasing the audio to an ear-hurting effect. It’s only temporary, but is pretty annoying nonetheless.

Halo: Combat Evolved revolutionized single-player experiences as well as multiplayer battlegrounds, and its nature remains nearly untarnished in this PC port, even in terms of the issues the original had. Newcomers will be frustrated from the over-powered M6D pistol, while returning fans will revere in the classic map designs, competitiveness and craziness of Slayer.

Matchmaking for the most part was fine but sometimes I experienced a few glitches when backing out of multiplayer where the screen would freeze. I also experienced a few noticeable delays while matchmaking. While I was still able to connect to a good number of matches, I don’t recall having this much delay when Reach was released. 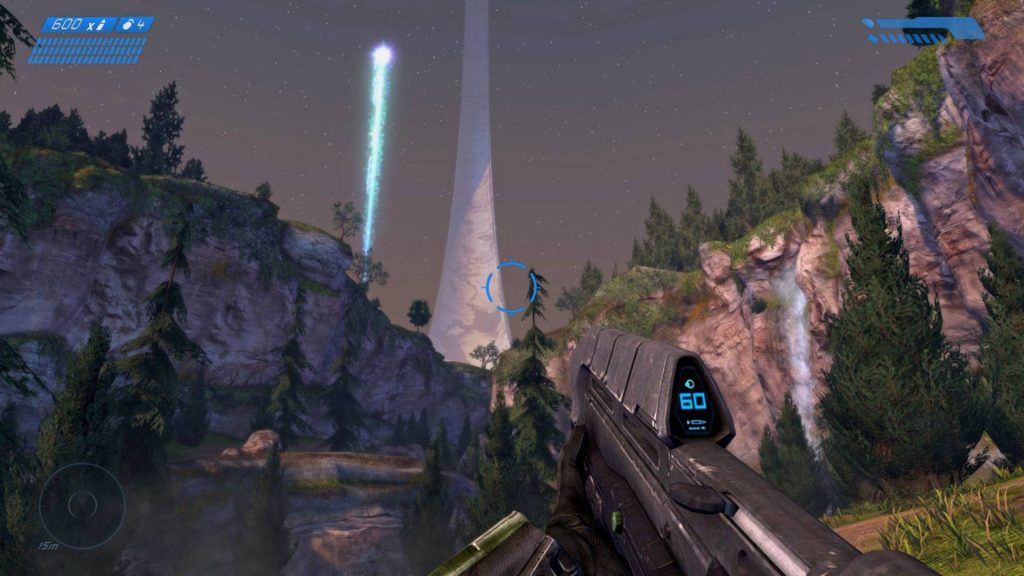 "Since this is the 2011 Halo: Combat Evolved Anniversary version being ported to the PC, it’s fair to say that the multiplayer has shown its age by this point, with small errors that can either frustrate one player while ungracefully awarding the other."

The PC port also adds a 3D model viewer to the Spartan customization screen along with text chat, ultrawide resolution support and the option to switch between the classic and Anniversary audios for multiplayer. Furthermore, the PC port of Combat Evolved supports 4K resolution at 60 frames per second along with adjustable field-of-view, which will be appreciated by fans across the board.

Since this is the 2011 Halo: Combat Evolved Anniversary version being ported to the PC, it’s fair to say that the multiplayer has shown its age by this point, with small errors that can either frustrate one player while ungracefully awarding the other. In the end, Halo: Combat Evolved Anniversary is all about pure nostalgia, and that might be an issue to those who are new to the franchise. Die-hard Halo fans on the other hand, who have long waited for Master Chief’s return to PC, will surely have a great time with this classic.

Solid gameplay, music is still epic, visual switch from classic to Anniversary is a feature unlike any other.

Multiplayer has a few annoying issues, few errors in sounds effects, the game is starting to show its age.

343 Industries has done an admirable effort in porting Halo: Combat Evolved Anniversary onto the PC by maintaining everything from the epic campaign to the old-school matchmaking of the multiplayer component.

A copy of this game was provided by developer/publisher for review purposes. Click here to know more about our Reviews Policy.
Tagged With: 343 industries, halo: combat evolved, Microsoft, pc