Hearts of Iron IV Review – The Art of War Planning

Grand strategy doesn’t get any grander than this.

4X games, despite my enjoyment of them, will forever be a thorn in my gaming life. It’s not so much the scale or the options or the freedom – that’s what makes them awesome – but it’s the commitment in time. The amount of sheer learning required to re-adjust to each new title, to learn and attempt to conquer a brand new blank easel of strategy. You’re probably expecting me to tell you that Hearts of Iron 4 subverts that but this is a grand military strategy game. What’s more, it reinforces that commitment to learning and growing to an absurd degree. The good news? It rewards that learning to an amazing degree as well. 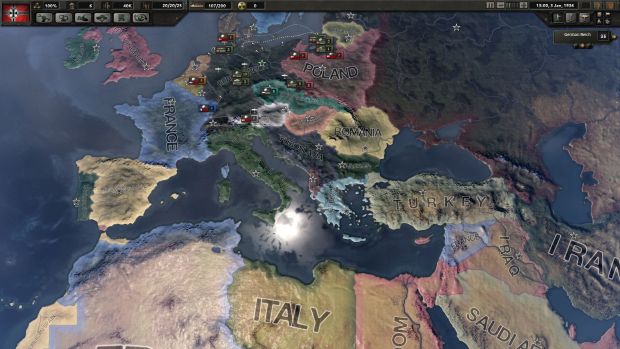 "What if you dedicate too much to research and not enough to the right composition of naval fleets? How will this affect your potency in sea battles?"

Hearts of Iron 4 doesn’t just take place during World War II. There are actually two unique scenarios for players to begin from: 1936 where the war is just getting started and thus any side is a viable option for building a base army; and 1939, where Germany is already pretty large and in charge and your job will be managing armies while also ensuring steady resource management. From here, players can choose their nation and modify the difficulty for changes in research time and political power gain. Seven major powers including the United States, Japan, France and whatnot are available to choose from but you can also opt for smaller nations.

It’s then down to managing resource lines, prioritizing the kinds of weapons and vehicles you want built, the soldiers to train, researching important discoveries and just deciding where your focus should lie. These decisions aren’t meant to be taken lightly – this isn’t a conflict where you can simply recover from a fatal plan. What if you dedicate too much to research and not enough to the right composition of naval fleets? How will this affect your potency in sea battles? How will your troops reach different conflicts across the globe? What will ultimately happen to your stake in the war?

Things are further flipped when you realize how much your national unity – which influences how strongly your country will fight to the death – can be affected and changed. Choose a few traits and you could recreate what the United States and Germany would have always done during the war. Modify that national focus and watch the pieces fall. 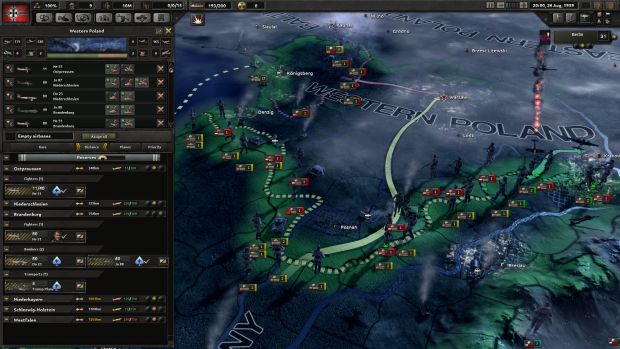 "Think of your units and resources like numbers on a piece of paper. The real task is in getting results and suffering as minimal losses as possible."

Create a United States that has no interest in assisting Europe while battling against Germany. Hitler may fall but other more stringent forces may arise as a result. The options are manifold in Hearts of Iron 4 and as such, whether you’re looking for a grand standing set of battles or proper war simulation, the two scenarios accomplish both tasks admirably.

None of this is easy, mind you. Hearts of Iron 4 will challenge you to take history into consideration for your battles, planning your advances and striking at the most opportune times. Weather, types of land, economic development, political stance, national unity, world tension (which affects some of the actions you can take) and three different map modes…it’s a lot to manage and can become overwhelming for even seasoned veterans. This leads to one of the bigger issues with Hearts of Iron 4. With so much to manage, the interface could’ve have felt way more intuitive and easy to navigate. That’s sadly not the case here. It’s not a jumbled mess so much as an immense library with the librarian out for lunch. You may eventually learn to navigate these massive vats of information and resource management but it’ll take a while before you’re deft at it. And even then it could be improved.

The lack of a proper tutorial only ensures that newbies will have to work that much harder to really grasp the tenets of war. Assigning troops and giving orders is tough enough, though the game’s AI will thankfully manage your armies at the battles themselves when need be. For example, naval ships will be gathered into fleets at the time of deployment and commanders can be assigned to the same, bringing their own skills to the forefront. You’re still responsible with organizing operations and deciding what your armies should be equipped with. It’s all on your shoulders and with so much war raging on across the world, it can be tough to manage it all. Also a note for the graphics hounds – this isn’t exactly something that will tax your systems when the battles get going. Think of your units and resources like numbers on a piece of paper. The real task is in getting results and suffering as minimal losses as possible. 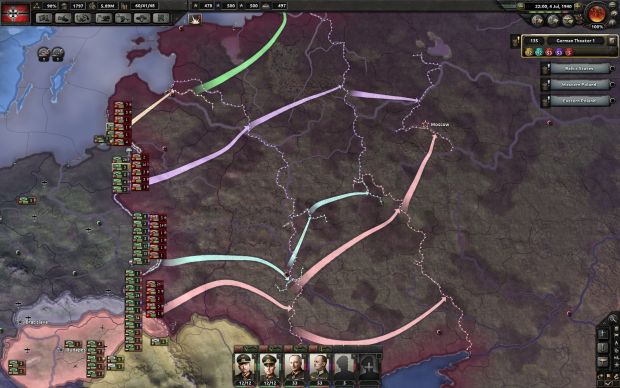 "If you’re seeking a grand strategy title that focuses more on war planning and execution, then Hearts of Iron 4 is definitely worth a look."

Hearts of Iron 4 is a rush though. Whether you’re carefully crafting a plan or just throwing your country into turmoil because you believe the United States is better served in invading neighbouring nations rather than interfering with Hitler’s plans, there’s plenty of havoc to be wrecked. World War II enthusiasts will love the historical accuracy even if fans of the franchise don’t quite appreciate some of the changes made to combat and provinces.

There’s so much to unpack here and so much to learn that you’ll spend quite a significant amount of time just getting your bearings. Once you’ve attained a solid base and made your fair share of rookie mistakes, Hearts of Iron 4 will really start to beat information into you till you can take no more of the build orders and menu screens and conflict. And I mean that in the best way possible.

If you’re seeking a grand strategy title that focuses more on war planning and execution, then Hearts of Iron 4 is definitely worth a look. It allows you to experience as little or as much of the war-mongering process as you’d like, giving your all to conquering this world while immersing yourself in it further. The drab interface, lack of tutorial and absence of any real assistance for all the micro-management is disheartening, to say the least, but this only slightly wears on the game’s fun factor. Just remember – war is a cruel, crazy, difficult mistress in Hearts of Iron 4 but it’s oh so worth it.

Requires lot of time investment. Tough for new players to get into, especially with lack of tutorials. Interface can be a little clunky at times. Managing so many different things without AI assistance is trying.

Hearts of Iron 4 is incredibly daunting for your average strategy player but for those who want war on its grandest scale yet - from the preliminary stages to the finale - it's worth playing.

A copy of this game was provided by developer/publisher for review purposes. Click here to know more about our Reviews Policy.
Tagged With: Hearts of Iron 4, Paradox Interactive, pc, Steam