Ninja Theory's action adventure is unsettling but emotionally involving despite some straightforward gameplay.

Ninja Theory’s Hellblade: Senua’s Sacrifice is a remarkable beast. It’s an experience through the mind of a young woman tormented by events that would render most people helpless (which is also something she’s trying to deal with). It’s a reminder that psychosis isn’t simply meant to be cursed or shamed, even by the person suffering from it. It’s a journey through a horrifying wasteland of the mind and the underworld, the demons of both mixing together and creating an all too real picture of mental and spiritual torment. However, what makes Hellblade so remarkable is its razor-sharp focus on story-telling and the unrelenting depiction of Senua’s torments, memories and desires. 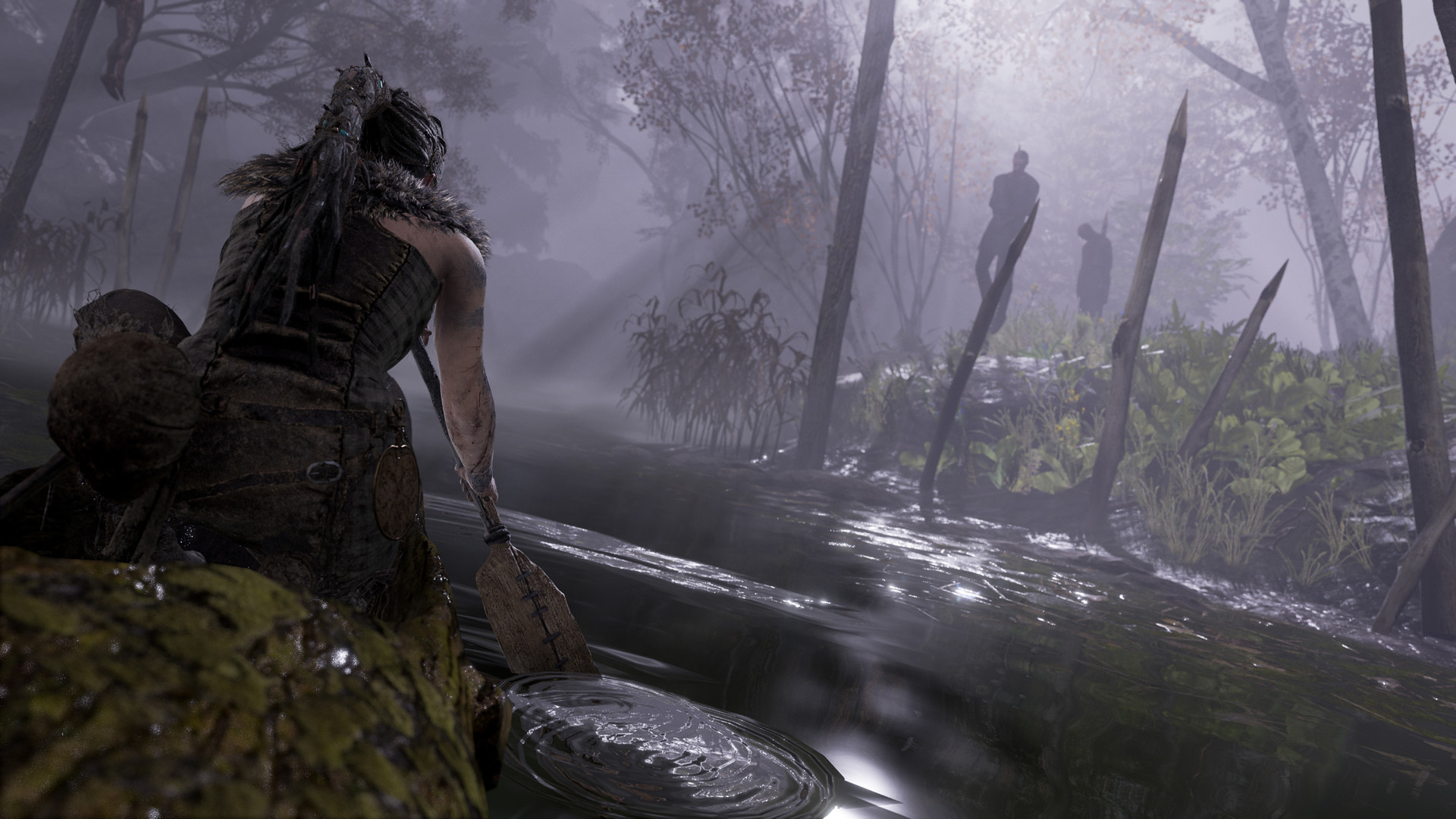 "Combined with the stellar animation, magnificent texture work and lighting and seamless audio mixing, Hellblade: Senua’s Sacrifice is an experience that will wear on you."

Let’s talk about those voices, which highlights the audio brilliance of Senua’s Sacrifice. Senua has a number of voices in her head and they’re all different. There’s the tired elderly voice that’s narrating events while offering her own advice in her own way. Some voices are curious about whether Senua even has a chance. Others soundly mock her and laugh at her. There’s at least one voice that encourages her and believes she can actually win. Another voice is Druth, who met Senua at one point and guides her through a number of the initial trials. Then there’s the “shadow” that’s seemingly following Senua around, berating her, taunting her and bringing her down.

The player begins the game as one of Senua’s voices, though we don’t speak very much at all, joining her en route to Helheim as she attempts to resurrect her fallen lover. “Resurrect” is probably the wrong word – Senua’s village had been slaughtered and the “shadow” told her to take her lover’s head to Helheim to bring his soul back. That’s the long and short of Hellblade’s story as Senua deals with all manner of beings, hallucinations and terrible memories en route to Hela, the mistress of the underworld. The entire experience is gorgeously captured, from the rippling water and blinding light as Senua travels up river to every minute expression on her face as she wrestles with the voices while attempting to stay alive in combat.

And yes, the voices do speak out to you in combat. They become afraid, warn Senua of danger, and will often tell her when to dodge or strike. They’ll warn her when she’s close to dying, which is a neat way of telling you to hang back and avoid taking damage. Little nuances include calling out when an opponent will avoid your attacks and counter you. Combined with the stellar animation, magnificent texture work and lighting and seamless audio mixing, Hellblade: Senua’s Sacrifice is an experience that will wear on you. 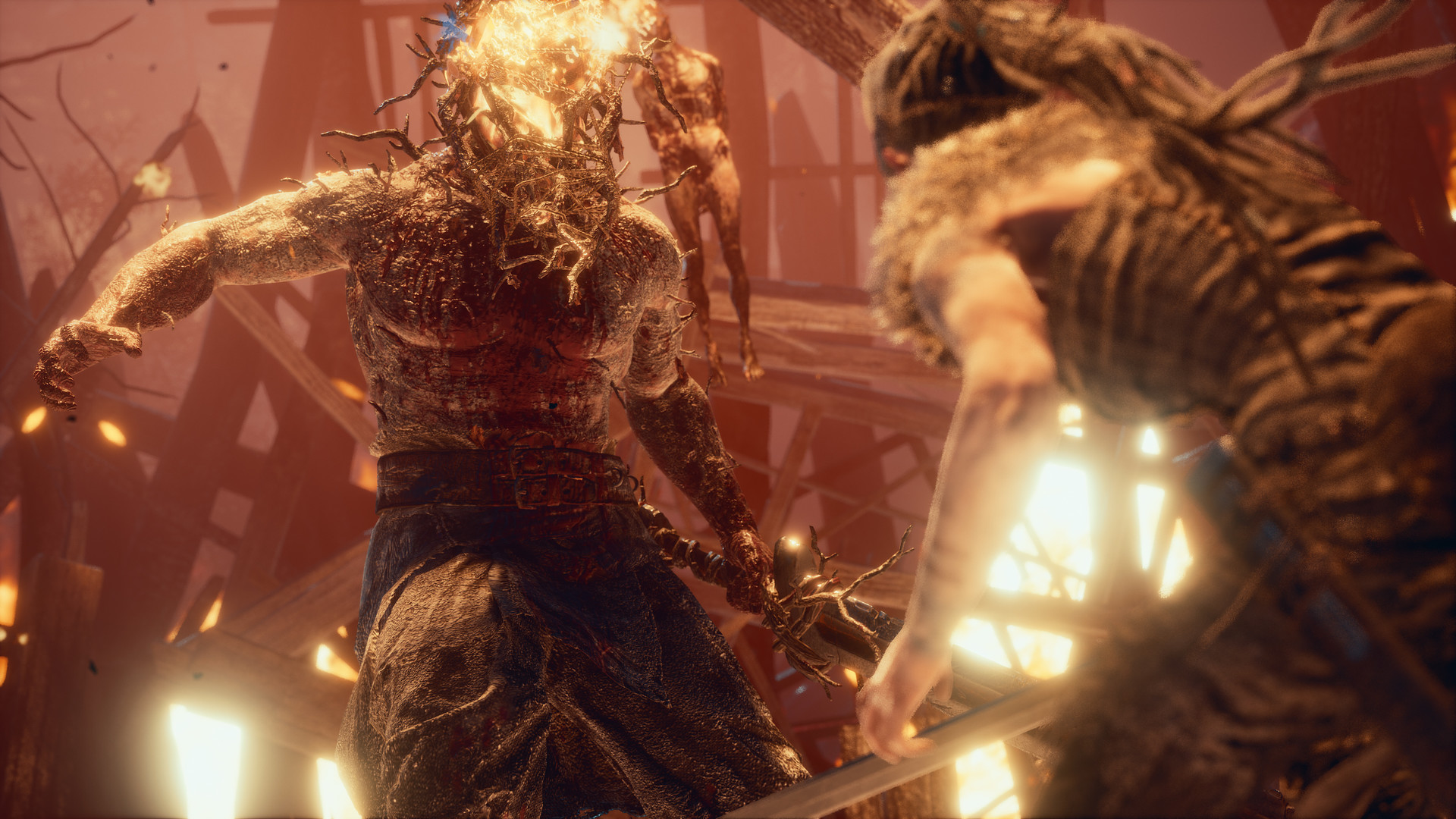 "There’s a message here about Senua being a normal girl who does want to be happy, even as she believes herself to be the cause of everyone’s suffering."

Whether that’s good for you or not in the long term is debatable but it makes for a unique, unparalleled story-telling experience. Much of the credit must be given to Melina Juergens for her depiction of Senua, showcasing everything from the sheer, wrenching frustration and anger she feels to those brief moments of joy upon remembering her love Dillion. Similarly, her moments of fright when stumbling around in the dark or wading through the murky swamp are simply uncanny. There’s a message here about Senua being a normal girl who does want to be happy, even as she believes herself to be the cause of everyone’s suffering. It’s a message that’s thankfully presented in good taste without any patronizing.

The basic gameplay elements of Hellblade: Senua’s Sacrifice are pretty straightforward. The game doesn’t outright tell you what to do, throwing you into the violent waves of Helheim and expecting you to sink or swim. Senua navigates the world, encounters gates and memorizes runes before envisioning them in the environment and progressing forward. These are essentially perspective puzzles and could require orienting yourself at a certain spot or heading to higher ground and looking around. Don’t worry – Senua’s POV starts lighting up with dozens of flashes of the rune in question that only get stronger as you get closer to the solution. Using your “focus” on environments will thus reveal the runes hidden within.

And while it may seem easy enough in the beginning, the game finds other ways to throw its perspective puzzles at you. One such level sees you passing through gates to unveil previously unseen portions of the environment, materializing and dematerializing objects accordingly. Puzzles are interesting, fit the overall nature of the game and have plenty of clever wrinkles the deeper you go. However, they also aren’t too complicated and there’s a fair bit of sticking to one single path when exploring environments. While making for harrowing moments like rushing through a burning village to reach a fire gate, there’s not much room for experimentation. 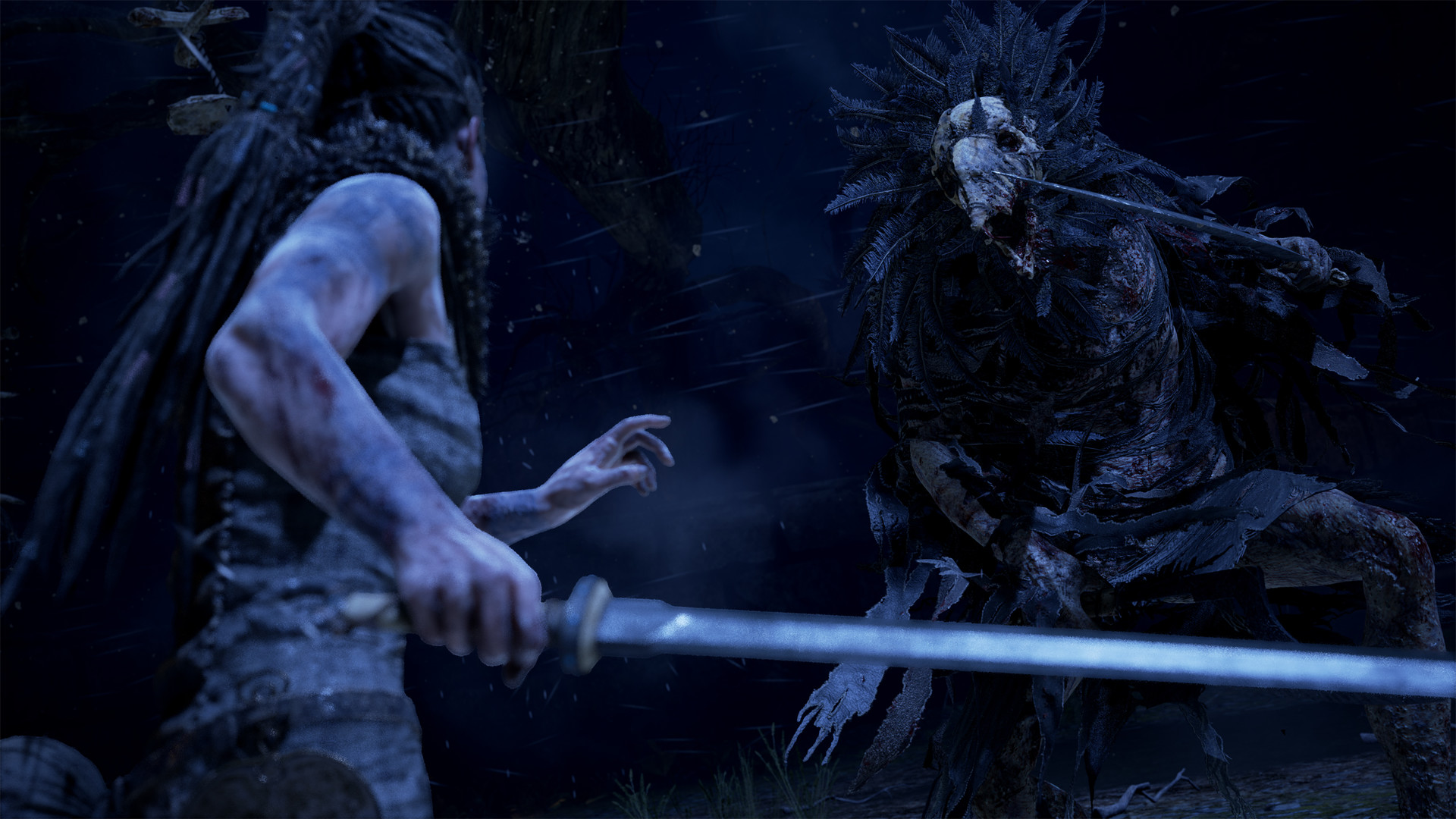 "Fights feel cinematic but they’re also tight and well executed despite being constrained to small arenas (for the most part)."

The same rings true for the combat. Focused primarily on sword-play, Senua has two basic attacks – quick and strong – that can be mashed continuously for combos. A melee attack button is also available for stunning enemies with shoulder blocks, thrust kicks and my favourite, the flying knee. The last one is executable by sprinting while meleeing and it’s also possible to hit lunging stabs and overhead swinging strikes in the same way.

Enemies are fairly typical, relying on swords and maces with the odd few using maces and shields. It does become challenging when facing off against multiple enemy types like the dual wielding berserker or the giant monstrosity with an axe. Senua’s ability to dodge is very forgiving, getting her out of most sticky situations, but I couldn’t help wishing for a manual targeting system. Once your vision is fixed on an enemy, it won’t shift unless you strike another foe.

Aside from Senua’s focus also being able to expose shadowy enemies immune to damage and slowing down time to execute a myriad of slashes on a foe, that’s all there really is to the action. Make no mistake though – it’s fast, responsive, brutal and tons of fun. The sheer visceral nature of the combat is also highlighted when Senua is knocked down and struggling to get up each time. Fights feel cinematic but they’re also tight and well executed despite being constrained to small arenas (for the most part). The boss battles are also exceptionally well done, making use of the focus mechanics, dodging and pattern memorization without overwhelming you with all the details. 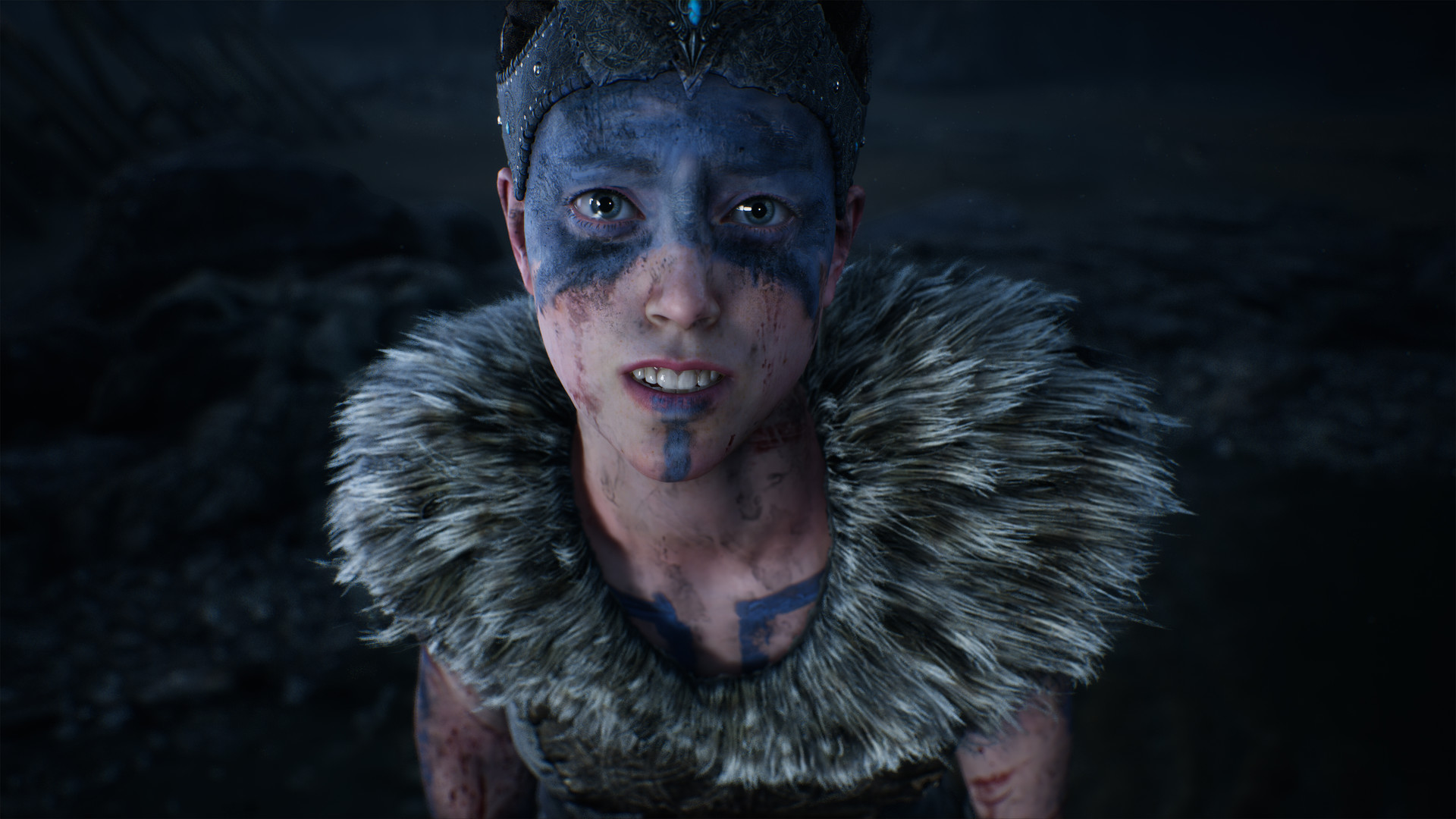 "There’s truly nothing like Hellblade and even if mechanically it can feel too simple while the exploration is mostly on-rails, it’s a compelling experience that’s worth your time."

Also, to address it right away without giving any spoilers: Don’t think too much about the so-called “permadeath” mechanic, which manifests itself in rot growing on Senua’s right arm. It’ll play a part in due time so don’t worry about dying a lot.

Despite being an overwhelming experience, Hellblade: Senua’s Sacrifice doesn’t feel awkward or crowded (and that’s despite having so many voices talking at once). The rune puzzles may get frustrating when you can’t find the right perspective and combat can get repetitive when the game throws multiple enemies at you in a single instance. Thankfully, the latter only really becomes egregious at one point and again, thematically, it made sense. In terms of pacing, Hellblade is deftly composed, keeping you on the edge of your seat with unique mechanics that don’t feel ham-fisted or out of place.

However, there’s so much more to be said about its wider themes of mental illness, about Senua’s mental state despite so much pain and ill-treatment. Hellblade isn’t an incredible story because of the depiction of psychosis nor is it amazing because of the implementation of Celtic lore, wonderful dialogue and performances from other NPCs or awesome cinematic moments that push the boundary of motion capture and texture work. It’s a great story and game because these two things go hand in hand. There’s truly nothing like Hellblade and even if mechanically it can feel too simple while the exploration is mostly on-rails, it’s a compelling experience that’s worth your time. Just make sure to play only an hour at a time lest the voices haunt you in your sleep.

Stunning visuals and aesthetics coupled with some remarkable motion capture. Melina Juergens' performance as Senua. Strong and responsive combat. Interesting puzzles with a few neat twists. Perhaps one of the best modern narratives of any media available. Excellent audio production.

Combat can be very simple and occasionally repetitive (lack of manual targeting can be weird at times). Some perspective puzzles can be frustrating. Exploration is very on-rails and doesn't venture far off the beaten path.

Final Verdict:
GREAT
It could be a whisper or a shout but Hellblade: Senua's Sacrifice will stay with you. Deftly crafted with stunning detail and an expert depiction of psychosis, it's a journey that's as torturous as it is heart-breaking.
A copy of this game was provided by Developer/Publisher/Distributor/PR Agency for review purposes. Click here to know more about our Reviews Policy.