Posted By Will Borger | On 30th, Oct. 2017 Under Article, Reviews | Follow This Author @will_borger

If you’re launching something new, you need something to show it off. The Xbox had Halo, the Dreamcast had SoulCalibur, the Wii had Wii Sports, and the Kinect had… something, I’m sure. Look, you get the idea. Most of these big launches are reserved for hardware, but a new software idea generally needs one, too. Enter PlayLink, Sony’s newest feature that revolves around playing games on your PS4 from your mobile device. Sounds a little weird, right? How would you sell that to someone?

If you’re Sony, the answer seems to be to hire a talented studio to make games specifically for that platform. In this case, that studio is Supermassive Games, the team behind the excellent Until Dawn. Hidden Agenda is a natural extension of what Supermassive accomplished with that game, and a good example of what PlayLink is capable of. 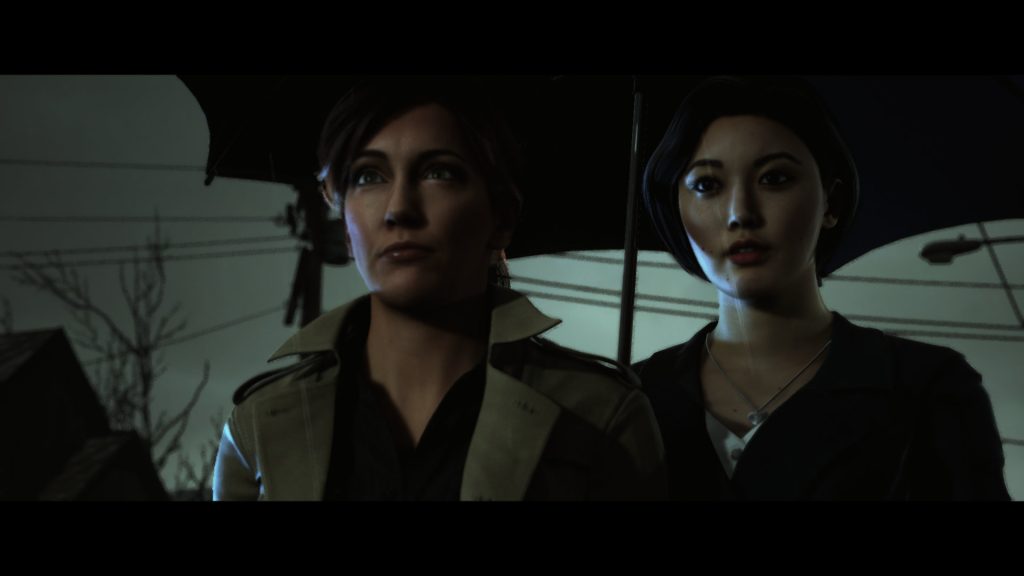 "Players take control of Detective Becky Marney (played by Katie Cassidy) and District Attorney Felicity Graves (Christy Choi) as they try to solve cases involving a serial killer known as The Trapper, who is notable for booby-trapping his victims in the hopes of maiming or killing first responders who arrive to help them."

Hidden Agenda is best described as an extremely streamlined visual novel, and when I say streamlined, I mean cut down to the bone. The game is little more than an interactive film where you occasionally offer input to determine the flow of conversations and control what happens during action set pieces. Players take control of Detective Becky Marney (played by Katie Cassidy) and District Attorney Felicity Graves (Christy Choi) as they try to solve cases involving a serial killer known as The Trapper, who is notable for booby-trapping his victims in the hopes of maiming or killing first responders who arrive to help them. Your decisions and reactions will control the actions your characters take, how well the investigation goes, and who lives and who dies.

The decisions range from how you’ll approach investigating a crime scene to how you interact with other characters, and the choices you make can have a significant impact on the game, reframing entire sequences and affecting the fates of multiple characters. Your choices matter here, and the sense of consequence keeps you engaged and encourages multiple playthroughs. This is good, because Hidden Agenda is a very short game – only a couple hours and change – but it’s compelling, and the high replay value means you’ll want to come back for more.

Playing the game means you’ll have to download a (pretty large) companion app to your phone or tablet, and up to six players can all play together on their devices. In Hidden Agenda, the point is really to offer second screen functionality akin to the Nintendo DS or Wii U. In addition to swiping your finger on your phone to make choices, and complete Quick Time Events that determine how your characters react to certain actions and help them find clues, you’ll also gain access to a logbook that tracks character biographies, major choices (called ripple effects) and a plot summary of current events, all of which are updated in real time as you play and can be accessed at your discretion. 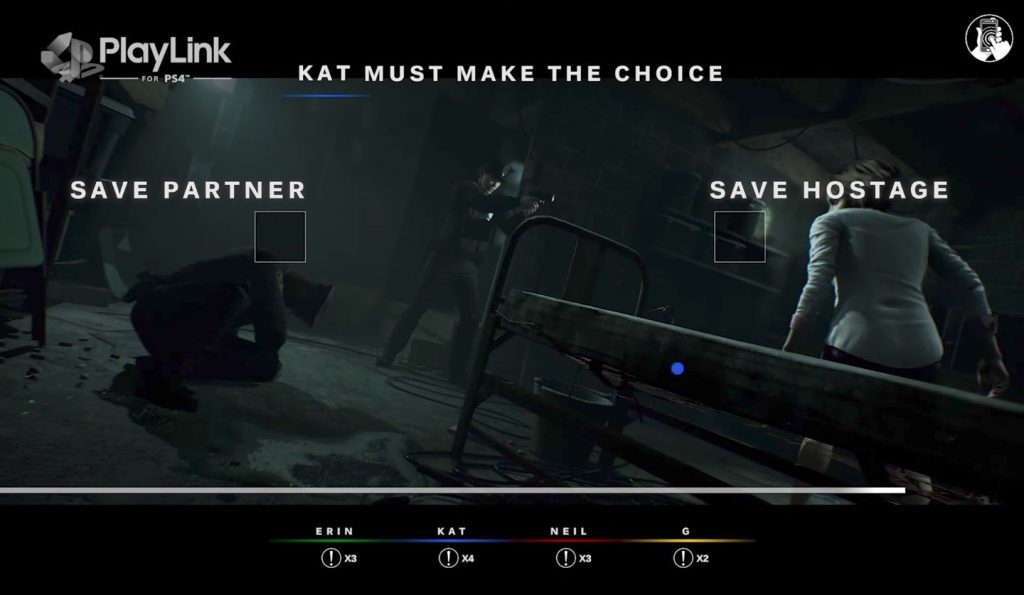 You can play the story either two different ways – in Story mode or Competitive mode. Story mode is the more relaxed version of the game, where all of the players work cooperatively and make decisions together. Competitive mode has players actively working against each other, and this is where the game’s Agenda system comes into play. At the start of each chapter, a random player is given an Agenda card, which charges them with carrying out a specific objective in that chapter. Thing is, you have to carry out your Agenda in secret, while the other players have to figure out who has the Agenda and what it is. Because the game operates on majority rule for major decisions, the Agenda has to convince the other players to vote a certain way.

If your persuasion skills aren’t up to the task, you can always play a Takeover card and take total control of the situation. Trouble is, playing a Takeover card looks incredibly suspicious and another player can play another card to take things back. If you’ve got the Agenda, your best bet is to get what you want by stealth and guile, without it looking like you’re trying to get it by stealth and guile. The competition also extends to situations where you’re searching for clues, as finding them earns you Takeover cards. The more you have, the more control you can exert.

The problem with Competitive mode is that it’s very easy to get so focused on completing Agendas or finding the Agenda player that it’s very easy to derail the story. Some of the Agenda objectives don’t make much sense in context, and while the game often handles choice and consequence well, missing certain clues or making certain choices can result in sequences where it feels like pieces are missing. Story mode solves this problem by removing the Agenda system entirely, but at that point, one wonders what the point of the PlayLink system is as a controller would work better. It’s not that the system is bad, but it can be clumsy during timed QTEs, and since some of those decisions matter more than others, and there’s no chapter select system and no way to undo them without restarting the entire game, any added level of frustration is unwelcome, especially if you screw up on a major decision near the end of the game. 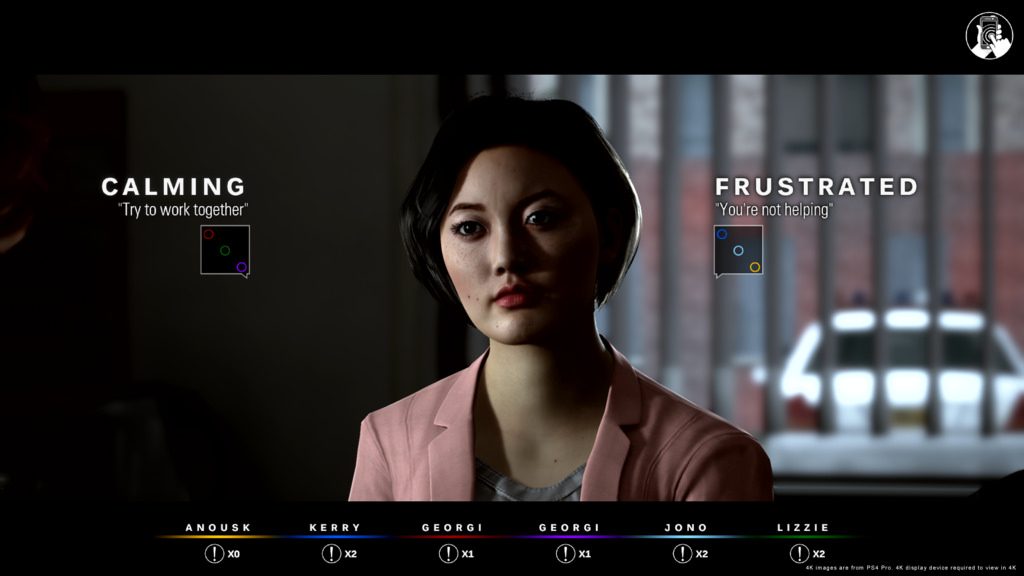 "I’m not entirely convinced PlayLink is a necessary system, and I wonder how much staying power it has. But I know this: I’ll be playing Hidden Agenda again, and I’ll probably bring some friends – and their phone chargers – with me."

And then there’s another problem: the system requires a phone that can run the app, a lot of spare space to download it, a Wi-Fi connection that’s the same as the one your PS4 is one, and multiple devices that won’t suddenly lose charge halfway through the game. You can see the logistical problems immediately, especially if your home doesn’t have many power outlets.

The other major issue is that because you control every decision, the main characters feel undefined. You can play Becky as an upright, trusting cop one minute and an angry, vengeful one the next. Simultaneously, Grace can be a hyper-serious district attorney in one scene, and a shameless flirt in another. It’s a problem in all games with choices like this, but it seems more pronounced here because you control two characters instead of one.

Even with these problems, Hidden Agenda is still fun. It’s an engaging crime story with solid writing, good performances, and absolutely gorgeous presentation, all at a budget price. The character models can enter the uncanny valley at times, and the environments occasionally suffer from the contrast with the people, but this is a well-presented, well-done game. I’m not entirely convinced PlayLink is a necessary system, and I wonder how much staying power it has. But I know this: I’ll be playing Hidden Agenda again, and I’ll probably bring some friends – and their phone chargers – with me.

No options for controller use. Set-up can be a bit tricky. No chapter select function, so a single mistake can ruin your progression. Agendas make it easy to screw up the story. Because you have so much control, the characters can be undefined.

Hidden Agenda is a fun co-op or competitive title with a good production values and a gripping story. The PlayLink system can cause issues and an unforgiving save system means that you may have to start over, but this is a well-made game that's extensively replayable and a killer with friends.

A copy of this game was provided by developer/publisher for review purposes. Click here to know more about our Reviews Policy.
Tagged With: PlayLink, ps4, Sony Computer Entertainment, Supermassive Games