Posted By Kartik Mudgal | On 30th, Oct. 2012 Under News | Follow This Author @KartikMdgl

E-Xpress Interactive–India’s largest games distributor–has announced a consumer preview version of the upcoming highly anticipated game, Hitman: Absolution. What this means is that people can get their hands on the game before its official release.

But there’s a catch, you need to be in Delhi, India, to check out the game as the distributor has tied up with Federation of Gamers for this event. The preview event will be held at DLF Mall in New Delhi, and most of you living in delhi probably know how to get there.

Hitman: Absolution is shaping up to be a terrific game, and as we mentioned in our preview here, it’s one of the best games of this year.

“IO Interactive and Square-Enix have something very special with Hitman: Absolution. They’ve taken the beloved franchise and significantly upped it to the level of an intelligent summer blockbuster. It’s absorbing yet intricate in it’s mechanics and rewards both the road less travelled and the one revisited. It’s already looking like a major winner, not only for the franchise as a whole but as one of the more compelling stealth/action titles to come out in recent years,” wrote our author Ravi. 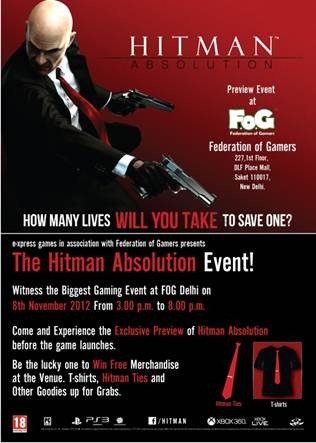