Two classic titles from Hitman’s past have been remastered on modern hardware. But do they really belong in the same package?

The Hitman games have left an immense impact on the stealth genre. No other series has so efficiently distilled the planning and care that the stealth genre requires. The franchise has also been making a comeback in recent years due to the last two entries garnering great response from critics and fans alike. And so, what better time is there to reintroduce some of the roots of the Hitman series?

After a surprise announcement earlier this month, the Hitman HD Enhanced Collection is now out on PS4 and Xbox One. The package contains the two titles- Hitman: Blood Money and Hitman Absolution. These two titles have been remastered and now play in crisp 4K at a steady 60 FPS. There has been some streamlining of the controls in order to make it more accessible and less cumbersome for newcomers but game balance hasn’t been altered at all. This experience is the same one that long-time fans should be familiar, but only at a much-appreciated higher resolution. 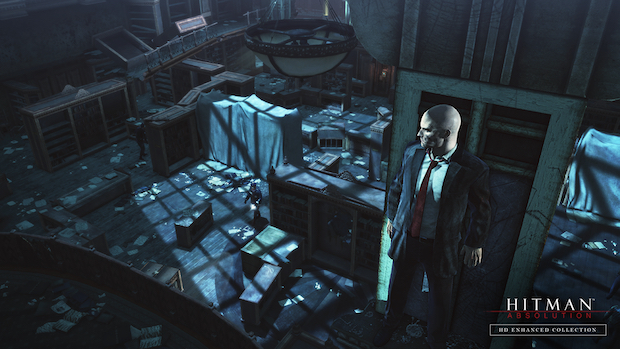 "There has been some streamlining of the controls in order to make it more accessible and less cumbersome for newcomers but game balance hasn’t been altered at all. This experience is the same one that long-time fans should be familiar with only at a much-appreciated higher resolution."

Let’s start off talking about Blood Money. Long considered to be the high point of the franchise, this title is comprised of multiple mini-sandboxes that require you to use cunning and creativity in order to take out your targets. You play as Agent 47 as you stealth, disguise, and kill through your missions in pursuit of your assigned target. You’ll globetrot across plenty of locales and won’t be wanting for variety in levels.

There is a story to Blood Money but it’s mostly used as a means to introduce more and more interesting missions throughout the game. The story is told through a present-day format and gameplay takes place as you flashback and realize these hits out. These also another assassination entity known as “The Franchise” that you must contend with during your play. Though the story does take some interesting turns, you can tell that the crux of this title lies within its gameplay rather than its compelling storyline.

But as it turns out, the title isn’t too hurt by this focus on gameplay. Not when the gameplay is so strong. You start off each mission by selecting the weapons that you’ll have access to, from your classic Silverballers to a high-power sniper rifle. After that, you’re given a target or two and set down in the level, free to plan and prepare however you wish. Though this may be imposing for a newcomer to the franchise, most of the areas are actually quite easy to digest. Levels usually follow a formula of being fairly simple on the surface but with many hidden routes dispersed through as you become more familiar with the area. If this isn’t enough, you can also purchase hints from the pause menu which can lead you in the right direction.

Classical music is central motif in Blood Money and that’s not by accident. Just as a composer needs to carefully place each note in its designated place, employing the right instrument and the appropriate amount of volume, you must set up and execute your missions in a sensible way, using the right tools and not allowing for any unexpected variables. This means taking out enemies quietly, hiding bodies, taking the clothes of others in order to gain entry into restricted areas. 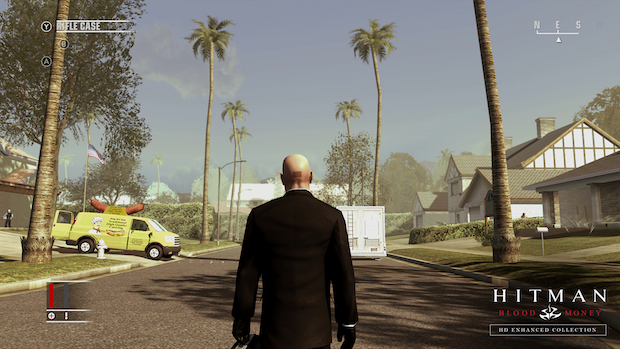 "Long considered to be the high point of the franchise, Blood Money is comprised of multiple mini-sandboxes that require you to use cunning and creativity in order to take out your targets."

You are graded on how expertly you finish a mission and you can tell how well you did by reading a newspaper article talking about the murder. If you were sloppy and left witnesses, the newspaper will include more details about you and the following missions will have tighter security. In this way, you’re rewarded for playing as stealthily as possible.

Stealth fans should definitely give Blood Money a go. Even those sitting on the fence should give Blood Money a try. Despite the hardcore reputation that it’s received from fans, the game is surprisingly forgiving to mistakes and you almost always have the tools at your disposal to worm your way out of a sticky situation. Blood Money is all about giving you the freedom to kill your targets how you want. And whether that be from tampering of a victim’s food or through a machine-gun massacre, both are accepted by the game.

The second game in this collection is Hitman Absolution. It’s an interesting choice to pair up with Blood Money because in many ways, they are each other’s opposite. While Absolution does give you choices and lets you loose in situations that have multiple potential solutions, the games could not have more different priorities. This is a title that may have been a result of the times when it was being developed or maybe due to publisher demands, but in a franchise that has essentially been refining the same formula repeatedly over each entry, this title is a huge deviation.

Whereas Blood Money’s storyline was more-or-less window dressing for the gameplay, Absolution is far more interested in telling a story and having a protagonist with pathos. The cold-blooded killer Agent 47 is given a “daughter” character to protect and is suddenly very forthcoming with the doubts that come along with his line of work. Absolution also leans heavily on dramatic set-pieces that see Agent 47 escaping exploding building and running away from helicopters on rooftops. These choices all come together in a way that don’t seem to coincide with the Hitman brand. This title probably would have been better received by players had it not been called Hitman, but that doesn’t mean this is a bad game at all. 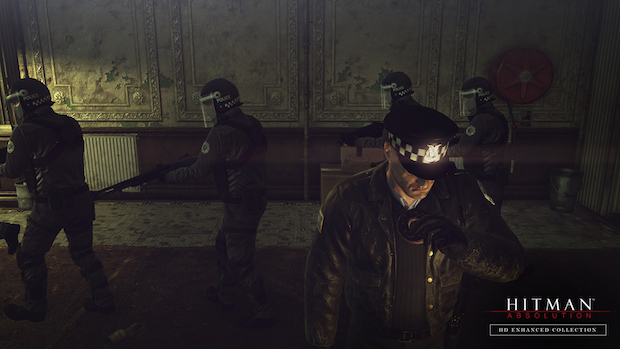 "Compared to Blood Money’s loose structure, Absolution is much more directed. Due to the more streamlined approach Absolution takes, you’re focused down a direct path and the possibilities for creativity are more limited. However, what the game gives up in creativity, it makes up for in variety."

Compared to Blood Money’s loose structure, Absolution is much more directed. Due to the more streamlined approach Absolution takes, you’re focused down a direct path and the possibilities for creativity are more limited. However, what the game gives up in creativity, it makes up for in variety. You’ll constantly be going through new areas and will encounter more carefully constructed guard rotations and obstacles. So while Blood Money had levels that were sprawling collections of choices, Absolution is more like a series of environmental puzzles you must figure out before you move onto the next.

Gameplay is quite a bit different in Absolution as well. You control much more smoothly than in Blood Money and have more options for stealth and combat in this title. Due to story circumstances, you don’t have access to your arsenal during missions and have to find usable equipment strewn throughout the environment. While this allows the developers to more carefully craft your experience, it sometimes streamlines a playstyle too harshly. You usually end up finding equipment when it would be most useful. So when you find a sniper rifle left out on a table, you know that the best place to use it is right nearby. Again, this isn’t a bad thing but it is a massive deviation from the Hitman gameplay of titles past.

Another tweak to gameplay that Absolution brings in is with its Instinct mechanic. With a button press, enemies and environmental objects are highlighted. While this already has the risk of making the game too easy, the mechanic doubles down by showing you the walking path of an enemy as well, letting you know exactly when a guard will be past your position. This mechanic is a good tool for letting newcomers to this genre enjoy the game but it is easily abusable. Having such a powerful tool at your disposal at all times can end up deflating a lot of the tension from sneaking around dozens of enemies at a time. Instead of Sam Fisher, you end up feeling like Frogger, watching your enemies from safety and only moving when you’re positive there’s an opening.

Disguises also work a little differently in Absolution. When you are disguised, other NPCs that share that uniform will be able to see through your disguise if you stay around them too long. The Instinct mechanic also ties into disguises as well. By using instinct, you can walk by suspicious NPCs without any alarms being raised. Though it’s not a bad idea by itself, it’s far too easily abused. If you have a lot of instinct saved up, you can end up walking right by a large group of enemies that would otherwise need to be stealthed around. So while this is an interesting idea, the Instinct mechanic once again neuters the tension involved with it. 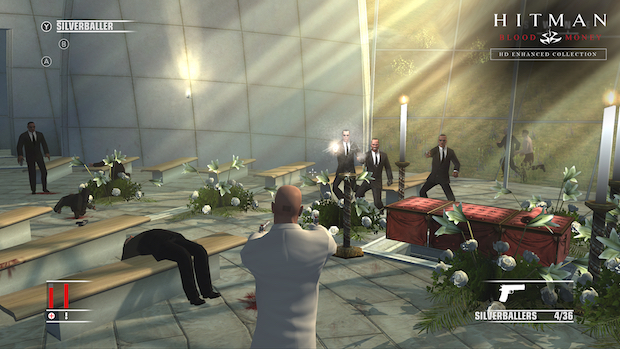 "Those players who live for the freedom to do whatever they want will balk at Absolution’s restrictions. And those who are looking for a more structured title will find Blood Money’s unfocused gameplay unfulfilling. Ultimately, I think that both of these games are worth playing."

Although it was initially derided by fans upon its release, looking back with hindsight shows off a much more competent title. Though it is worlds away from the more open gameplay of Blood Money, Absolution is a worthwhile title all on its own just for the refined gameplay and the constant new obstacles thrown your way.

Earlier I said how I thought it was an interesting choice to include both of these titles in the same package. It’s interesting because both of these games will appeal to completely different players. Those players who live for the freedom to do whatever they want will balk at Absolution’s restrictions. And those who are looking for a more structured title will find Blood Money’s unfocused gameplay unfulfilling. Ultimately, I think that both of these games are worth playing. They’re both quality titles in their own ways. But however good they both are, you should be prepared to only really love one of the titles in this collection.

Absolution’s Instinct mechanic breaks much of the challenge found in the title; Blood Money’s control feels stiff compared to Absolution; Some graphical effects in Absolution end up blinding the player with bloom.

For all but the most hardcore Hitman fans, this is an uneven package. Due to the extreme differences in gameplay, players will most likely only get the most out of one title while mostly ignoring the other.