The developers of HIVE answers some of our questions about the game.

HIVE: Altenum Wars is a hero shooter set in 2.5D view. The combat arenas are hexagon-shaped and they are divided into 6 different zones and each of these zones has its own gravity, which is different from the other zones. This is certainly going to allow for a lot of tactical play and for players to come up with interesting strategies.

To learn more about the game and its development, Gamingbolt reached out to David Rodriguez, CEO of Catness Game Studios and Programmer, with some questions and he provided the following answers. 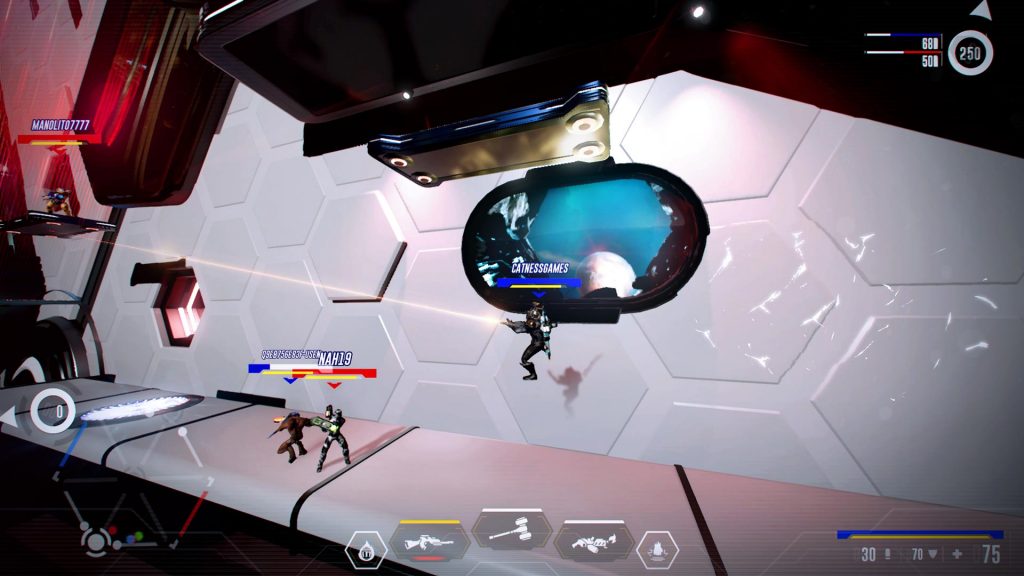 "We wanted to make a competitive game with that perspective because we saw that there were not a lot of games like this, that combines competitive-multiplayer gameplay, with some “retro” mechanics like the sidescrolling."

What inspired the idea of a hero-based shooter in 2.5D?

It was more like an evolution from multiple ideas. The beginning of HIVE was called “Project Warprise” and it was a MOBA in 2.5D, with minions, turrets, 3 vertical lanes… We wanted to make a competitive game with that perspective because we saw that there were not a lot of games like this, that combines competitive-multiplayer gameplay, with some “retro” mechanics like the sidescrolling. We saw overtime that the game should move into a more frenetic type of game, so we started to thinking in a more shooter-like gameplay. Then we started to quit some MOBA elements, like lane-based maps, turrets and minions, and that was the moment we design the Hexagon-shaped maps.

What can you tell us about the offline mode in this game? Is there a campaign to play through?

The offline mode is a secondary part of the game, is a “Survival” mode, with some objectives to achieve, and works pretty well for a practice-like mode, to try weapons, characters, and don’t get the feeling that you are in a “tutorial” for learning. There is not a campaign inside HIVE, but you can spend a lot of time in that survival mode, in which you need to move and protect a payload that will extract altenum fuel and charge it into the HIVE refinery.

What made you decide on going with Hexagon shaped combat areas? How does this affect gameplay?

With that hex-shaped map and with the dash system, we achieved a closed non lineal arena, with open areas in where you can do skillshots and dodges. That kind of mechanics are not common on sidescrolling games, which normally are more lineal platformers. But that mechanics are essential in hero-based games, so that’s why we work hard to achieve a nice way to do that in a horizontal 2.5D game.

Can you tell us a little bit about the distinctiveness of each of the different races in the game?

There are 4 races in the game. The difference is focused on the appearance, their history, and abilities. For example, UFG are more military characters, that have common weapons. NHC are more like beast, with more rudimentary weapons, melees, and close range abilities, EVO are more sophisticated, so they use more electric weapons.

It seems there’s quite a bit of lore behind the whole game. Could you elaborate on this?

There are a lot of lore, but only a small part is shown inside the game. The history talks about a planet called HIVE IV. That planet is rich in altenum, one of the most precious mineral of the future, which is used for a big source of energy, so that’s why different races want this mineral, and will fight for them. The full story talks about the decadence of the planet Earth; there are not enough resources for all the humanity and there was the start of the conflict.  With the discovery of altenum, a new hope rose, but EVO (eobots created by humans) started to develop autonomous intelligence and started to fight humans for the altenum. The resources of altenum on Earth were low, and that force humans and EVO to stop fighting and exit to the outer space in search of the altenum. That was the moment they found HIVE IV, and started to fight between them, and NHC and YILL.

What can you tell us about the 6 different zones in the combat area? How do these affect gameplay?

Each zone have its own gravity direction, but each zone is designed to create a unique area with different platforms, open and closed spaces. So you need to know each part of the map. In King of the hill, the map is more balanced, and is designed to move fast between points when they change, and there are places in which you have some advantage if you fight with explosives, for example. On the Team Deathmatch map there are zones in which you cannot fly away, and are some corridors in which the common lineal weapons or melee are more important. 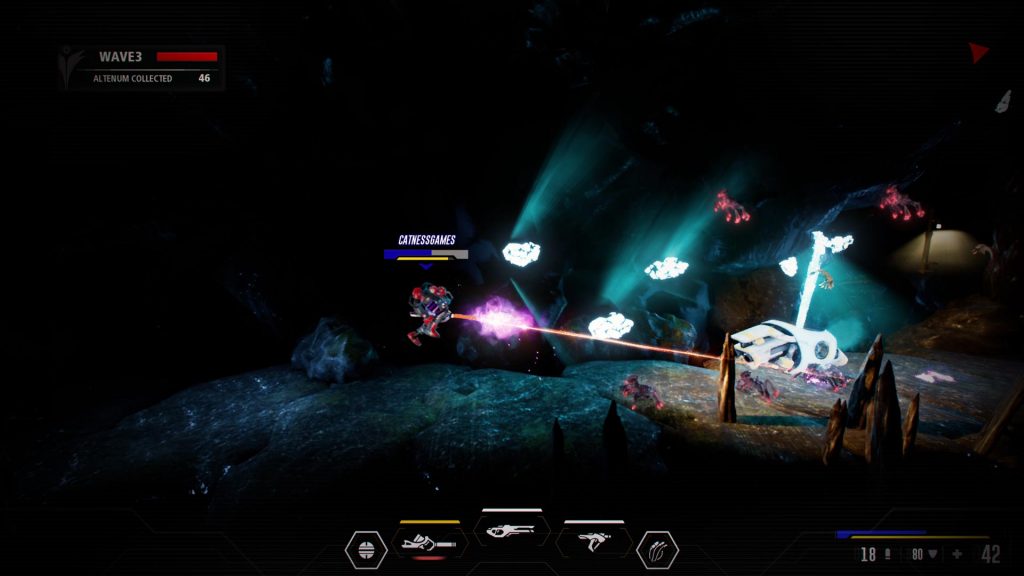 "Gameplay-wise, we tried to make a something new, but there are mechanics inspired from other games like Overwatch, and many MOBA games or shooter games."

What are some of your post-launch plans for HIVE?

We will keep developing HIVE. We have some updates prepared to be tested and soon there will be a lot of new content. For the moment, people can see that there are 2 “Coming soon” new characters, but this is just a small part of the new things that we are preparing.

What are some of your inspirations behind this game?

There are a lot of inspirations behind the game, most of them from other sci-fi games, movies or series, like Doctor Who, Star Trek, Mass Effect, Dead Space… We took a lot of references in order to build the history and characters. Gameplay-wise, we tried to make a something new, but there are mechanics inspired from other games like Overwatch, and many MOBA games or shooter games.

A lot of challenges. This was our first big project, and we learn a lot of things by making our game, and also made a lot of mistakes that delayed the launch of the game. But by far, the Online system, the Dynamic gravity system, and the porting to PS4 were the 3 most time consuming, hardest, and most frustrating challenges.

Are there plans to bring to have a Western release for the Nintendo Switch?

Not at the moment, since we have a 3-year console exclusive with PlayStation 4.

What are some of the challenges you faced during the game’s development?

Making a online game with 10 simultaneous players was a big deal. Also, we had to modify the Unreal Engine source code in order to get our desired dynamic gravity. Modifying this and make this working with the current replication system was a pain too.

There are not big differences as we are working with Unreal Engine 4, since we work in a layer that is not platform-specific. Maybe some shaders are different, and the online services for the matchmaking and leaderboards works quite different. There are also some platform specific functionality, like Play Together, trophies, invitations, and that needs to be done specifically. 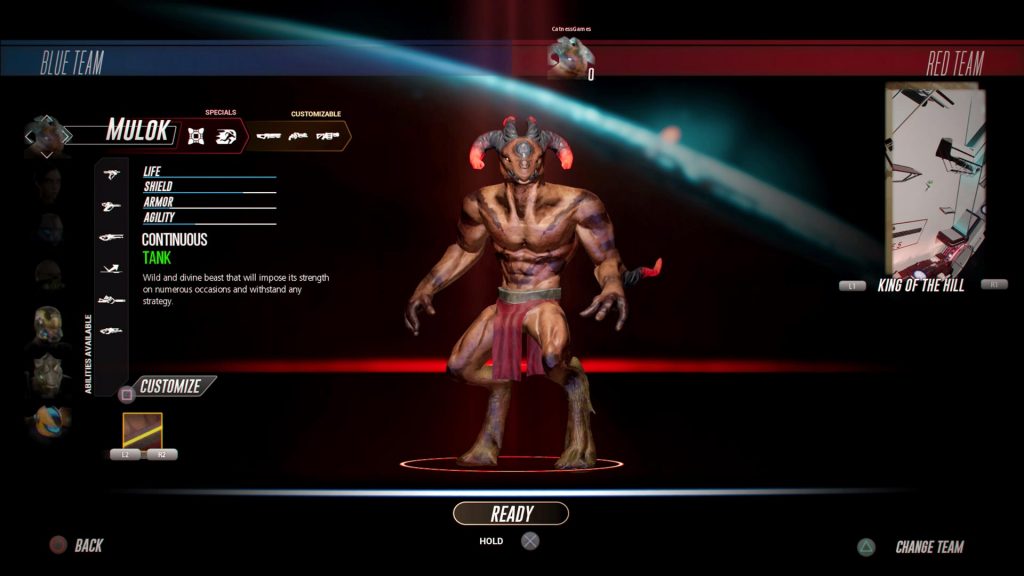 "Sometimes we consider adding some microtransactions to get skins, but for now, everything will be a reward for playing."

Mark Cerny, the lead engineer of the PlayStation 4 Pro claimed that converting a base PS4 game to PS4 Pro version is just 0.2 Or 0.3% of the overall effort. What is your take on this? Do you think that the extra work required to develop an additional Pro version will actually be bigger than the number quoted?

For us it was not a big trouble, just a few modifications to some config data, so yes, in that case Mark Cerny is right. But that’s because our game is not supporting 4K for the moment, nor any other specific PS4 Pro feature. We know that adding 4K running at a good frame rate will take us some more effort than 0.3%.

Sony have an advanced work distributor in PS4 Pro along with new Polaris features like Delta color compression. What is your take on these features and do you have plans to take advantage of them?

I don’t think most users will be able to notice those features. Anyway, I think they are usually covered by the game engines.

Is there a specific reason why you are not launching your game on the Xbox One?

No, and we don’t have any plans to put loot boxes. Sometimes we consider adding some microtransactions to get skins, but for now, everything will be a reward for playing.

I think not-paid loot boxes are a great idea for some specific types of games, but I don’t like the way that big companies, with tons of paid downloads at a high price, are abusing and taking so much profit from it.

I’m not sure, actually. I don’t expect big changes but more computacional capacity to get more realistic graphics in very huge scenarios. I would love see huge sandbox games with an accurate scale to the real cities and villages and the space between them.

Just keep playing! Give a chance to small studios like us, and try indie games!