Homefront: The Revolution has an uphill battle if it has any chance to be relevant when it launches this May.

During the weekend, the closed beta for Homefront: The Revolution was open for those who received a code and an extra code for a friend. For those who didn’t receive a code, or weren’t lucky enough to have friends that could share one with you, don’t worry, you did yourself a favor. Homefront’s beta ended up being an unmitigated disaster.

Without the excuse of console networks going down, or other uncontrollable mishaps game developers are not responsible for, what was left of Homefront was dry, dull, very ordinary and uninspired first-person gameplay.

Fighters allows for further customization of your chosen character. You can select from Gear and Clothing, Primary and Secondary Weapons, Skills, Consumables (locked through beta), and Change Character. Most items were locked but many could be unlocked from working through Quick Play.

The skills tree contains 4 branches ranging from Brains, Brawn, Fighter, and Survivor. Each Skill branch thereafter had 4 Tiers of unlockable Skills. Some skills were locked through the beta, as well. Acquiring the ability to unlock skills through Skill points is obtained by earning the necessary kills and wins through each round within Quick Play. 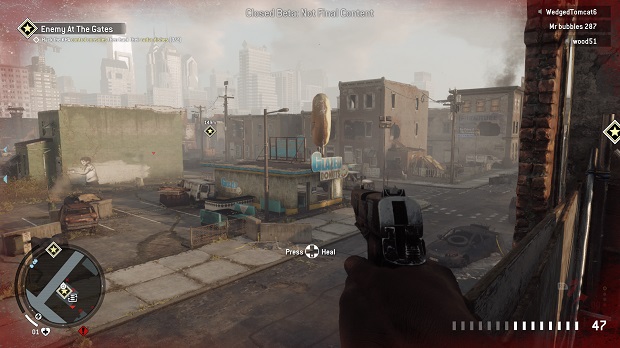 "For those who didn’t receive a code, or weren’t lucky enough to have friends that could share one with you, don’t worry, you did yourself a favor. Homefront’s beta ended up being an unmitigated disaster."

The Armory category allowed for the purchase of unique item unlocks with the use of in-game money. Again, earned by just playing the game. Within the beta, the following packs were available:

Each crate came with randomized items. I unlocked a Gear Crate earning me a Black Beanie and Explosive Ammo; an Ordinance Crate that unlocked Light Machine Gun, Muzzle Brake, R/C Car firecrackers, and Hack Ammo. Items between players are never the same, but the amount of unlockables within the beta were few.

As for Quick Play, the Homefront beta was equipped with three co-op levels that could be played with friends or strangers. The maps available were Infiltration, Enemy at the Gate, and A Las Barricadas. These maps were co-op only against enemy AI. Unfortunately these maps did nothing to convince me the game was up to current gen standards by any means.

Faces within the game were pixilated, vehicles looked almost like rough and unfinished, and the general aesthetics of the maps were just plain ugly. Betas are somewhat forgivable as these are still productions that are unfinished and still need some work and maintenance. However, this late in the game it would be nearly impossible to smooth out these in game graphics, and make everything look standard or better than standard by today’s definition of what’s acceptable.

The last map I finished playing within the three was A Las Barricadas. Strangely enough, this map actually looked semi-decent. Graphics were acceptable, but like the other two, no where near today’s graphics fidelity.

Moving on to the shooting. Aim assist was set on default and I never figured out if it could be toggled on or off. But holding the trigger near an enemy AI would automatically center the crosshairs onto it making it an easy target. But again, the AI was just plain stiff. They had no personality traits that allowed them to standout from looking semi intelligent. Again, yes this is a beta, but a beta should not be a word used to excuse a game from every element it possesses. 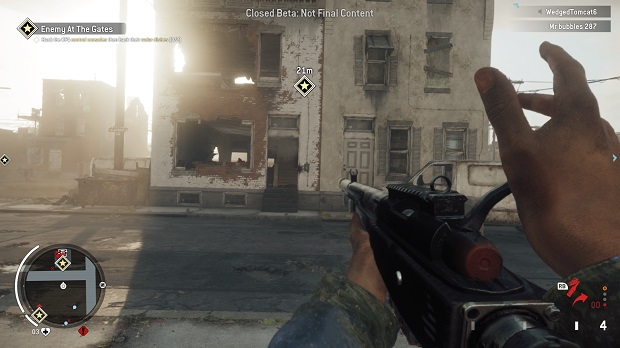 "These maps were co-op only against enemy AI. Unfortunately these maps did zero to convince me the game was up to current gen standards by any means."

Eventually, I found a motorcycle where I could drive around the fairly sized maps. Driving was clumsy, slow, and never felt like the controls were right. Luckily, hitting objects within the game wasn’t that bad. The motorcycle never flew me off of its back, but instead, when I hit an object I would either stop or it would find its way around said object. So there’s some good to be found.

Each of the three maps were very uninspired. Remember the fog that enveloped Superman 64? That’s what you’d have found within one of the maps called Enemy at the Gate. This map was swamped in smoke and dust with hues of browns in every square inch. What’s worse than awful graphics drenched in heaps of fog? Texture pop-in. It was heavily used within Homefront. Pop-in usually occurs when graphics are too heavy to be within the background of any given level. So the engine holds those graphics back until the character gets near enough to have to notice said graphics. Homefront played almost a reverse in this front. Texture pop-in occurred just feet away and with many simple objects such as boxes or bushed. It became quite distracting to see pop-in around every turn throughout my entire experience.

Fortunately, a lot of these problems should be addressed by the time the game launches this May, but improving graphics and the uninspired map design will more than likely not be touched. When I saw this demo at E3 last year I was very excited to get my hands on it, but I’m not sure that’s the case any longer.