Game Designer Felipe Dal Molin from Aquiris Studios answers some of our questions about their game, Horizon Chase Turbo.

Horizon Chase Turbo is an arcade racer that will evoke fond memories of retro racing games from the ’90s. The game was initially released for mobile devices and it was only recently that it became available on PS4 and PC. There are also some changes that have been made with these new versions of the game.

To learn more about these changes and about the development process, Gamingbolt reached out to Aquiris Studios and Game Designer Felipe Dal Molin who answered the following questions. 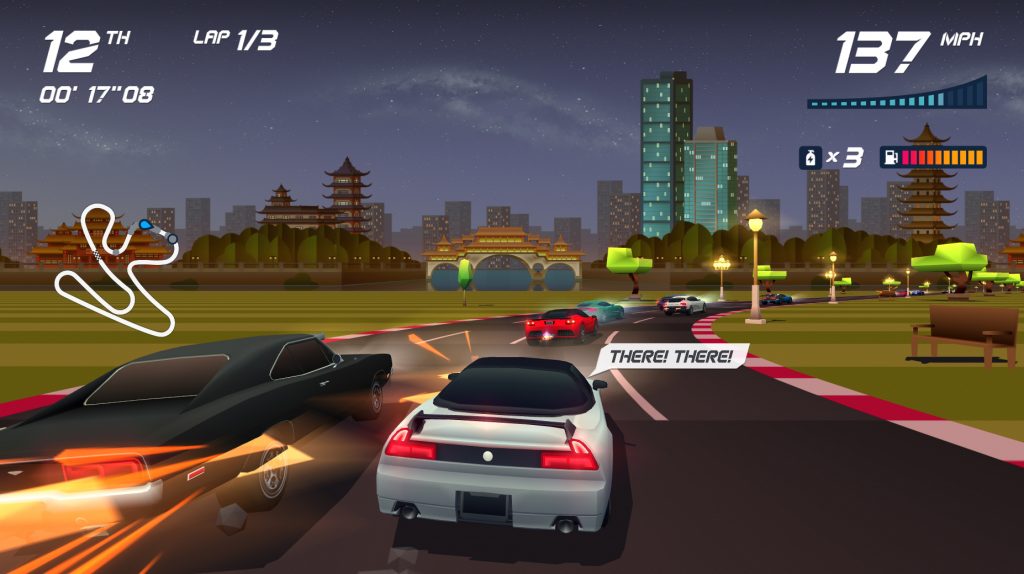 "This version was made from the ground up with consoles, PC, and multiplayer in mind. Our main thought was how to offer different ways to play Horizon Chase, alone or with friends."

Was it always a part of the plan to try and bring the game over to consoles and PC?

It’s always been our dream, mainly due to the split-screen multiplayer. Horizon Chase World Tour was made with mobile in mind, but knowing that it should be ready to turn into something else. Seeing the acclamation on the game, we were sure that we should engage on developing Horizon Chase Turbo.

What are the main differences between this edition and Horizon Chase World Tour?

This version was made from the ground up with consoles, PC, and multiplayer in mind. Our main thought was how to offer different ways to play Horizon Chase, alone or with friends. Turbo supports up to 4 players in split-screen across all game modes: World Tour, Tournament and Endurance, plus the online Ghost. We made the game fit sessions from short to long, competitive or cooperative, always unlocking new content as you advance in each mode.

Turbo has much more content: 109 tracks and 31 cars in total. A lot of the original tracks were reviewed for this version, and there’s the unseen tracks in China and Japan. There are races in Tokyo, Sapporo, Beijing, the Great Wall and several others.

We have also made huge improvements in presentation, like the 3D globe you use to move through cups, 4K support, improvements in sound and feedback, and better balance overall.

Were there any difficulties you faced in bringing the game over to non-mobile devices?

Yes! Mainly due to the multiplayer features and our commitment to not make a simple port, but a new game. Making sure the game was running at 60fps in 4-player split-screen proved a challenge even with Horizon Chase’s low-poly visuals. Getting the ghost right too. We also felt the need to clarify the conditions for unlocks and had to add some new features to make the gameplay more complete on consoles and PC.

What would you say are some of the crucial elements you had to get right to capture the feel of a retro arcade racer?

The colorful visuals, the music, how fast it feels and how straightforward it is. You’ll never get sidetracked and head the wrong way, for instance. All your decisions are about tearing through the opponents, avoiding obstacles and trying to keep your momentum.

How does the split-screen local multiplayer campaign work?

It’s the World Tour: a drop-in, drop-out campaign across 12 cups (109 races total). When you’re playing with someone, points are scored together, cars and upgrades unlocked are valid for all players, and everyone advances as a group. As soon as you enter a race, it turns full-on competitive — all that matters is finishing first. The campaign is also the go-to mode for a quick one-on-one with a friend or a ghost.

Why did you decide not to include online multiplayer? Is this something that could change in the future?

It was half project vision, half technical decision: from the start, we devised Horizon Chase Turbo as a game that draws people together in a personal, amicable way. Limited scope of competition and limited trolling capacity can make for a good, old-fashioned experience. Beyond that, making the fast gameplay work well online would be an investment that we chose to put in other aspects of the game. It’s knowing what the game is and what it’s not. But that’s not to say this decision is final. 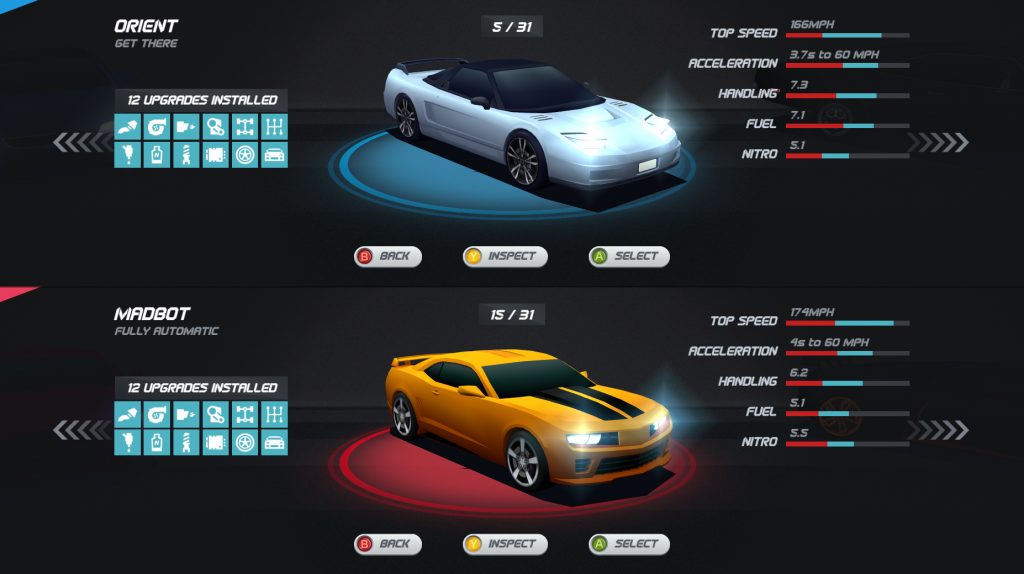 "We tried to make art and music that felt good as you’re racing."

The art style and music seem like crucial aspects of getting a game like this right. What was your approach to these aspects of the game?

We tried to make art and music that felt good as you’re racing. For instance, when creating the scenery, we went for low-poly objects that could be recognizable at 200 mph, through color and silhouette, more important than being realistic or detailed. Same for the soundtrack: Barry tells of how much he likes listening to the tunes as he drives through the countryside.

What had inspired you to develop a retro-styled racing game?

The good times we had playing these games as kids and teenagers. But also, our understanding that, as technology evolved, the racing genre lost something along the way. We believe that good play is universal, regardless of age, and there is something inherently good in this old way of making racers. That was our chase: to reclaim what was so good about it and improve upon.

Would you say there also some important differences in how this game plays as compared to the older games you draw inspiration from?

Sure! We put effort into making Horizon Chase Turbo play not exactly like the old games, but like our best memories of how they used to be. That is, way more polished and satisfying despite having the same core. There’s also a new level of interaction that comes with 3D, like cars bumping into each other to help make a turn, something we didn’t have in OutRun, Lotus or Jaguar XJ220. Overall, you have a better sense of presence and control in Horizon Chase.

The most obvious difference is platform integration for online features such as online leaderboards and the ghost mode. Since we’re using the platform holders’ backend systems for that (i.e. PSN and Steam), we had to integrate these separately.

Apart from that though, what may be more surprising are the differences in input handling. The PS4 solved a lot of the problems associated with local player assignment with its user/devices management system, so we embraced that from the start. However, we have none of that on PC by default. So, we also took it upon ourselves to raise the bar for local multiplayer handling on PC by implementing a robust player profile and device mapping subsystem in the game.

I think these figures are about right for our case. Since we worked from the start with the PS4 Pro and 4K support in mind, it wasn’t difficult at all to support both versions of the console – we actually had a harder time squeezing enough performance off the base PS4 (while the Pro runs the game at native 4K at full 60FPS without much problem). Sony did a very smart move by keeping 99% of the device architecture and OS the same in the PS4 Pro, because that’s resulted in a far easier time for developers and mostly avoided the device segmentation issues present in platforms like Android (and even iOS). 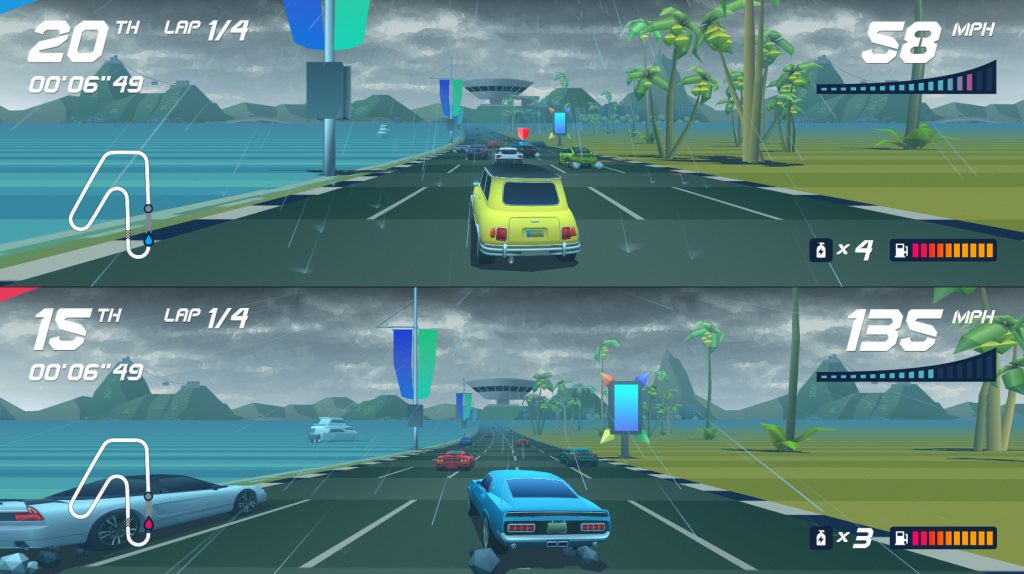 "We’re focusing on Switch and Xbox One as soon as the PS4 and PC versions are out."

Sony have an advanced work distributor in PS4 Pro along with new Polaris features like Delta color compression. What is your take on these features and do you have plans to take advantage of them?

Since these features are inside the GPU architecture, all games benefit from them indirectly. In the case of Delta Compression, I’m sure it helped us achieve native 4K with 4xMSAA enabled at 60FPS due to the higher effective bandwidth and fill rate in the Pro’s GPU.

Is there a specific reason why you are not launching your game on the Xbox One?

For a few reasons, our relationship with Sony started much earlier than with Microsoft so we got all the dev kits and such in place before. Anyway, we’re looking forward to having HCT running smoothly to all Xbox players as soon as possible.

Any chance of a Nintendo Switch version?

Yes! We’re focusing on Switch and Xbox One as soon as the PS4 and PC versions are out.

Not at all. Although we don’t discard the possibility of developing additional downloadable content later on.

Good things may come from this model, as we’ve seen happen with arcades, with domestic consoles, and last with online gaming. There’s a resistance from us players that’s part not being willing to embrace the new, but also a safety measure against bad practices. Past the monetization excesses, I think we’re left with a model that acts more like TV or “comfort food”: games that offer a safe place to return to, instead of asking the player to be always on the lookout for novelty. As with all technology, there’s good and bad in that. 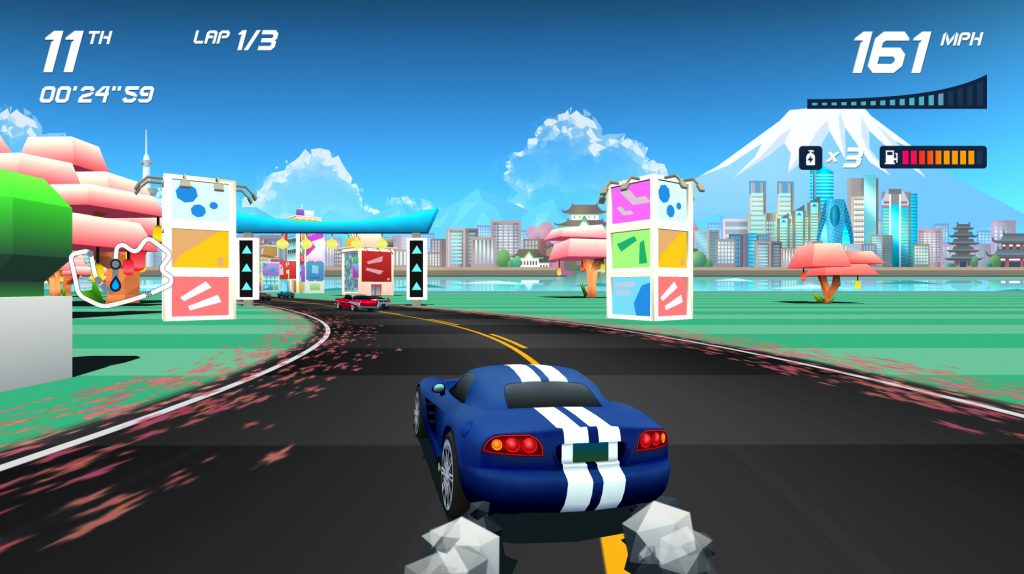 "Horizon Chase was born of a dream of recovering a lost kind of racing game, and with this bigger version the dream has finally come full circle."

A more comprehensive vision of what games are capable of as a medium. New and better ways to play. New kinds of developers putting games out, from all around. New narratives other than our power fantasies, made for all sorts of people. An understanding that good play is platform-agnostic and timeless. And of course, an improvement over everything that made us love videogames in the first place: visuals, story, gameplay, music, message, competition and cooperation, curiosity…

If it also drives the medium forward in ways other than visual sharpness, I’m good with that.

Horizon Chase was born of a dream of recovering a lost kind of racing game, and with this bigger version the dream has finally come full circle. We sincerely hope you and your folks have loads of fun competing and travelling around the world with Horizon Chase Turbo! The game is out for PC and PS4 on Tuesday, May 15th.