Indie Developers: This Is Why You Don’t Threaten Steam If You Are Working With Them 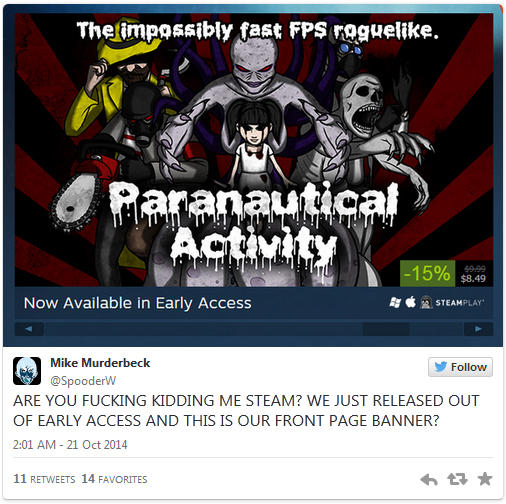 In a situation that escalated very quickly, an indie game, called Paranautical Activity, ended up being pulled from Steam yesterday, and its developer’s Steam Developer account suspended, after a small situation blew up in the face of all involved.

It started when Mike Maulbeck, the creator of Paranautical Activity, released the final version of the game yesterday; Steam started to advertise the game on their home page, except for one small mistake- the banner indicated that the title, which was now a fully completed game ‘officially’ released, was still in Early Access.

“This being a project I spent years of my life on, I was very frustrated by this mistake [Valve] made, so I tweeted a series of tweets calling them incompetent that eventually ended in me saying ‘I swear I’m gonna fucking kill gabe’ or something,” Maulbeck said in an email to Polygon. “A statement I obviously didn’t mean, but nonetheless was totally unacceptable and driven entirely by the heat of frustration I was feeling at the time.”

And yep, that’s pretty much what he did- in a series of tweets, Maulbeck went on a rant against Steam, calling them incompetent, a ‘piece of fucking shit,’ a monopoly on PC gaming, before finally declaring that, ‘I am going to kill Gabe Newell. He is going to die.’

Guys, it’s okay to feel bad and frustrated when something like this happens, and it’s okay to rant, but don’t do it publicly where everyone can see. Instead of e-mailing Steam like he should have, Maulbeck flat out says on Twitter in a (now deleted tweet) that he will murder Newell.

Do you wanna guess what Valve’s response was?

“Yes, we have removed the game’s sales page and ceased relations with the developer after he threatened to kill one of our employees,” said Valve’s Doug Lombardi in an email to Polygon.

Maulbeck, for his part, is contrite and abashed, and wants Steam to reconsider its decision, though he has stated that he isn’t too hopeful.

“I have since obviously replied to them saying that I didn’t mean what I said and pleaded that they consider the monopoly they have on the PC market before totally writing us off,” Maulbeck said in an email to Polygon, “but let’s be real. If they took the game off the store, they’re fuckin sure about their decision. There’s probably nothing to be done.”

But this wasn’t the end of all the drama either. It all ended with Maulbeck stepping down from his position as the head of his development company:

“I feel is it my responsibility to step down from Code Avarice completely so that Steam has no reason to harbor any more ill will towards the company, and maybe even if we can’t see Paranautical Activity restored, at least future Code Avarice games may be allowed onto the platform,” he said.

Yeesh. Guys. This is why you don’t treat public forums as your private venting grounds.