Industria is far, far from perfect- but it's not without its merits.

Industria is the sort of game that, if you get down to it, you could easily poke plenty of holes in. It’s a game with several issues, many of which are far from insignificant, and collectively, they do drag down the experience in several ways. In spite of that, personally, I find it easy to recommend Industria– because as flawed and rough around the edges as it is, it feels ambitious and unique, in a way that I feel deserves praise, not least because this is a game made by just two people, and because it’s a breed of first person shooter that has become increasingly rare as time has gone by.

Set in the late 1980s just before the end of the Cold War, Industria sees you playing as a woman named Nora. Awoken by a call from her close friend and colleague Walter, she is informed that ATLAS – a hive mind AI that the two of them have worked on together – has gone haywire somehow. Instantly, she sets off to their place of work to find and help Walter, but upon arriving, she quickly realizes that things are worse than expected. One thing leads to another, and Nora soon finds herself in a parallel world, separated from her own in ways she doesn’t understand. This world, she quickly realizes, is decrepit and abandoned, inhabited by almost no one and nothing except creepy machines and automatons who are hostile to the point of attacking anyone they lay eyes on. 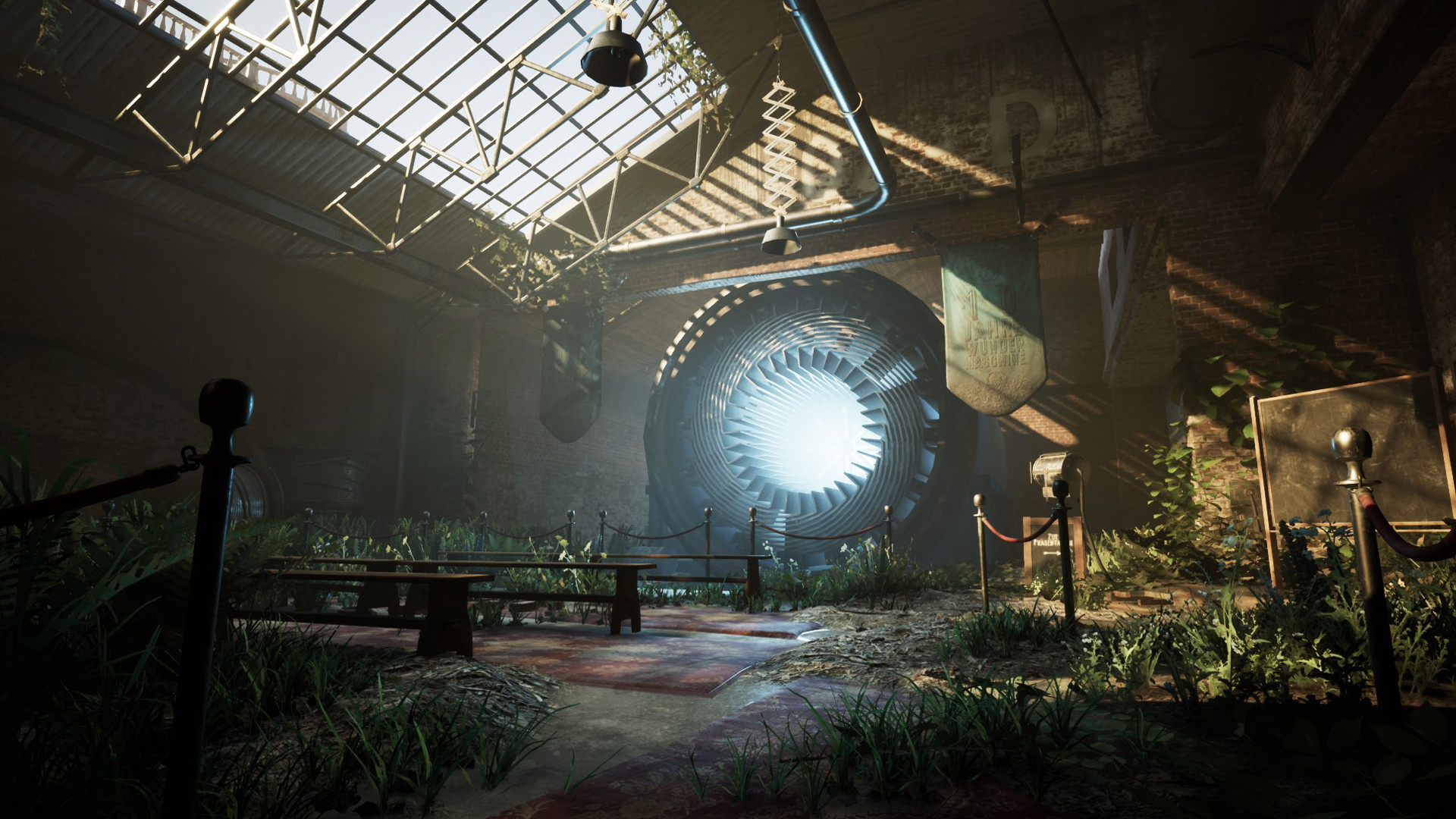 "As flawed and rough around the edges as it is, it feels ambitious and unique, in a way that I feel deserves praise, not least because this is a game made by just two people, and because it’s a breed of first person shooter that has become increasingly rare as time has gone by."

Industria’s world and story are easily its biggest strengths. The vibe and aesthetic are excellently realized, combining 1980s lo-fi with steampunk and new weird aesthetics, to concoct something that feels wholly unique. From the very first second, Industria pulled me right into its setting, and the more I played it, the more I was drawn in. It’s also a game that’s very good at raising questions and presenting tantalizing mysteries, and encouraging you to slowly piece things together by dropping bits and pieces of lore and story. It’s all done very well, and it helps immensely that the narrative-related discoveries you do make are interesting to varying degrees. Even if the stuff you’re uncovering can be generic at times for the kind of story this is, it’s the way you discover it and the way Industria presents its story and its world that makes it all so interesting.

Visually, too, this is an impressive game. Obviously, this is a small production, made by a small team on what is clearly a tight budget, so you absolutely shouldn’t go in expecting anything close to a technical masterpiece. What this is, however, is a visually crisp game. Environments are surprisingly detailed, the art style is excellent and contributes significantly to bringing the game’s world to life, and the locations you traverse and explore and the enemies you fight are brought to life to great effect. Serviceable on a technical level and impressive on an artistic one- that seems to be the best way to describe Industria’s visuals.

Sadly, while there’s plenty to be impressed by when it comes to Industria’s world, narrative, and storytelling, when it comes to actually playing the game, the bad outweighs the good by quite some margin. Structurally, Industria takes a page out of the original Half-Life’s book, combining deliberately paced exploration with puzzle-solving and some combat, along with a few survival horror elements thrown in for good measure. Almost none of those many disparate elements is very well implemented in practice though.

"Industria’s world and story are easily its biggest strengths."

Combat feels sloppy and unimpactful. None of Industria’s weapons have too much weight to them, the feedback after firing a shot feels almost non-existent, and it doesn’t help that enemies don’t react too satisfyingly to being hit, even if it’s a lethal shot. Puzzles, meanwhile, fare far better, and simply walking about the environments and figuring out where to head next, what to do next, or how to do what you’re supposed to do next can occasionally be fun- but a lot of the time, the stuff you’re supposed to do is pretty straightforward, while every once in a while, it feels a bit too obtuse, especially when the game frustratingly decides to give you next to no assistance.

Where Industria really stumbles, however, is its movement. The simple act of moving around and interacting with the environment feels like a chore- and that’s never good. Movement feels clunky and cumbersome, which is exacerbated by the fact that, for some reason, you can’t move diagonally in this game. It’s just four directions, and that’s something that quickly gets grating, especially in combat encounters. Often, you’re required to jump up over obstacles or across ledges to move forward, and that, too, can feel incredibly frustrating, because the height of your jump in Industria is pathetically minute, which means you often have to get weirdly precise with the placement of things that you’re using as steps to move upward and forward.

A lot of the game also revolves around looking at specific things and interacting with them by pressing a button, but the game demands very precise and specific aiming, which just doesn’t gel well with its sluggish controls and movement at all. Then there’s crouching, which is done by holding the stick that is also used for movement. As you might image, crouching while moving (which you do every once in a while) becomes quite unwieldy. That’s doubly true for occasions where you have to to interact with something while crouching. Movement and moment-to-moment gameplay feels sluggish and awkward in Industria, then, and that impacts nearly every aspect of the game. It’s a big issue, to say the very least. 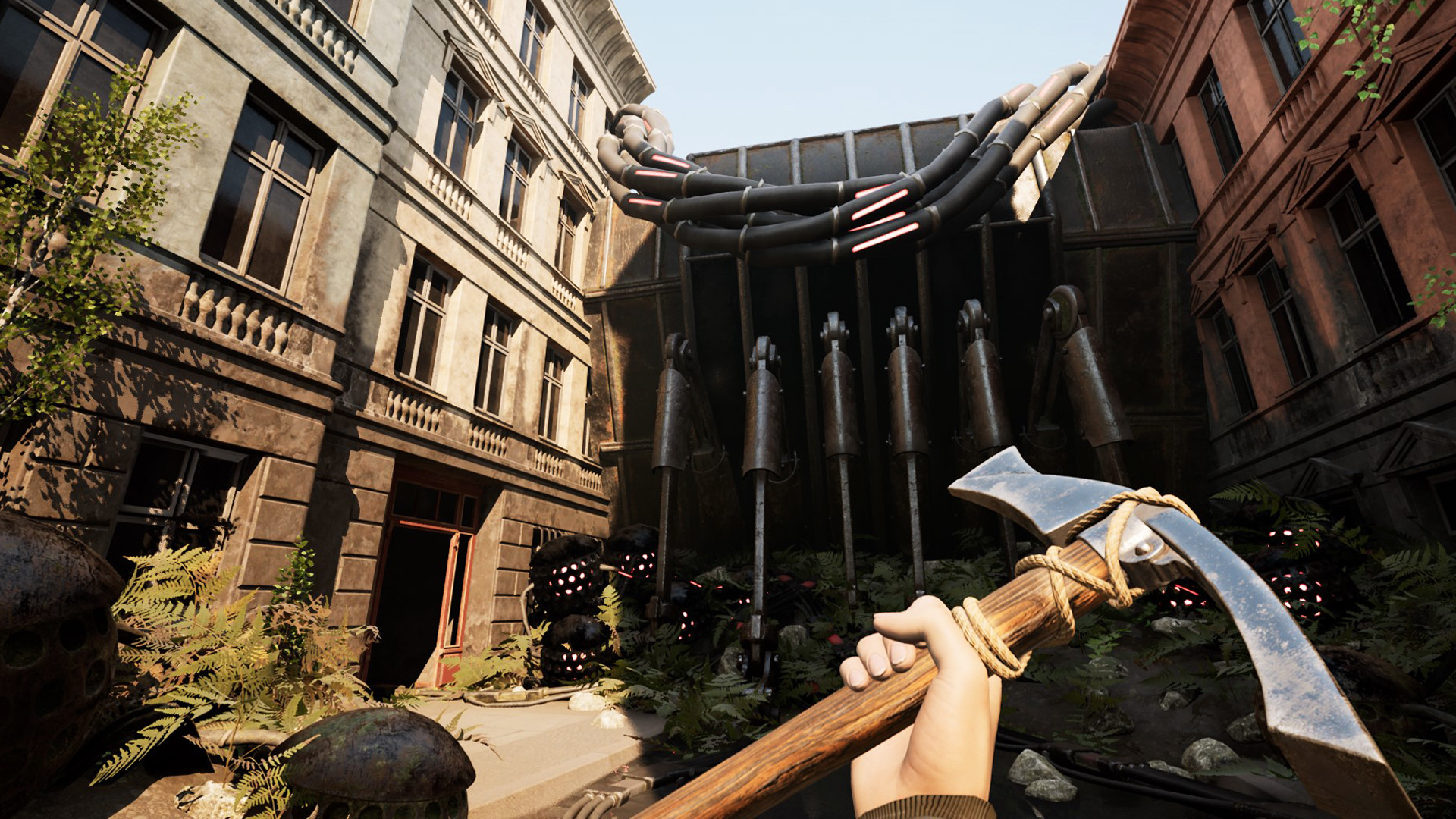 "Movement and moment-to-moment gameplay feels sluggish and awkward in Industria, then, and that impacts nearly every aspect of the game. It’s a big issue, to say the very least."

Industria has some technical issues as well. In the time I spent with the game, I ran into a few audio and graphical bugs, like dialogue lines cutting out before they could be finished, some wonky physics for objects, and one crash that froze my game and forced me to restart it. I was playing the game on Normal difficulty, which means I had autosaves enabled, so thankfully I didn’t lose a great deal of progress- but if you play on Hardcore, where manual saving is the only way to save your progress, crashes could be a bigger issue.

Industria is a wildly imperfect game. It has significant issues in areas that affect nearly the entire experience, and get in the way of enjoyment in ways that aren’t easy to ignore. When the simple act of moving around isn’t fun and the core gameplay pillars are serviceable at best and dull at worst, you know the game has issues. And yet, even so, I have enjoyed my time with this game. Industria is fairly short at around four hours in length, and though I have been left frustrated with its gameplay deficiencies more than a few times, I can’t help but acknowledge its obvious strengths in atmosphere, storytelling, and world-building. My recommendation here comes with some clear and very significant caveats- but it is still a recommendation. As it exists right now, Industria is a very rough but solid experience. With a bit more polish and time in the oven, it could have been so much more.

Final Verdict:
FAIR
Industria is rough around the edges, but its solid world, world-building, and storytelling are still worth experiencing.
A copy of this game was provided by Developer/Publisher/Distributor/PR Agency for review purposes. Click here to know more about our Reviews Policy.