Inside the PlayStation 4: Motherboard Components Explained

We explore the intricacies of the PlayStation 4’s hardware, and look at which functions are tied to which components.

It’s been a few days since the PlayStation 4 was launched in North America and we are sure that technology bluffs are dying to see what’s inside. You may find several PlayStation 4 tear-off articles around the internet but our piece will go even deeper into the PlayStation 4’s architecture, outlying the various components and their respective specifications. So if you’re interested in knowing what lies under the hood of the PS4, then this article might well be for you.

The PlayStation 4 features an 8 core x86-based CPU and 8GB of GDDR5 RAM. The latter has been unanimously praised by developers ever since the PlayStation 4 was revealed back in February this year. This 8GB is split into 16 DRAM modules of 512MB RAM each, 8 surrounding the CPU and the remaining 8 below it. Sony are using Samsung’s K4G41325FC model for RAM which boasts a refresh rate of 16K/32ms per 4GB. Described by Samsung as a fixed and permanently placed memory, K4G41325FC model is known to improve performance of the GPU. The latency in GDDR5 is not particularly high when compared to DDR3. This is because GPUs are designed to be somewhat latency independent so GDDR5’s latency should not be a big deal.

The PlayStation 3 was somewhat handicapped in running two applications at once.  With the PlayStation 4, that’s all set to change. It features Samsung’s K4B2G1646E-BCK0 which is a 2Gb [not Giga Bytes, it is Giga Bits] DDR3 SDRAM secondary chip. This model features transfer rates of up to 2133Mb/sec/pin and is arranged as 16Mbit x 16 I/Os x 8 banks device. This roughly translates into 256MB of DDR3 SDRAM which is simply amazing since the PS3 had the same amount dedicated for video and its OS. 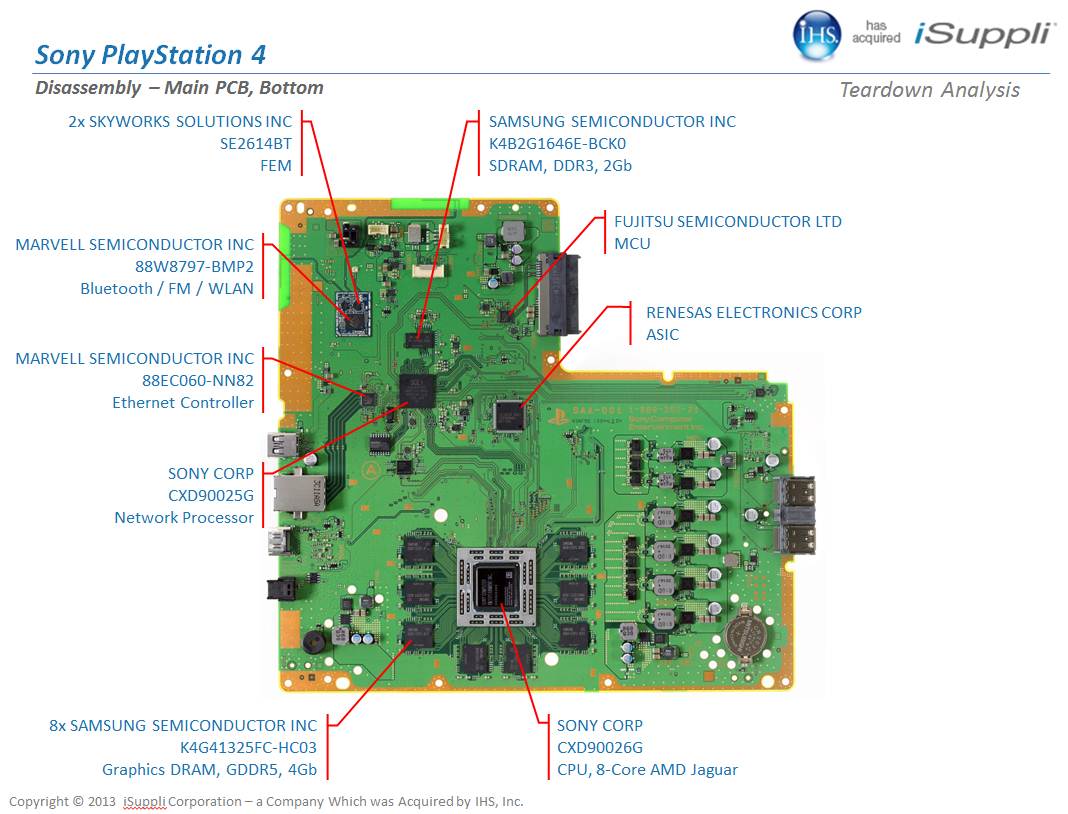 For an in-depth look at the pricing of each component, check out this IHS video tear down of the PS4.

The PlayStation 4 features a Macronix MX25L25635FMI 256Mb Serial Flash Memory. We are not entirely sure of the purpose for this memory, but we believe that this will be used to cache the 15 minute clips recorded and on the fly screenshots captured using the Share button. The PS4 also has two Macronix MX25L1006E CMOS Serial Flash Memory, one on the back of the motherboard and the other near the USB. It is a 1,048,576 bit serial Flash memory arranged as 131,072 x 8 internally.

The PlayStation 4 features a custom built AMD solution for its unified GPU and CPU. Titled as CXD90026G SoC, the die measures 19.0 x 18.3 mm (348 sq mm) which is comparatively bigger than the PlayStation 3. It consists of 20 compute units, two of which are redundant to increase yield, and 1152 shader processors which should place it comparatively between AMD Radeon HD 7850 and 7870. The custom chip uses Taiwan Semiconductor Manufacturing Company’s 28-nm high-k transistors. 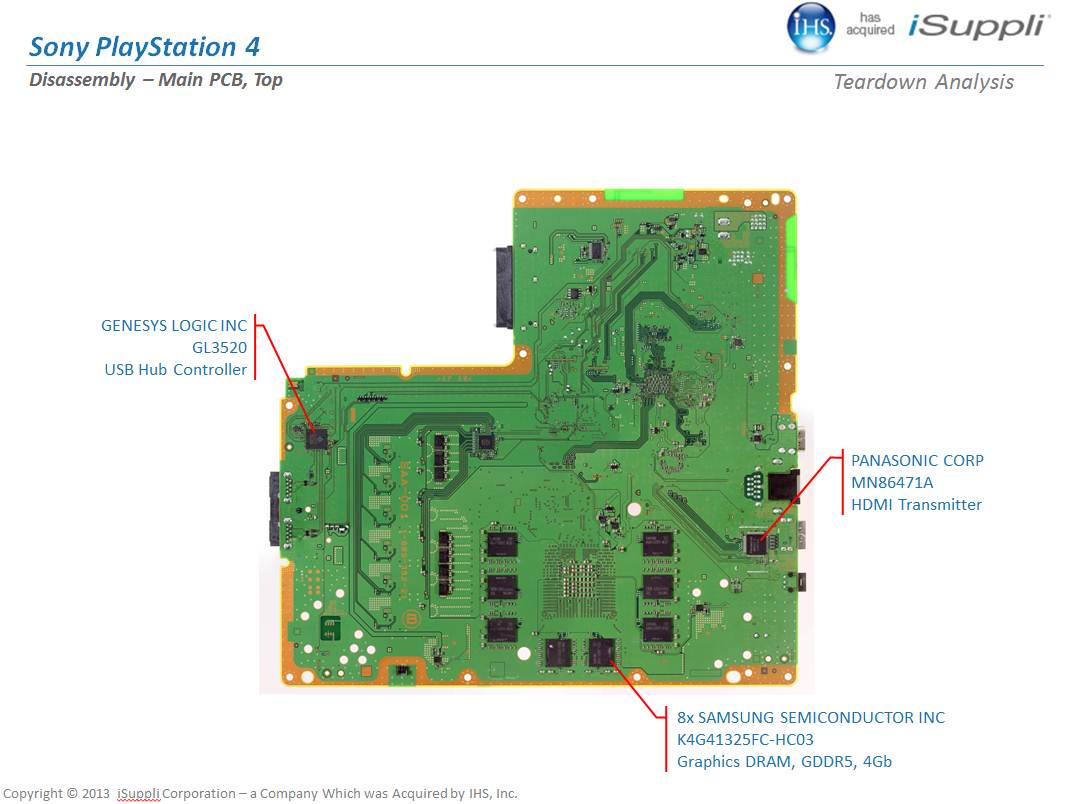 Panasonic MN86471A HDMI Communication LSI which has inbuilt copyright protection with HDCP encoding. This is something that Sony plans to patch later on so gamers will be able to capture in game video footage. Furthermore it features HDCP accelerator and supports uncompressed HD and SD video signals.

Marvell’s Wireless Avastar 88W8797 does the job here. The console also uses Skyworks’ 2614B 315BB, a company that specializes in mobile communication.

The PS4 utilizes a 2.5 inch, 5400 RPM, 500 GB, SATA II from HGST. Some reports indicate that actual usable space is roughly 408 GB though. Users can hence upgrade the HDD to a higher capacity if they wish.

The PS4 will continue to use Blu-ray discs as its primary media. It is capable of reading discs three times faster than the PlayStation 3 and just like its predecessor will be able to playback 16-layer 400 GB discs. Furthermore it consists of four integrated circuits which seem to be control chips of some sorts:

It consists of three fuses:

And the following connectors: 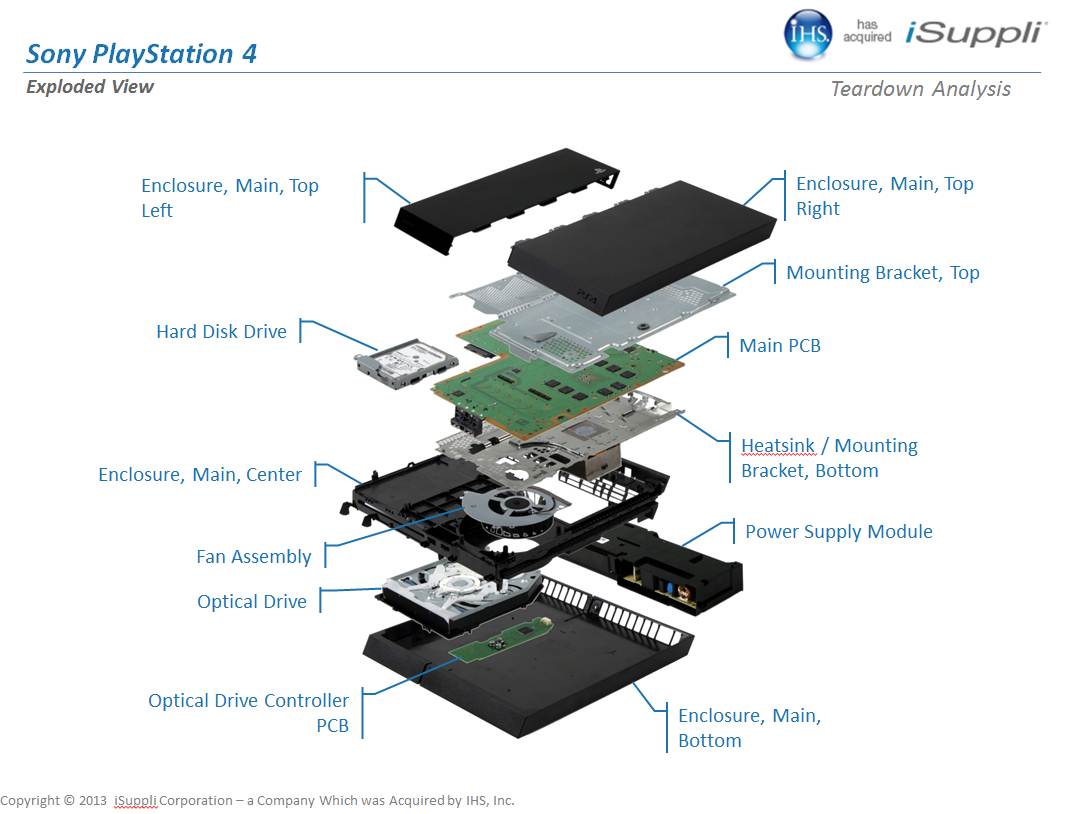 This will maintain the low power state activities of the PlayStation 4. We are assuming that the suspend/resume functionality will be handled by the SCEI CXD90025G processor. It is an application-specific integrated circuit that is intended to do specified intended processes rather than general ones. This chip is custom built by Marvell Technology.

Developed by Delta Electronics Inc, the console uses the KSB0912HE-CK2M model which consumes DC 12V and 1.40A.

The PlayStation 4 uses IDT 6V41265NLG, a custom  clock synthesizer that maintains the communication between the APU and secondary chip.

For an inside look into the Xbox One architecture and motherboard click here.