Inside The Xbox One: Motherboard Components Explained

We explore the intricacies of the Xbox One’s hardware, and look at which functions are tied to which components.

Last Friday the Xbox One was launched across 13 different countries. Combining the best elements of a gaming architecture along with entertainment apps, Microsoft plans to dominate your living area with the Xbox One. Similar to our Inside the PlayStation 4 article, this feature will go deeper than the tear down articles you have seen on the internet. Furthermore we will also outline the various components and their respective specifications.

The Xbox One features 8GB of DDR3 RAM reaching a bandwidth of 68 GB/sec.  This 8GB of RAM is further split into 16 DRAM on the motherboard. Unlike the PlayStation 4, all 16 DRAM units surround the APU. The Xbox One uses the SK HYNIX INC H5TQ4G63AFR-TEC model featuring programmable CAS latency of 5, 6, 7, 8, 9, 10, 11, 13 and 14. This DRAM is capable of synchronous operations for both rising and falling edges of the clock.

Similar to the PlayStation 4, the Xbox One features a custom built APU. Modeled as ‘X887732-001 DG3001FEG84HR’, the CPU has a peak clock speed of 1.75 Ghz. The CPU had an initial speed of 1.6 Ghz but Microsoft bumped it up later. The GPU has 14 compute units out of which 2 are inactive to increase yield and also in case any of the others become faulty at any point. The custom chip uses 28-nanometer-process geometry, again similar to the PlayStation 4.

The Xbox One uses the X861949-005 T6WD5XBG-0003 southbride. A southbridge is essentially a support processor that handles the communication between different components. In this case, the game controller, Kinect, Wi-Fi, HDD and HDMI are some of the components that this bridge handles. 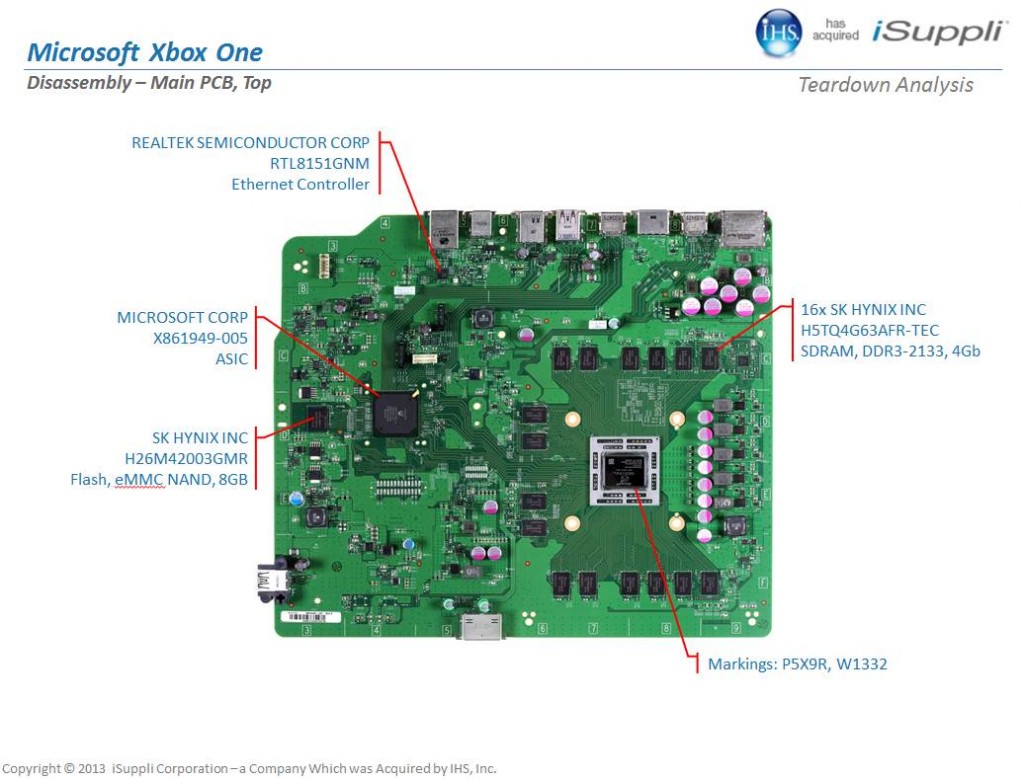 We had reported earlier that the Xbox One has 8GB of NAND Flash Memory. The exact model number is SK Hynix H26M42003GMR 8 GB eMMC NAND Flash. H26M42003GM features a density of 32Gb [gigabits] i.e. 4GB [gigabytes] across two stacks. That makes it 4 GB per stack. Its exact use is currently unknown but being, flash memory, it might be used for app snapping.

The Xbox One uses Realtek’s RTL 8151GNM model for its Ethernet Controller.

The Xbox One uses NCP4204 GAC1328G for managing power requirements to and from the board.

A high current load switch protects the various components on the motherboard in event of a high voltage, hence preventing damage to the console. Microsoft have used industry standard Texas Instruments’ TPS2590  for this purpose. This is ideal for voltage levels varying between 3 V to 20 V.

Note: Architecture image was provided to us by IHS.