The next playable slice, called Running Man, from the critically acclaimed indie first person shooter Interstellar Marines is now available on InterstellarMarines.com for everybody to play.

Zero Point Software invites gamers from all over the world to get immersed even deeper into the story, world and gameplay of the Interstellar Marines games, currently in development. 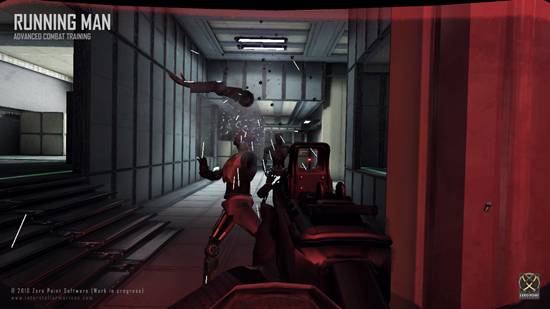 In Running Man players take part of a select group of Special Forces secretly being trained as first line of defense against other sentient species. Deep inside an underground military facility and under the supervision of Drill-Sergeant Barry, players will engage in a series of grueling training programs and fight high-tech Combat Training Robots specially designed for fast paced close quarter combat training.

“In our previous slice, Bullseye, players were confined to a small military shooting range filled with simple cardboard targets. This time players will experience complete freedom of movement and they will need to move fast to survive the waves of charging Training Robots. At the same time Running Man sets a series of events in motion, that eventually will lead to the revelation of the back story of the Interstellar Marines trilogy”, says Kim Haar Jørgensen, Game Director, Zero Point Software.