HD Collections are a bit of a hit and miss affair. Some breathe new life into an ageing game, giving it a nice modern outing with revamped graphics and sound… whereas others are little more than a mediocre title being shoved in a new box and slapped with a modern-day price tag. Fortunately, The Jak and Daxter Trilogy is a prime example of the former.

It seems unbelievable that it’s just over a decade since colourful duo Jak and Daxter first burst onto our screens. The games were once dubbed the best platformers of their generation and it’s clear to see why. No discerning PS3 owner should spurn the opportunity to relive these adventures in all their cartoon-like glory. Each of the games was heaped with praise back then, helping to cement Naughty Dog as an awesome developer and a fan favourite. And boy, can they spin some great stories – the narrative of each of the games is both engrossing and entertaining, and guaranteed to keep you hooked right to the very end. 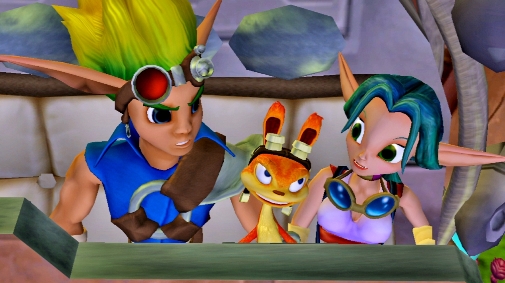 Content-wise, each title is untouched but they have been remastered to include 720p high-definition graphics, so they look nicely upscaled with improved animation and visuals. Trophy support is thrown in for good measure… oh, and there are some 3D options should your television be capable!

The minimalist menu screen offers little more than access to each of the games and a percentage indicator to highlight how much you’ve completed. The first in the series, Jak and Daxter: The Precursor Legacy (originally released in 2001), obviously looks the most dated but stands the test of time remarkably well. The characters are rich and well defined. Samos the Sage is still there – nagging away as ever, as is his daughter (and Jak’s love interest) Keira. There’s the huge world to explore, lots to collect and the all too familiar controls allowing you to double jump, roll and smash stuff with your melee attack. This is platforming at its best.

The first game sees our heroes ignore Samos’ sagely advice and wander to the intriguingly-named Misty Island. It’s here that Daxster accidentally plunges into a vat of Dark Eco and is transformed into his furrier self – an otter/weasel hyrbid – aka an ottsel. Cue the start of the friends’ adventures as they attempt to change Daxter back to his previous form. 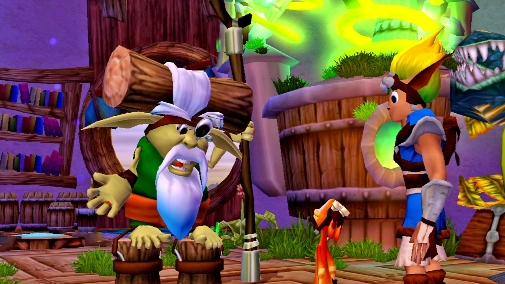 Samos knows what he’s talking about!!!

Put aside the slightly ragged graphics, and the core gameplay is still great. I’d almost forgotten how funny this game was and Daxter – who I’m certain is modelled on a comedic Joe Pesci character – is still really entertaining all these years on.

On to the sequel then, and things get even better. Despite the slightly annoying issue of having to quit out of the game entirely to reload the menu screen to play the next in the series, everything else works smoothly.

Jak II is bigger and better than its predecessor, and its original release two years after the first game really highlights the difference graphics-wise. But in terms of gameplay, there’s so much more to do and loads of variety. It’s really quite different from the first game; it’s been likened more to the Grand Theft series than a tradional platformer! There’s a big new world to roam and plenty to explore and do. Everything’s a little more sinister than the Precursor Legacy. There are vehicles to drive, new guns to wield and Jak – the subject of experiments by Baron Praxis – can morph into a tougher Dark Jak who packs more of a punch. 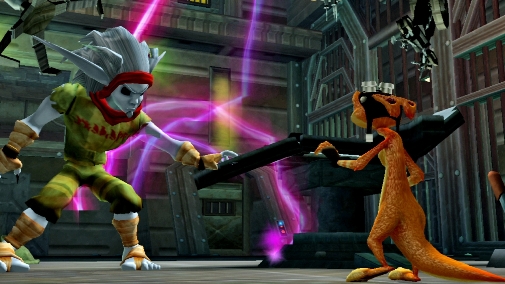 The final offering, Jak 3, is leaps and bounds above the others aesthetically yet retains the same charm and humour of the earlier titles. This time round Jak is banished from the realm, and is left in the middle of nowhere to perish. Fortunately, his trusty sidekick Daxter opts to keep him company – but they’re not alone for long… This is perhaps the most well-rounded of the series and a great game in its own right, making it well worth the outlay alone.

If there’s one thing you can say about Sony, it’s that they certainly don’t consider nostalgia a thing of the past; there are countless games from yesteryear that have been dusted off and re-released on the PS3 and I, for one, am all for it.

I reckon that The Jak and Daxter Trilogy is among the best of these collections, and it’s a must have as much for those who loved the games the first time round as it is for those who have never experienced the duo’s madcap escapades. Recommended!

Nostalgia at its best! Relive some of the greatest games from the PS2 era but with revamped graphics, 3D options and trophy suppoprt

Does look a little dated in places. It's yet another HD collection - do you really want to revisit old games when there's so much decent new content around?

Final Verdict:
SUPERB
Jak and Daxter, two cult heroes among PlayStation fans, retread their first three adventures in an HD update
A copy of this game was provided by Developer/Publisher/Distributor/PR Agency for review purposes. Click here to know more about our Reviews Policy.