Remember Jeremy McGrath’s Supercross franchise that spanned two games over consoles from the Nintendo 64 to the Playstation 2? No, me neither. Either way the world famous supercross star McGrath is back with an XBLA title focused on his new adrenaline fetish; offroad racing.

Offroad offers newcomers to the genre an easy to learn, simple arcade style racer while offering veterans a dumbed down upgrade system to master and three tiers of difficulty. There’s nothing fancy here with McGrath’s latest outing, just pure arcade racing with the odd customizable element in to offer a slight temptation of replaying races in order to earn that all important XP and make your truck that bit more efficient in “Acceleration”. There’s certainly nothing special when it comes to modes to play in Offroad. We have the selection of Arcade, Career and Multiplayer. It’s pretty barebones but then again it’s only 800 Microsoft Points so it’s hardly going to be the next Motorstorm. 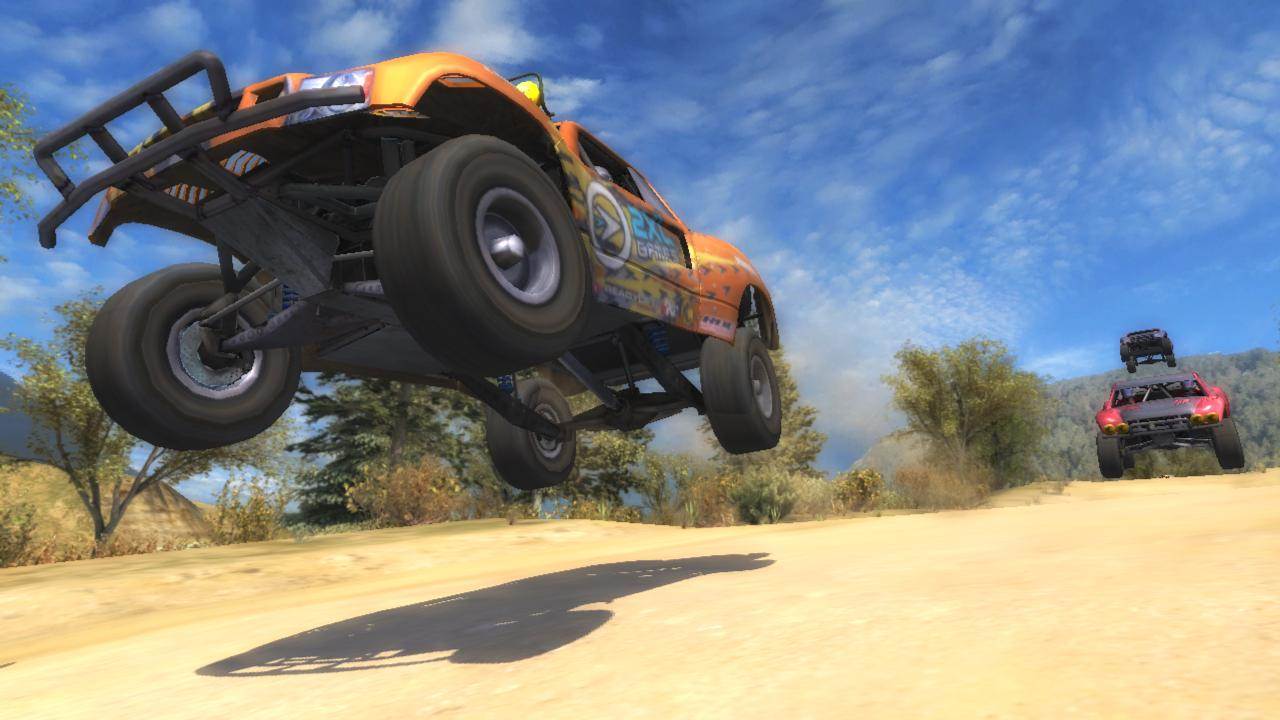 Everything you do in Offroad is rewarded with XP. Take over Hamilton on a tricky corner and you’ll get a slice of XP pie. Everything from risky takeovers, driving certain distance milestones, winning races, powersliding and throwing yourself over a bump in the track will award you with XP. This XP will culminate as you play the career or arcade mode and unlock blocks to use on customizing your vehicles in different categories. Each category has 5 blocks worth of upgrading available and you’re able to store a limit of 5 blocks of upgrades through earning XP. This basically means you’ll find yourself constantly upgrading your vehicles as you play which is a neat touch.

Speaking of vehicles we have different classes to choose ranging from Sportsman Buggies and Rally cars to, as Jeremy McGrath states in the opening tutorial, his personal favourite, Throphy Trucks. It’s a decent incentive to play through all 23 career events in a bid to unlock these different classes however they don’t seem to play all that differently which is strange. I played the same track, the same way in a Prolite Truck than I’d play in a Pro Buggy. There just didn’t seem to be much variation in the way these vehicles handled and the physics involved. 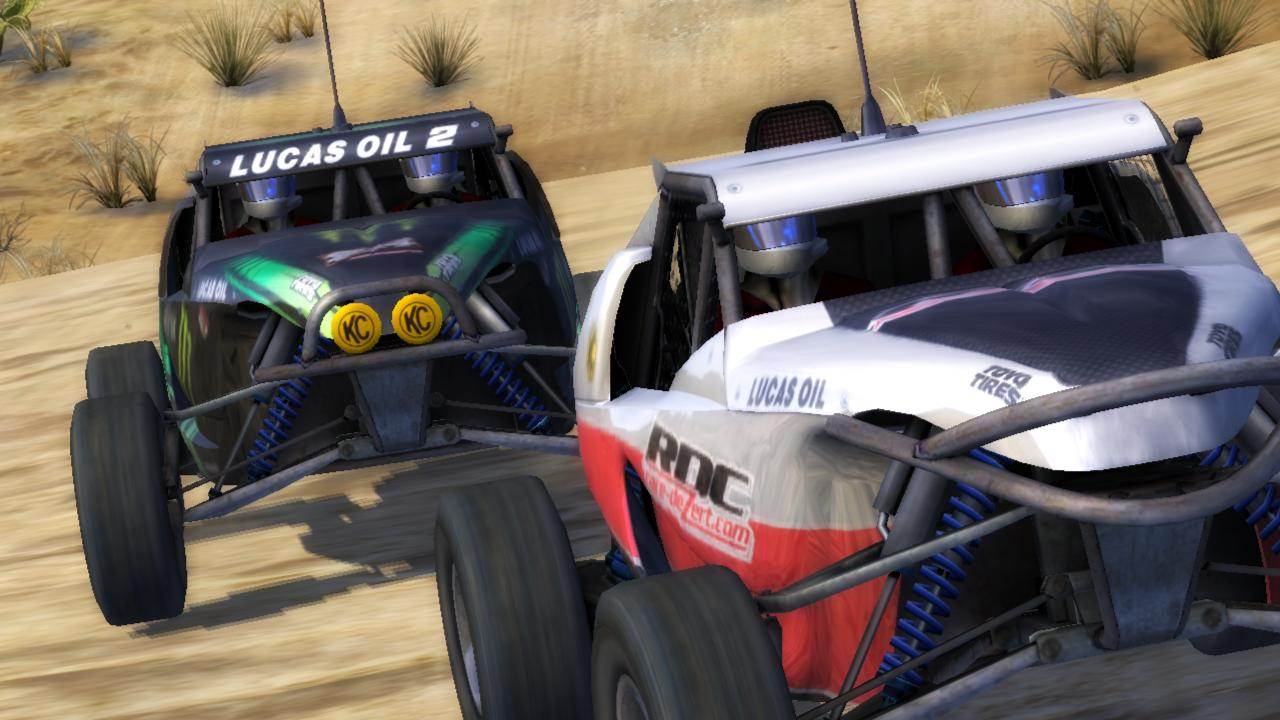 The actual gameplay is very accessible and to an extent fairly fun and satisfying. A beginner could easily pick up and start playing straight away. The vehicles are easy to handle while still providing a challenge to those who want to powerslide round a hairpin turn and fly through the air, landing perfectly after a jump. There’s not enough meat on the gameplay to truly feel like you’re developing a strategy or your own style of play however. It’s simply just cruising through the levels and overtaking the less than challenging AI. The physics felt extremely off during jumps and dips as I would often be practically nose-diving into the ground after airtime but still land on all four wheels like some cat-truck hybrid. It just didn’t feel right. It’s also helpful to have “superstar” Jeremy McGrath yelling every up and coming turn and twist in the course however after 23 races of it you’ll soon be muting his annoying back-seat driving commands and just use the symbols that crop up instead.

The visuals in Offroad are extremely unimpressive and fall fairly flat. Textures look simple and lack depth while the trucks themselves lack detail and look blocky. The backgrounds however add a certain amount of visual flair to an otherwise “ho-hum” looking game with decent forests, fields, snowy mountains and other environments glistening off the beaten track. 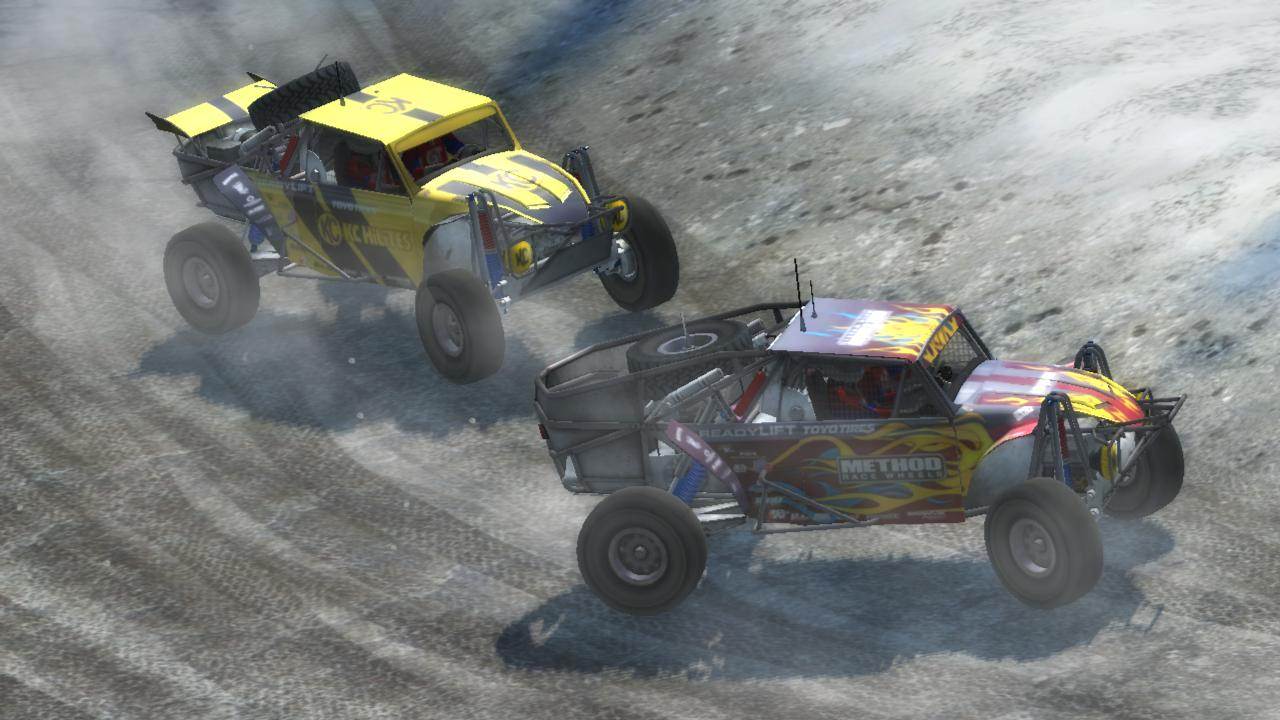 If you’re looking for a fairly cheap and fun racer to play with mates over the weekend this would be it. However deep gameplay and mind-blowing physics aren’t to be found here. Jeremy McGrath’s Offroad is fairly addictive with constant XP incentives to continue playing however once the career is finished and you’re bored of the same 6 tracks there’s not much more worth coming back to.

A no-frills budget offroad racer lacking any real depth but offers a good few fun hours tearing up the tracks in career mode.

A copy of this game was provided by developer/publisher for review purposes. Click here to know more about our Reviews Policy.
Tagged With: D3Publisher, jeremy mcgrath's offroad, pc, ps3, PSN, xbox 360