It is fun to play, and in the end, that is what matters.

As a flood of games hits Apple’s App Store for iOS every week, every time before one clicks on that ‘Buy Now’ button, they must consider if it is really worth it. Yes, often you pay very little for a game, or not at all, but on the App Store more than anywhere else, what you pay is exactly what you get. There is also the fact that the impulse nature of App Store buys means that you often buy a new game for very little, and then never get the urge to actually check it out, confining it to be just one more icon added to the endless list on your home screen.

So yes, when reviewing a game for iOS, considerations such as these must be given weight. Specifically, the questions, ‘does this game do enough to stand out?’ and ‘will I keep returning to it?’ need to be given some weight. On those two fronts, Jewel Factory succeeds, at least partially. A lot of it, I believe, depends on the extent of time you invest into it, and depends on how often you’re able to just launch the game, if only for a couple of minutes, but the game does do enough, at least aesthetically speaking, to make itself stand out from the crowd, and it does have a variety of hooks to have you coming back. 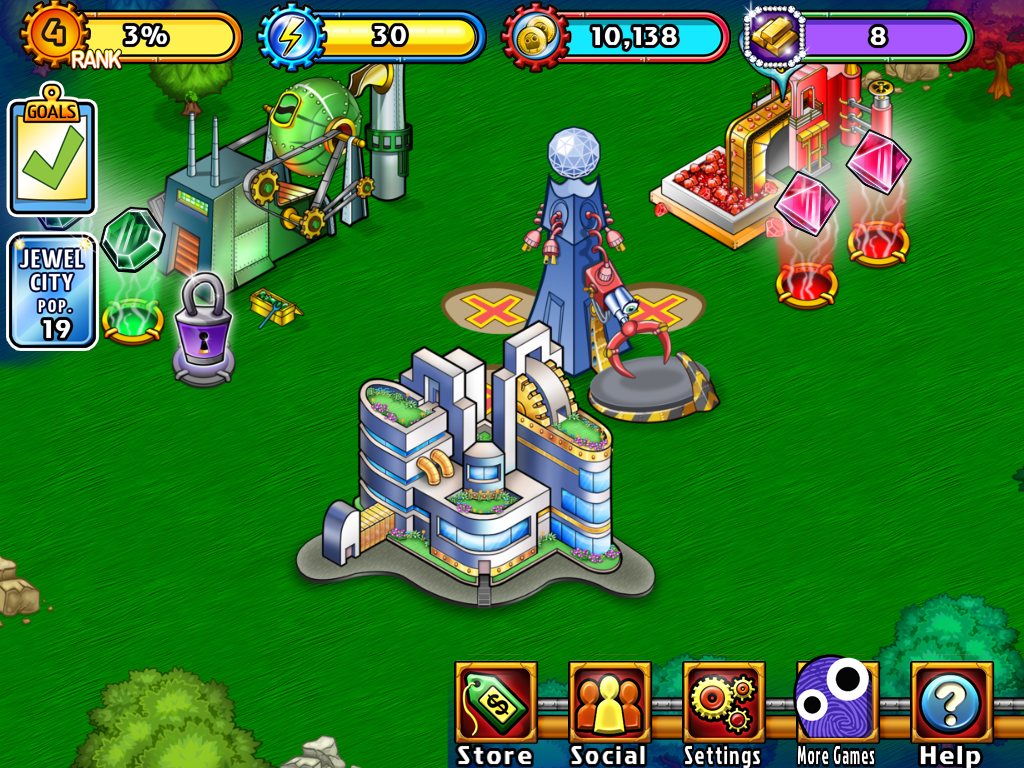 Jewel Factory is a free to play simulation/puzzle game hybrid. That’s the best way to describe it. You’re given some tools, and you’re told to build a city. There’s a degree of resource management here, more than most other similar games on either the App Store or other platforms such as Facebook, and you need to look after not just your Gold and coins, but also look after ‘Jewels,’ which are used to accomplish anything in game, and look after your power consumption. The idea is to create a big, thriving city that attracts as many ‘visitors’ as possible.

You can access some buildings, but some of them are locked. To unlock them, you don’t actually have to ‘pay’ for them, either in terms of real money, or in game money. Jewel Factory adopts a much more honest approach to the entire process, unlocking buildings as you progress ‘levels’ in the game. Progressing levels is a simple question of either meeting the required objectives, or adding buildings to your cities, or decorations, or managing resources. As you grow in Level, more buildings, factories, decorations, and resources are available to you. You still have to buy them using the game’s currency, mind you- spending coins, and stuff. But unlike other free to play games, the price isn’t so unreasonable that the only way to have enough currency is to buy it from the game’s store. It might take some time, but aggregating enough money is completely possible, in game, entirely.. This runs completely counter to how a free to play game is structured, and actually ends up generating some good will towards the game, as it doesn’t feel like the developers are trying to nickel and dime you at every instance *cough* Zynga *cough.*

In game activities often take time, like processing of jewels before they can be used to power a factory, which may take up to five minutes, and you do have the option to pay up and get it done immediately. Although it is possible to earn the ‘currency’ in game, you are best off buying it outright from the game store. So yes, the game does try to steer you towards purchasing, but it is entirely possible to play it without spending much.

So much for the simulation parts of the game. Where does the resource management come in? On a macro level, while you are expected to look at your resource usage every time you lay a building or putting down a factory, or a decoration. However, you also have to power your city using the titular jewels. The game’s cities’ infrastructure is entirely dependent on mining and harvesting the power within jewels like Ruby and Sapphire, so you have to build jewel specific factories, that will generate not only just money for you from time to time, but also open up new upgrading options for your city if you harvest the factories’ resources right. 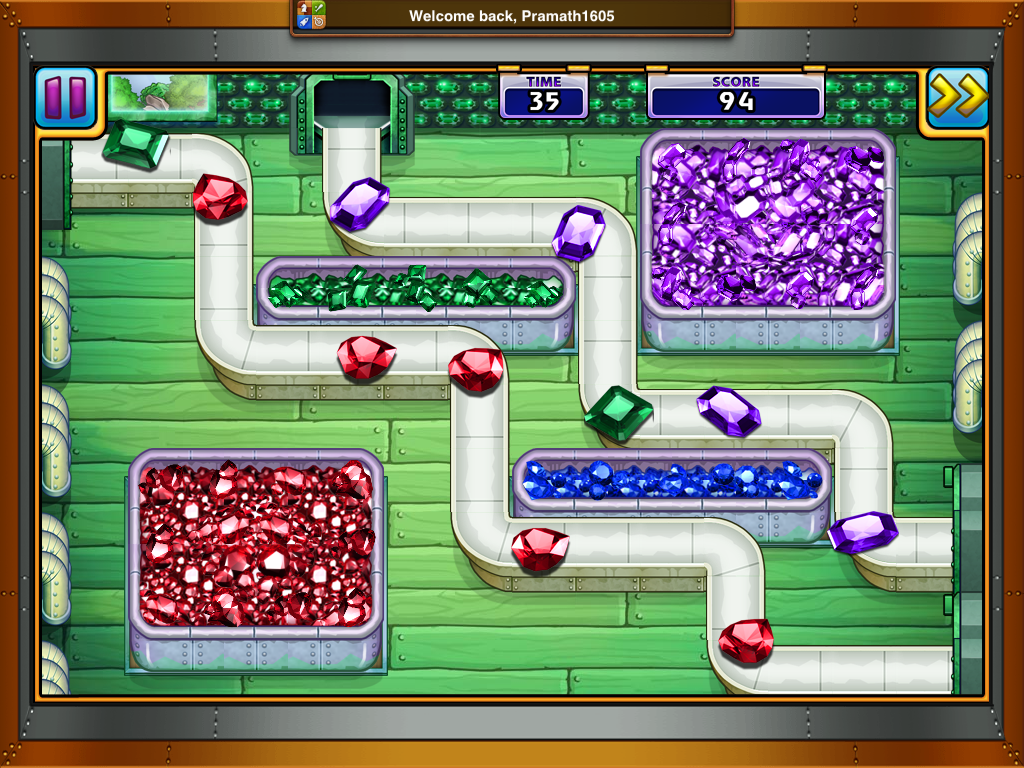 Doing that is actually interesting, and it is where the game’s puzzle aspects come into play. You click on a factory, and you click ‘Play.’ This takes you to inside the factory, to a sort of minigame, where you are expected to take jewels off their assembly lines and take them to their containers. The problem is, the conveyor belts zip out the jewels at top speed, mix it up, there are multiple conveyor belts, and multiple containers. Trying to make sure each jewel enters its container, and only its container, consecutively, so that the stringed combo is not broken, so that you have enough points to meet the objective, is quite hectic, and can actually lead to some of the best moments of the game. It’s the part of the game you probably turn to everytime before class when you have a few moments to kill. The problem is you can’t do it often enough in one go, since doing so uses up power.

Jewel Factory breaks no new grounds. It is essentially taking concepts that exist beforehand, and mixing and mashing them up, all under a new package. However, underneath the wrapping, it is still just a typical iOS city simulator, merged with the typical iOS puzzle game, still trying to make you buy in game gold, still trying to have you keep coming back by offering incentives daily. However, it is honest, it does what it does well, and most importantly, it is fun to play, and in the end, that is what matters.

This game was reviewed for iOS on an iPad 2.

Fun to play, the puzzle parts are really god, deeper resource management than other similar games, the free to play model is well balanced

It's fairly typical, game design sometimes imposes limitations on its best parts i.e., the puzzle portions, if you're to get anything done fast, sometimes you have to pay

Final Verdict:
SUPERB
It plays well, and most importantly, it's fun. You can't go wrong with Jewel Factory.
A copy of this game was provided by Developer/Publisher/Distributor/PR Agency for review purposes. Click here to know more about our Reviews Policy.