Judgment Wiki – Everything You Need To Know About The Game

Everything you need to know about Judgment.

Judgment is an action adventure title developed by Ryu Ga Gotoku Studio and published by Sega. It is set in the same universe as the developer and publisher’s Yakuza series, but acts as a standalone narrative experience.

Judgment is a spinoff of the Yakuza series, also developed by Ryu Ga Gotoku Studio. Though the game is set in the same city as the Yakuza games and is set within the same universe, there are not many narrative threads that connect the two. The developers stated that though there will be some familiar names and locations in Judgment for Yakuza fans, and though the game also uses a lot of the same assets, they wanted it to function as a standalone game and story.

Judgment launched in Japan on December 13, 2018 (in Japan, it launched with the title Judge Eyes), while a worldwide release date was also set for June 25 the following year. However, a few months after its Japanese release, the game faced controversy shortly afterward. Actor Pierre Taki, who had played the role of an important character in the game named Kyohei Hamura and provided his voice and likeness, was arrested for allegations of cocaine possession and use.

As a result, Sega immediately suspended sales for Judgment in Japan, and put the game’s western release on hold. However, the game’s producer, Daisuke Sato state that he would not let the controversies affect the game itself. Sega announced shortly afterward that Pierre Taki’s likeness would be altered for its western release as well as the Japanese version of the game, while his voice would also be replaced in the latter. The release date for Judgment in the west remained unaffected. Meanwhile, Sega also announced that the game would be re-released and resume sales in Japan on July 18 of 2019.

Though Judgment’s sales had been suspended in Japan on March 13 by Sega, the game had already managed to sell through almost its entire stock in the country with three months on the market, owing to strong critical reception upon launch. The developers confirmed that they had no plans for a sequel as of yet. Later, they also confirmed that similar to some recent Yakuza games like Yakuza 0, Yakuza Kiwami, and Yakuza Kiwami 2, Judgment could release on PC through Steam- but that it would depend on how successful the game proves to be and how much demand there is for a PC release.

For its western release, Sega confirmed that Judgment, unlike many previous Yakuza titles, would have a fully localized English dub, in addition to subtitles options in multiple languages. While there would be an English dub though, the localization team decided to translate it to English in a way so as to preserve the inherent Japanese culture in the game and preserve the atmosphere of the world and the characters presented. As such, things such as Japanese honourifics would still appear in the English dub of the game. Sega also confirmed that barring the English audio option, there would be no content changes of censorship in Judgment for its western release.

The developers also confirmed that Judgment’s main story would take 30-35 hours to complete, while side activities and missions could bump the playtime up to as much as 70 hours. 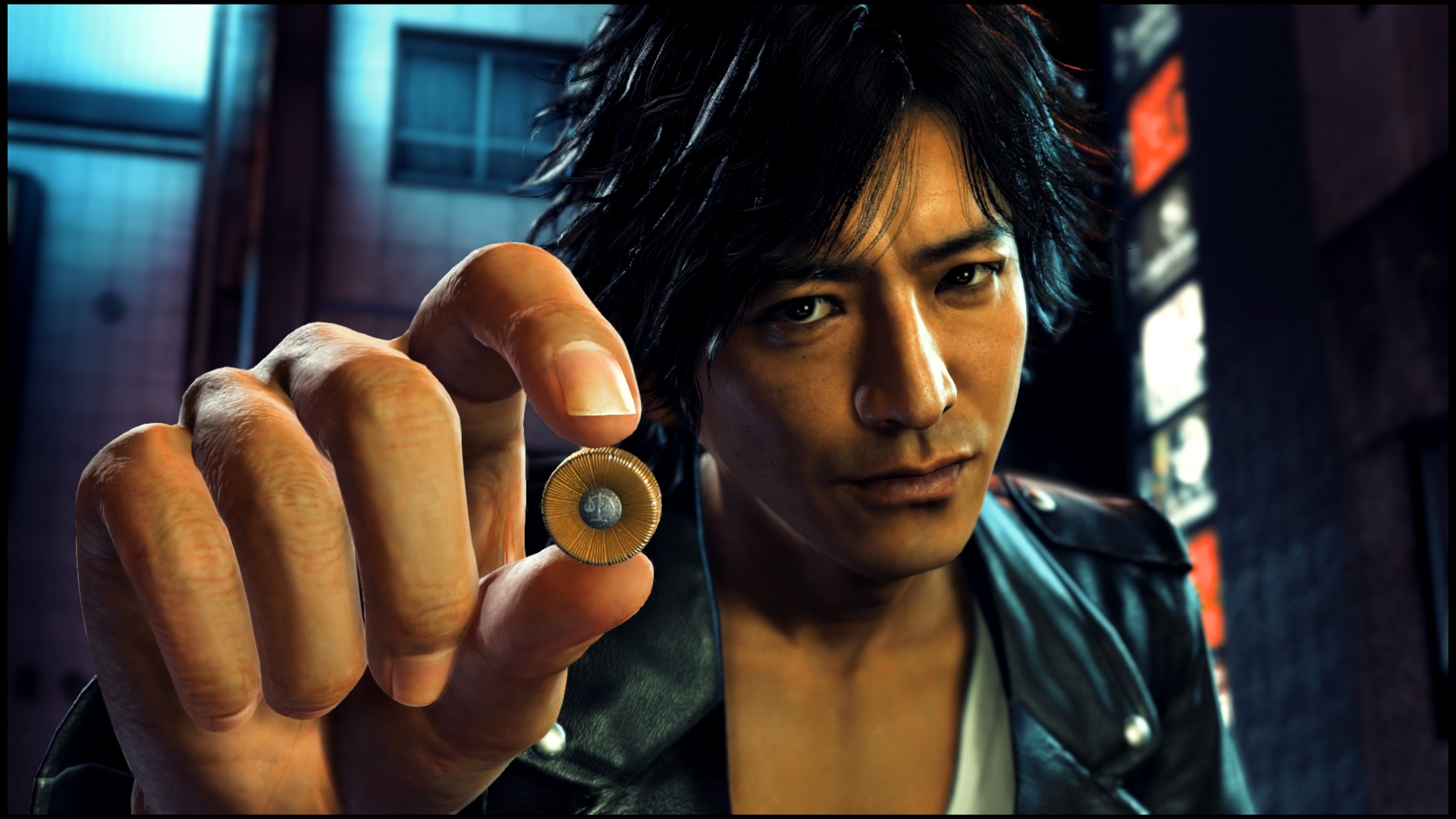 Judgment follows the story of Takayuki Yagami, a former lawyer who swore off his previous profession because of the guilt he harbours owing to a fateful event in his professional past, and is now a private detective. Judgment is set in the fictional Japanese city of Kamurocho, which has also acted as the backdrop for many stories in the Yakuza series. After a string of murders of Yakuza members from the Kansai Clan, Yagami decides to dig deeper, and finds that things are not exactly as they seem.

Judgment is set in the city of Kamurocho, which is open for exploration and houses many side activities. Combat in Judgment works as it does in the Yakuza games, with players being able to switch between two style and being able to use objects and items in the environment during combat as well. Players can also upgrade Yagami by spending skill points to enhance his abilities in combat – such as increasing health or learning new combat moves – as well as abilities that allow him to perform better during investigations – such as being harder to spot while tailing people or being able to spot clues during investigations more easily.

Outside of combat, Judgment also places a great deal of focus on investigations, unlike Yakuza. The player often enters first person mode, where they look for clues to get information regarding cases. Investigations can also entail looking for persons of interest, for which players will have to look at sketches of the people they’re looking for and find the person in their surroundings that matches all the details in the sketch or the description. Yagami also keeps track of all the new information regarding a case – such as evidence and persons of interest – in an app on his phone. The player can use the phone for other purposes as well, such as checking the map, checking progress across all activities, taking pictures and selfies with the camera, or saving the game.

Players also often tail persons of interest or suspects. While tailing people, they can become suspicious of being followed, at which point the player has to break line of sight by hiding in the environment or taking cover. Players can also make use of a drone called Pigeon to get birds eyes views and take pictures. Investigations also entail other mechanics, such as eavesdropping on conversations, or picking locks. Players also often converse with NPCs to get information pertinent to their cases. Often during conversation, players are presented with dialogue options- picking the correct options in the correct order consecutively can net more SP. 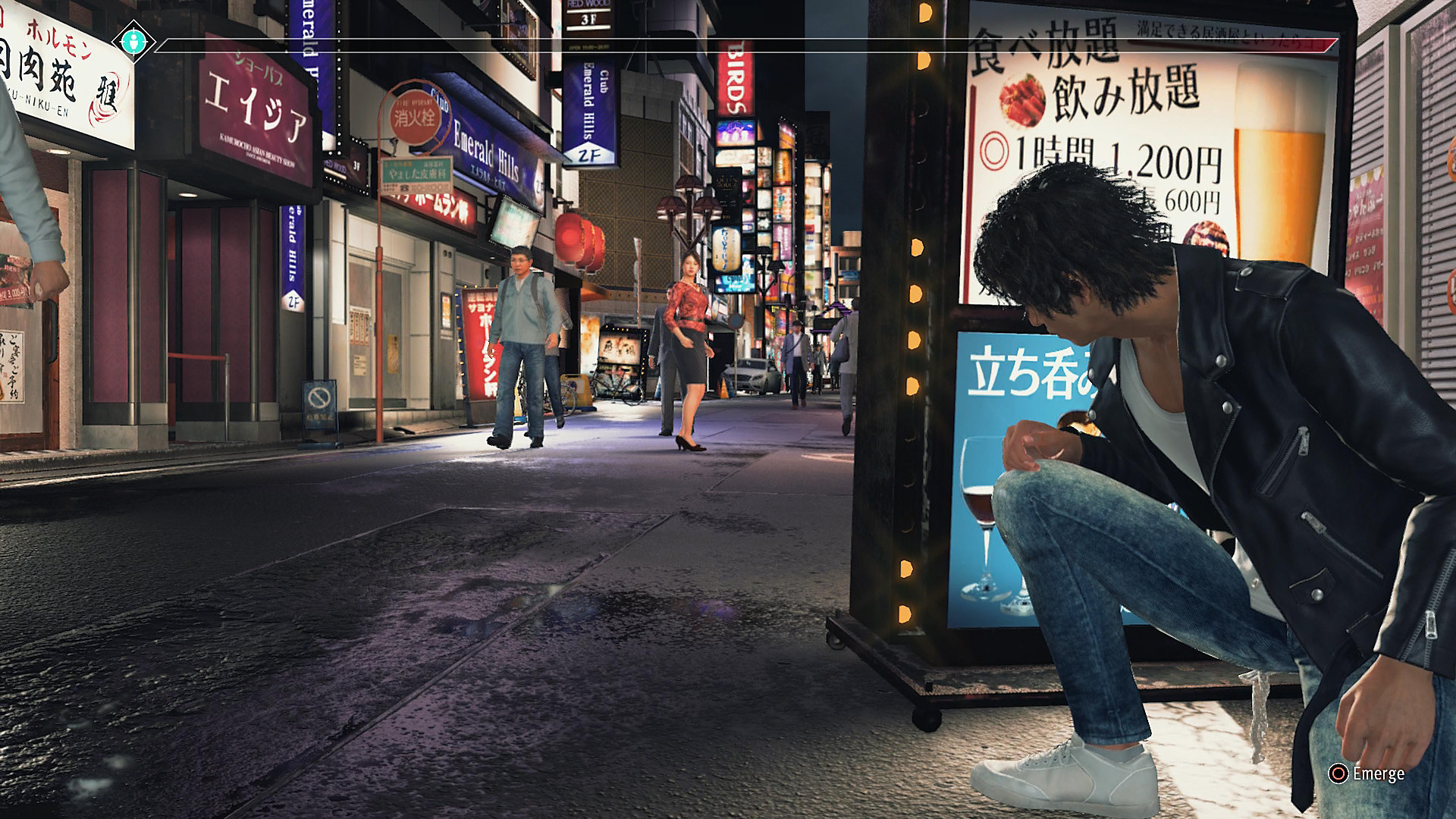 There are also several side activities in Judgment, similar to Yakuza titles. Players can go into restaurants, arcades, and other shops and arcades throughout Kamurocho. Interacting with various characters and shop owners can also open up friendships with them, which can lead to more cases and side missions, and also provide other advantages, such as getting access to secret menus in restaurants.

Yagami also has an office for his private detective practice that serves as a home base. The player often has to head to the office to progress the story, while it houses other side activities as well, such as resting, listening to records, or talking with other select characters. The office also offers limited customization and allows players to purchase and place decorations.