Just Cause 3: Can it be the best open world game yet?

Just Cause is going to be one of those titles that get progressively better as they go. For those of you who have been playing since the first Just Cause, you will know exactly what I’m talking about. The changes that were made from first to second game are absolutely astonishing, yet there is still a lot of work to be done. It’s almost easy to assume that by the time we see Just Cause 3 hit store shelves; it will be the best release to date. Some of the things that need to be worked on though, really need a lot of TLC. They are not up to par with the franchises potential thus far. Let’s have a quick look at what has been, what is, and what may come to be, on the island of Panau.

So you are a huge fan of Just Cause and you support the games as much as you can, but still it goes without saying that there are some things that really need to be fixed. The short and skinny of it is that there are technical bugs and a lack of interesting stories. Many of the missions are quite repetitive and it seems now that Panau has been developed completely and looks amazing, we should be seeing a little more attention to detail in the story. We would really like to see something more than just a few of very similar cut scenes that don’t stimulate our interest in the plot. Just Cause 3 should really focus on making a more cinematic style of game, to really get the player into the mood for how amazing of a world you actually get to explore.

Along with the bad, which we will be sinking farther into shortly, there is a lot of things that Just Cause was able to approve upon releasing the second installment. The most noticeable is the island, and overall world. It is absolutely unrivaled in my opinion, to create a world this beautiful and big, takes a lot of time and designing. That could of course explain why it does lack some of the more important features like good writing and depth filled game play. Going from the first to the second game for a lot of things, was a dramatic improvement, some of which are things that probably should have been corrected before the first game was released, like running animations and a bit of a “shotty” aiming system. The amount of explosions was greatly increased and I’m hoping that it’s taken to the next level for JC3.

The world itself is big enough to have fun in just playing around by your self, and there are plenty of other missions and side quests to do. Looking for upgrades and hidden items is always a good way to spend your time. Not to mention that jumping from vehicle to vehicle is just flat impressive. You can literally just repeat the small things that Just Cause got right and have a pretty good time with the game. It would be nice to see some kind of a merger in styles between Just Cause and Grand Theft Auto, because GTA really has a grasp on putting players in a very likable story and sticky situations. Just imagine this giant world but with all of the choices and alternatives that GTA has to offer.

What can we expect to see as an improvement in the world and landscape? This is a really hard question to answer right now; there is room for improvement it’s just difficult to imagine what kind of innovation there will be. Going from JC to JC2 the number of things that could explode was great increased and of course the graphics got a lot better. We are just hoping that by the time JC3 releases there have been even more updates to maybe have destructible buildings or even landscapes. There are some innovations that can be made to the world, as previously stated its just kind of hard to know what they want to go with as they are on the fence of making or breaking the series with good or bad third game. 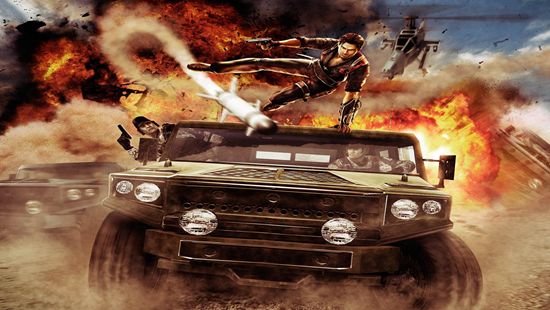 One of the most impressive things that has been implemented into the Just Cause games it the hook and parachute combo. You are out of your mind if you don’t like traveling around like this. Its pretty awesome being able to grapple around the city, so it’s safe to say that if Avalanche Studios got something right it was this, though it won’t keep the series alive on its own. They really need to step up for the third game. What kind of innovations can we see though? The grappling hook and parachute thing isn’t totally possible; this leaves the door open for all types of not so realistic weapons and features.  Not saying I want to see lasers and jetpacks, but it’s not totally impossible that something of this nature may make its way into the long list of weapons and vehicles.

Speaking of vehicles there has already been a lot of stuff made available for us. Jets and boats, cars, motor bikes, and even monster trucks, it makes the mind ponder what could be coming next. Once again hoping that there is some innovation in the story, there may be new vehicles to look forward to, and hopefully they don’t bring back underwater flying with planes. All jokes aside, it would be nice to see some cool ideas come to life here. There isn’t anything particularly that needs to be added but variety doesn’t hurt.

There are a few patterns that need to be addressed when JC3 comes about. For the most part it’s the buggy game play and the story isn’t quite there. To break these patterns there needs to be a lot of focus on how the game actually feels and make sure that it’s nice and smooth.  Don’t get me wrong JC2 fixed a lot of what was looking terrible, but there is still a whole bunch of room for better physics and animations. Sound has never really been too big of an issue really; most of the voice acting is standard for a B movie, which is typically a hit game.

So overall I think that whenever it may be that Just Cause 3 has an official release date, we can expect to see some pretty big improvements. It’s pretty safe to say that what ever other open world games are around at the time will probably have a lot of competition. There is always Red Dead, GTA, and Assassins Creed. Will Just Cause have what it takes to secure the number one spot? I suppose we will have just to wait and see.  Right now there is no talk about a release date for Just Cause 3.