Just Cause 3 is one of those few games that begins with a bang and ends with a boom. If you are one of those players that enjoys all the killing, revels in taking down enemy bases with literally tons of explosions and blowing up stuff Michael Bay style, then Just Cause 3 is a game that will quench your thirst for destruction. It provides the player with all the over the top tools, the downright crazy weapons, and the freedom of choice to make the fictional Mediterranean their very own destruction playground.

Taking place 7 years after Just Cause 2, our over the top hero who re-defines the definition of badassery, Rico Rodriguez, has left The Agency to return to his homeland. Rico would need to liberate the island from dictator General Di Ravello, who is like your generic enemy, aiming to take control of the world. I won’t spoil the story, but let me tell you right away that you are not going to play Just Cause 3 for it. This has always been the case with the franchise, which places emphasis on its gameplay rather than its loosely told story via loosely tied characters. However, some of the dialog is curiously humorous, and I must admit that Rico  Rodriguez is a likable and a genuinely funny guy. I may put him right besides Nathan Drake for his constant chatter about taking enemies down, or cracking jokes which can put a smile on your face. But other than Rico, the cast is pretty much forgettable and the narrative has no emotional bonding with the player. But honestly speaking, this is a Just Cause game…why would anyone care about its story anyways?

"Gear Mods can be used for a wide variety of purposes such as improving your aim, adding nitrous oxide boosts to vehicles, improving damage resistance, and enhancing the tether strength of the grappling hook."

The beauty of Just Cause 3 lies in its tightly woven gameplay, which gives players an indomitable amount of freedom to wreak destruction and havoc on the denizens of the island. If you have played Just Cause 2, you will feel right at home with Just Cause 3. The grappling hook returns along with the ability to quickly travel short distances via Rico’s legendary parachute (I wonder how he uses it in an instant!).  Just like in its predecessor, you can do some crazy stuff using the grappling hook. Attach a random NPC to a vehicle for fun? Check. Attach a car to your helicopter and drop it on your enemy base? Check. Attach an explosive cylinder to the back of a soldier and see him shot miles in the  air? Check. Suffice it to say, the grappling hook is back with a bang.

At its core, Just Cause 3 is true to its essence of causing mayhem and causing as much as ruin as possible. The game is all about taking down helicopters, loud-speakers, fuel tanks, satellites dishes and enemy fortresses in the craziest ways possible. While causing destruction could be as simple as roaming around with a rocket launcher and firing like a mad man, the game encourages you to think out of the box. This is where Gear Mods come into focus. Gear Mods are essentially upgrades to your arsenal of weapons, items and, vehicles. Consider the case of a grenade- you can now upgrade it to a homing grenade which automatically seeks out enemies.

Earn enough Gears and you can upgrade it seek out Chaos objects, making destruction much easier to achieve. Gear Mods can be used for a wide variety of purposes such as improving your aim, adding nitrous oxide boosts to vehicles, improving damage resistance, and enhancing the tether strength of the grappling hook.  The best among these upgrades is one where the GE-64 explosives become rocket engines, which can then be attached to a vehicle’s rear. Now just imagine what you can do with such an ability- take the vehicle on a cliff and send it off crashing into an enemy base, inflicting massive damage. This is the kind of thing where the game excels in providing the player with an almost unimaginable amount of freedom. 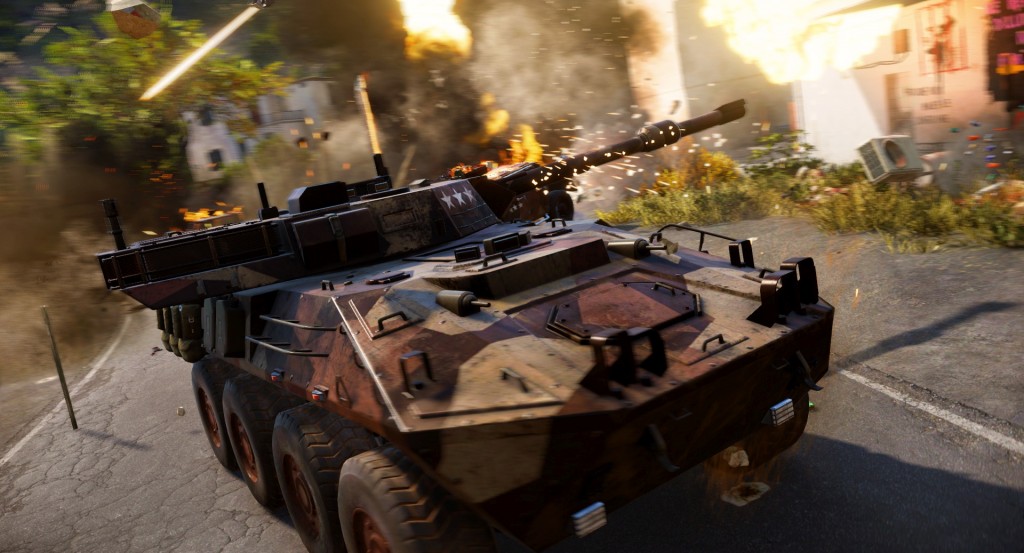 "The game looks like a treat, especially when traversing through sunflower or lavender gardens, not to mention the highly detailed draw distance and the massive map which ensures that Just Cause 3 can be quite a looker at times."

The world is also littered with a ton of side actives and challenges, such as helping someone get their boat into water, helping a rebel escape against enemies, competing in vehicle sprints, flying a plane or wingsuit through a series of rings to earn bonus chaos points, Star Fox style, and more. Although, these activities may get a little bland after a while due to the repetition, they reward players with Gears, which can then be used to unlock Gear Mods. At the very least, side challenges and events are rewarding and I believe most players will likely engage with them due to the reward on offer.

Just Cause 3 was expected to be a world filled with lively and vivid colors, thanks to just how colorful Just Cause 2 was. Fortunately, Avalanche Studios does not disappoint. The game looks like a treat, especially when traversing through sunflower or lavender gardens, not to mention the highly detailed draw distance and the massive map which ensures that Just Cause 3 can be quite a looker at times. Nonetheless, on the technical side of things, Just Cause 3 suffers from some performance issues. I could easily observe that the game engine was under continuous stress to hit the 30fps mark, specially during the heavy explosion sequences where the game was clearly dropping frames. And don’t let me begin talking about the loading times…they are downright awful. Hopefully Avalanche Studios will tune it up in a future patch. On the whole, though, the game is definitely playable. I also did not came across any glitches or bugs in my plathrough, so that is a big plus. 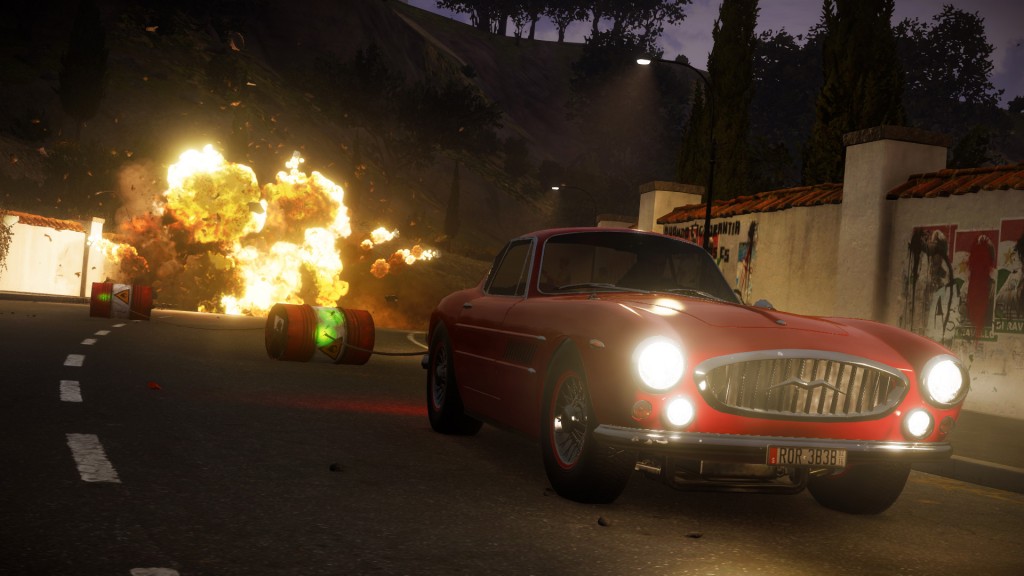 "The game also draws several similarities with the Far Cry series, such as in its activities involving the capturing of outposts and conquering of areas. All of these are mixed with the several destruction missions, but at times I felt like I was playing a Far Cry game in third person view."

My biggest gripe with Just Cause 3 is that fast travel is locked behind collecting Flares [which you earn after doing in-game activities]. If you run out of Flares, you have to manually travel across the map. This annoying, especially when those areas are already those which I have conquered. The game also draws several similarities with the Far Cry series, such as in its activities involving the capturing of outposts and conquering of areas. All of these are mixed with the several destruction missions, but at times I felt like I was playing a Far Cry game in third person view. Fortunately, these thoughts were short lived due to the game’s creative freedom on offer. The mission structure is also questionable with some quests getting unlocked only after the player has unlocked a set number of provinces. Some of these design choices are questionable and put the player in a tight space which is at odds with the freedom the game otherwise provides the player.

At the end of the day, these minor issues may come in the way of what is a mind-boggling experience at times. But if you want to step back from experiencing open world games that have a serious tone (such as The Witcher 3: Wild Hunt and Metal Gear Solid V: The Phantom Pain), then you would do very well playing Just Cause 3 and fight for the just cause instead.

Detailed environment and visuals, Gears Mods adds a new destruction layer, freedom to carry out creative mayhem, tons of side challenges and activities.

Just Cause 3 stays true to the series' core offerings, providing the player a ridiculous amount of firepower and tools to take down their enemies in the most action-filled, over the top creative fashion which would make even Michael Bay proud.

A copy of this game was provided by developer/publisher for review purposes. Click here to know more about our Reviews Policy.
Tagged With: Avalanche Studios, just cause 3, pc, ps4, Xbox One