Sports compilations are well designed for the motion control paradigm. With a wealth of games already invented for you to digitize, it is an easy way to demonstrate the versatility of your motion controller with as little effort as possible. This is however a needlessly cynical viewpoint as, no matter which way you think about it, some of the sports packages we’ve seen on the modern generation of motion controlled consoles have been the most fun I’ve had with gaming in a while. Let me go on record saying that Kinect sports continues this trend, and if you stick it in a room with a bunch of friends the fun is unlikely to run out any time soon.

The package consists of six sports: Football, Bowling, Boxing, Volleyball, Table Tennis and five track and field events. All of the games have their own charm and generally feel very responsive in their use of the Kinect motion sensor. The bowling and boxing are probably the weakest of the events on account of a general monotonous nature. There isn’t anything particularly wrong with the way the games play, in fact I’d honestly be more inclined just to blame the fact that bowling and boxing are quite repetitive as sports in general (sacrilege I know.) Apart from these two getting boring after a while, the games are generally fantastic. The motion controls respond absolutely perfectly. Even though there is a fractional lag as was the concern prior to the Kinect’s release, this actually has little impact on the enjoyment you’ll have while playing Kinect Sports. 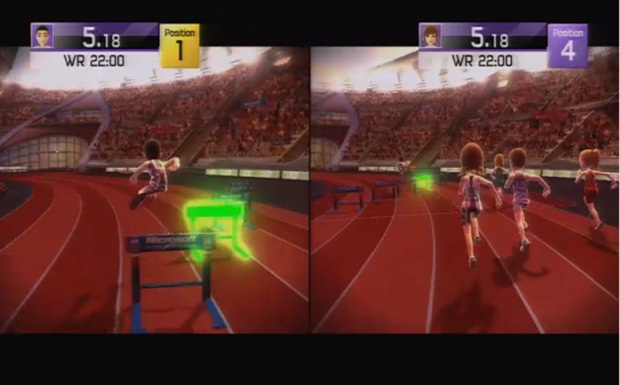 This how all games should be played. In glorious split screen

The other four games are real quality entertainment and, provided you get some buddies involved, are just pure and simple fun. No two ways about it. You also have the ability to play most of the sports either competitively or cooperatively, both locally and over xbox live (in most of the cases anyway.) Playing volleyball in co-op and setting each other up is a definite highlight, and the grudge matches you can form in football and table tennis are noteworthy. What really separates Kinect Sports from competing titles in the genre is it’s ability to track your whole body. Sports such as football and volleyball wouldn’t be possible in the same way without it, and the ability to move your character around in table tennis really adds a new dynamic to the sport. It must also be noted the deceptive nature of the track and field game, which houses five games within it as separate events. This one was the most demeaning of the sports, but there was no doubt that a whole lot of laughter filled the room when we were all done. The actual on the spot running required in hurdles and sprint was much more fun than I thought, and was really good exercise to boot. 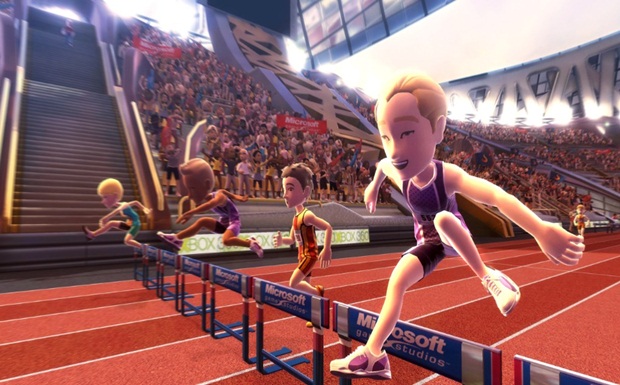 They went for a simple cartoon graphic style to acomodate the avatars, but they could have tried a bit harder

Once you get done with the main events you’ll be dazzled by the variety of mini-games that deviate from the standard sport formula. They are all related to the main sporting events in some way, but are different enough to keep the proceedings fresh and exciting. You can also play several of these games in turns as teams in the party mode, which is a great way to get more than two people involved in the multiplayer shenanigans. As you play all these modes you gain experience points that level you up over time. In earnest the levels are just numbers and have absolutely no bearing on the game’s mechanics, but they help add a necessary sense of progression.

Though the game itself is solid, I was somewhat disappointed with the flippant aesthetic values of Kinect Sports. The sound is generally solid as, even if the commentators are quite irritatingly voiced, there are a wealth of licensed tracks that really add a sense of immersion to your victories. I don’t know who decided to play Chariot of Fire during victorious moments in the track and field games, but he deserves a promotion. 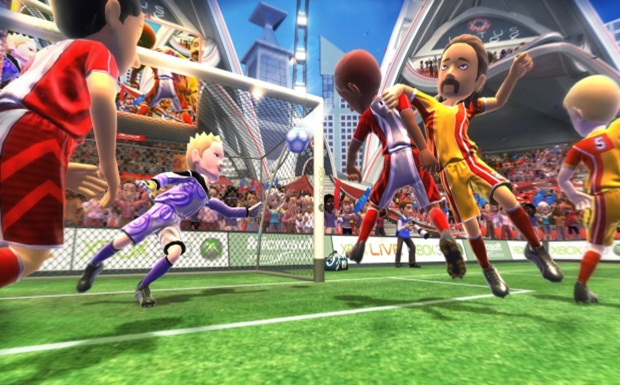 Possibly one of my only hands down issues with the game is the potential replay value of it all. Kinect Sports is certainly the kind of game you can play over and over but, with some of the games lacking much depth, it is a concern that things might get too boring too quickly. It certainly is a concern but, if we’re being honest, this is the kind of game that you’ll always play with friends. As a result of this you’ll find that every new player you bring to the game adds a new dynamic of fun to the package that makes it well worth the asking price. Now if you’ll excuse me some of my buddies need to be schooled at table tennis…

Good variety of games, Pure and simple fun, Great use of motion controllers, Is awesome when played with a group, Good use of licensed songs, Levelling system increases sense of progression

Some events are potentially lacking in depth, Can get repetitive when playing solo, Graphics could have been more ambitious

Final Verdict:
SUPERB
The official sports package of Microsoft's Kinect does exactly what it says on the tin: It provides some awesome sports mini-games that make it perfect for party play, all whilst showing off exactly Microsoft's brand new hardware can do
A copy of this game was provided by Developer/Publisher/Distributor/PR Agency for review purposes. Click here to know more about our Reviews Policy.