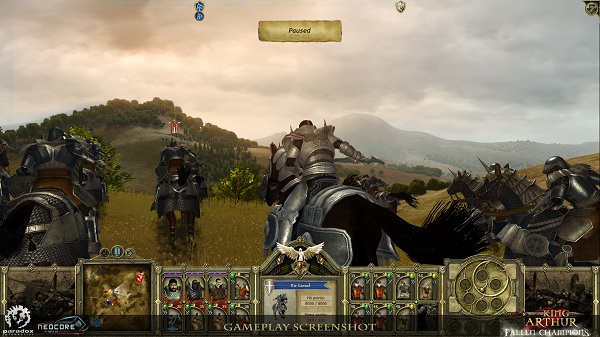 Designed to link the previous game and the upcoming King Arthur 2, Fallen Champions is a stand alone title that will retail at the generous price of $9.99.

According to the press release: “King Arthur: Fallen Champions features the story of three brave souls – a knight, an enchantress – who venture through uncharted lands beyond the Forest of Bedegraine in fulfillment of their individual quests.
Sir Lionel, a brave knight from Britannia, is on a quest to rescue a damsel in distress. Lady Corrigan of the Sidhe, an enchantress of the twilight, is seeking the secret pathways that will lead her back to her lost home of Tir na nOg.”

Features:
– Follow three unique heroes, each with their own storyline featuring adventure quests and epic fights. The fates of these three heroes are intertwined, and their quests lead up to one massive battle under extraordinary circumstances.
– A variety of battle types fought on unique, beautifully crafted battlemaps, ranging from smaller tactical skirmishes to grand engagements against superior numbers.
– A dark and gripping fantasy tale that bridges the gap between King Arthur and King Arthur II, set in an ancient region of Britannia, beyond the well-known territories of King Arthur – The Role-playing Wargame.

Fans seem to have a fleshed out and moderately priced medieval romp to look forward to.