Kung Fu Panda Showdown of Legendary Legends Interview: A Legend in the Making?

The rotund kung fu master and his friends will be returning in Vicious Cycle’s upcoming fighter.

Kung Fu Panda: Showdown of Legendary Legends may not rise to the top of many wishlists this Holiday season but there’s plenty of reason to be excited. On top of releasing for a number of platforms, it will help re-introduce the world of Kung Fu Panda en route to the next big film in the trilogy. In fact, it even features some characters from the third film like Mei Mei so this effectively allows a look into what kind of fighting styles you can expect.

GamingBolt had a chance to speak developer Vicious Cycle about the experience of developing Kung Fu Panda: Showdown of Legendary Legends including how it fits into the current continuity, the types of fighting game mechanics it looks to incorporate and much more. 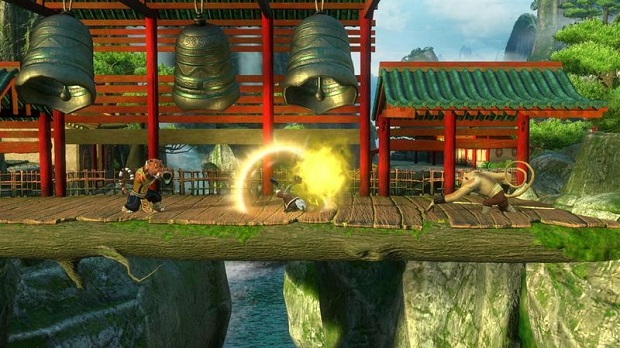 "I am a huge fighting game fan, so we took inspiration from all over the place. Street Fighter, Naruto Ultimate Ninja Storm, BlazBlue, and Playstation All-Stars were all referenced, but we definitely looked at Super Smash Bros. more than any other title."

Rashid K. Sayed: There’s still a lot we don’t know about Kung Fu Panda: Showdown of Legendary Legends, including the final roster. Who else will be featured in the game and how do you maintain continuity with the universe’s canon in the process?

Brandon: The roster has all your favorites from the Kung Fu Panda movie franchise. Of course you are going to see Po and some members of the Furious Five, but who would they fight without some of the Kung Fu Panda classic villains? This means series antagonists such as Shen and Tai Lung also make appearances. As far as continuity is concerned we were given some liberties in order to round out the roster so the player can experience other characters fans know and love!

Rashid K. Sayed: Which fighting games served as an inspiration for the mechanics of Kung Fu Panda: Showdown of Legendary Legends? Is it more Street Fighter or Super Smash Bros. or does it introduce its own unique mechanics in the process?

Brandon: I am a huge fighting game fan, so we took inspiration from all over the place. Street Fighter, Naruto Ultimate Ninja Storm, BlazBlue, and Playstation All-Stars were all referenced, but we definitely looked at Super Smash Bros. more than any other title. I think gamers will be able to pick up our game and be comfortable and familiar with the feel of the gameplay. That being said, this is a different beast. When people get in and experience the speed of the game, the new strategies and competitive play, and the unique move-sets we’ve designed to fit the characters of the KFP franchise, our game will stand on its own compared to other fighters.

Rashid K. Sayed: When it comes to cross-generational development, what kind of obstacles have you faced?

Eric Peterson: One of the hurdles we encounter during cross-platform development is preparing different assets for all of the possible systems.

Unlike gameplay code which rarely changes from system to system and is practically identical on all hardware, the graphics (i.e. models, textures, lighting, shaders, particles, and so on) usually need to be altered or downsized. And in some cases code pertaining to the graphics needs to be optimized depending on each system’s performance capabilities (i.e. resolution, framerate, networking, etc.).

For example, whereas dynamic lighting works great on the PS4, you need to go with baked lighting on previous generation systems. Or you might incorporate robust triangle count meshes on higher end systems, but be forced to go with a reduced tri count for those same models on the 3DS. The same issues apply to shaders, post effects, full-screen effects, and so on. There are a lot of technical challenges to overcome when it comes to the visual elements of the game.

Therefore, you have to do what is best for the game in each case while still maintaining the highest quality bar for each system. 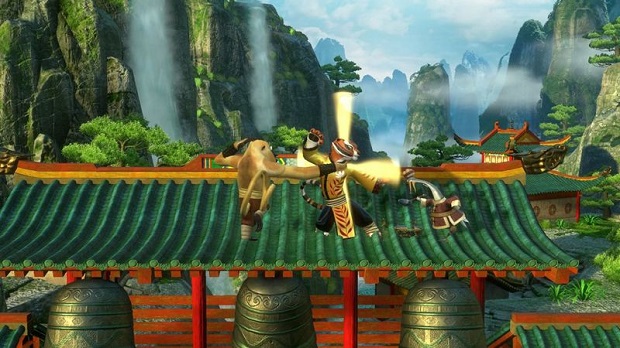 "There is not a collectible grind in Kung Fu Panda: Showdown of Legendary Legends, mostly because we wanted our focus to be on making solid mechanics and game modes. If you have a fun, competitive, and engaging fighting game the replay value is built in."

Rashid K. Sayed: With Kung Fu Panda: Showdown of Legendary Legends releasing so close to the third film in the series, are there any tie-ins we can expect?

Brandon: Showdown definitely has some Kung Fu Panda 3 influence, including locations and characters from the film. For example, the hilarious Mei Mei – sure to be a fan favorite when the film is released – is one of the available fighters. Although we can’t get too specific at this point, there will be a number of new characters and locations from the film included in the game.

Brandon: We have the Tournament of Legends where players can choose Good or Evil and fight it out to be the best. Every character has a rival blocking their path and must defeat a Legendary Kung Fu Master to stand alone as the best!

There is not a collectible grind in Kung Fu Panda: Showdown of Legendary Legends, mostly because we wanted our focus to be on making solid mechanics and game modes. If you have a fun, competitive, and engaging fighting game the replay value is built in. Challenging friends, climbing the online leaderboards, and setting up local tournaments are all great ways to continue your experience long after clearing the single player mode.

Rashid K. Sayed: What has it been like to work on this kind of property with DreamWorks? How did the collaboration come about and how will fans connect to Kung Fu Panda: Showdown of Legendary Legends?

Eric Peterson: We have collaborated with DreamWorks on numerous licensed movie titles over the years; this game is actually the fourth product we have worked on with them! The long-term relationship we have had with DreamWorks dates back 10 years or so now, and we are honored and fortunate to have partnered with them on so many great licenses.

As you may know, there have been a few Kung Fu Panda games in the past, even one for the Kinect. We didn’t have anything to do with the previous titles, but after seeing the types of products that were developed we felt the natural progression for the license was to enter the fighting genre. It was really a perfect fit. 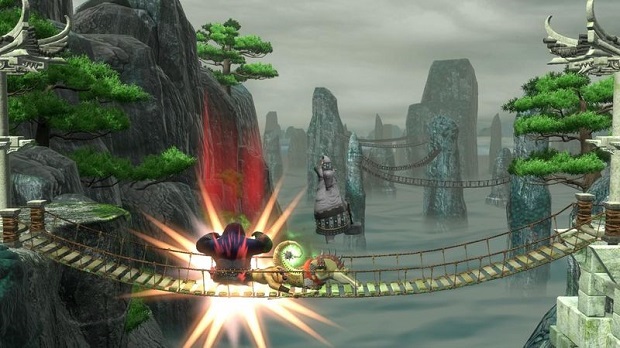 "There are a few differences in the visuals and performance across systems, but you can still expect every character and level to be included in all versions."

Rashid K. Sayed: The online multiplayer market for fighting games has become fairly crowded in recent times. What will Kung Fu Panda: Showdown of Legendary Legends do to stand out?

Brandon: There are a lot of online fighting games. Almost any fighting game released these days needs the online element to compete. What we do to stand out is offer the player more options. Instead of simply being able to play a Timed or Stock match, with or without items, teams or individual, we offer the entire lineup you see in our offline versus mode. This gives the online community the choice as to how play instead of forcing them into a game mode that might not match the play style they prefer. We really put a focus on what would give the fans the most for their money and let them experience every aspect of Kung Fu Panda: Showdown of Legendary Legends the way they chose to play.

Rashid K. Sayed: Will there be any other modes beyond Vs., Team Battle and the Tournament of Legends mode?

Brandon: We have quite a few Versus Game Modes to choose from, each of which is available both online and off. Each mode can also be experienced by playing a 4-player free-for-all or as teams. For example, we have Kung Fu Hill, which is inspired by King of the Hill, and we also have King of Kung Fu, which is inspired by Oddball. These are unique to a fighting game like this and are normally only seen in shooters. Both require techniques that will make fighting game players think differently about their strategies than in the gameplay modes normally found in the genre.

Rashid K. Sayed: What different features can we expect across various versions of the game? Will you implement GamePad controls for the Wii U and will the portable versions see any major differences?

Brandon: There really are not many differences across the consoles and Steam. We concentrated our efforts on making features that would benefit every system equally. There are a few differences in the visuals and performance across systems, but you can still expect every character and level to be included in all versions.

Rashid K. Sayed: Talking about the PS4 version, did you face any issues due to GDDR5’s latency?

Eric Peterson: Like many other developers who have been asked this question, we haven’t encountered any latency issues regarding the GDDR5 memory. 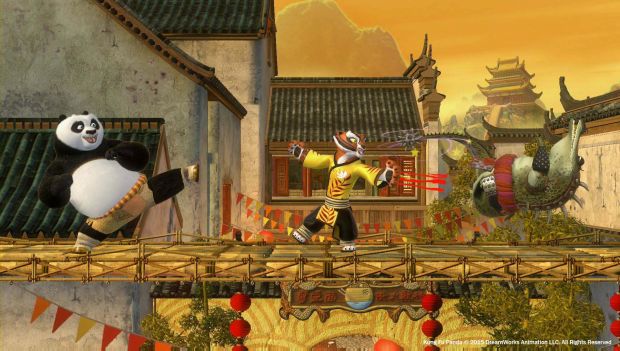 "Parents and kids can play together and have a great time, while the hardest of the hardcore can build a tournament community around it."

Rashid K. Sayed: What is your take on DirectX 12? How far do you think it will improve games visuals and development on Xbox One and PC?

Eric Peterson: We don’t really want to speculate that until we get our products running on DX12. But, we suspect that some performance improvements will occur on the Xbox One and more will be likely to occur on PC. Additional performance should be visible on PCs simply because they can be upgraded to house more memory, run better processors and include higher end video cards; whereas the Xbox One will have the same standard hardware specs it has had since it shipped–therefore, the gains on the console most likely won’t be as noticeable compared to a high-end gaming rig. Either way, we welcome any improved efficiencies that can be gained on either system.

Rashid K. Sayed: What is your take on cloud gaming? Do you think that game’s visuals can be bettered with cloud processing?

Eric Peterson: We don’t really have an opinion at this time, since the products we are working on don’t utilize the cloud in this manner.

Rashid K. Sayed: Thanks for your time. Is there anything else you want to tell us before we let you go?

Brandon: I’d like to add that as both a huge fighting game fan and a huge Kung Fu Panda fan this has been an awesome project to work on. The final product is going to reflect the talent and passion that the team has for Kung Fu Panda and games of this genre.

One cool thing about this game is that it manages to be approachable to beginners, but still remains complex enough that the best of the best can push it past the limits we imagined. Parents and kids can play together and have a great time, while the hardest of the hardcore can build a tournament community around it. I can’t wait to see how the online community gets behind Kung Fu Panda: Showdown of Legendary Legends and what techniques and strategies form.