Layton’s Mystery Journey: Katrielle and the Millionaire’s Conspiracy Review – Fresh Out of Ideas

Layton’s Mystery Journey sticks to what’s been known to work in the past.

I loved the original Professor Layton game. Curious Village was charming as all hell, with a smart and inventive mix of visual novel with puzzle game, wrapped up in a cute detective story to boot. It remains one of my favorite DS games ever to this day.

Knowing a good thing, Level-5 have subsequently released no fewer than five Layton follow-ups- and all of them have been great in their own right, but none have quite come close to matching the magic that the original held, in my opinion. A large part of this has to do with diminishing returns- Level-5 hewed to their formula very closely, and each Layton game was essentially the same as the last, only with a new story and puzzles. The glamour of the magic trick had squarely begun to wear off by the time Herschel Layton took his final bow in Azran Legacy– a game, we were assured, would be his last outing.

Technically, that statement holds true, because Layton’s Mystery Journey: Katrielle and the Millionaire’s Conspiracy does not star everyone’s favorite top hatted Professor. Instead, it stars his daughter. A fresh character, a fresh start, right? Well… not really. Layton’s Mystery Journey: Katrielle and the Millionaire’s Conspiracy is a decidedly safe sequel- in fact, it is so safe, it often borders on being stale. It’s a game that not only maintains perfect and total continuity with the previous six games in the franchise, but also continues the grand tradition of basically being the same structurally- you are still solving mysteries, with the visual metaphor being you solving puzzles (as in actual puzzles, the kind you would find in a puzzle book). You’re still interacting with the world in a point and click visual novel inspired format. 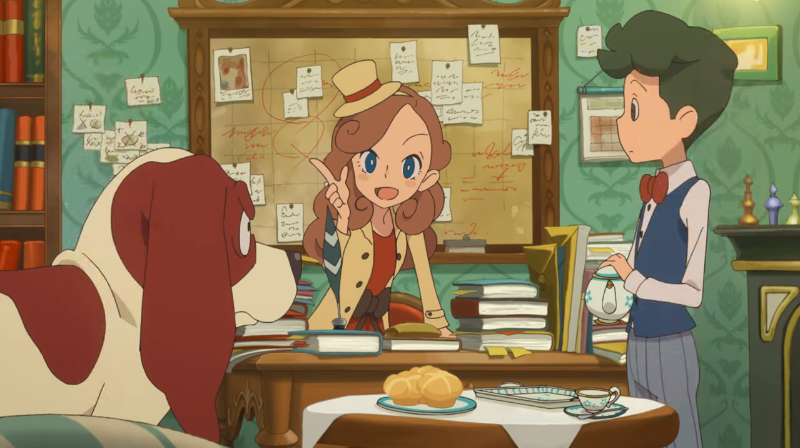 "Intriguingly enough, the actual storytelling appears to be de-emphasized- which, I feel, might have to do with the fact that the game was released on smartphones, too, and storytelling intensive games are not well suited to that format."

What is new is, as always, the story- playing as Katrielle, you are actually trying to figure out where Hershel Layton is. That is, in fact, the overarching plot for the game, and without getting into spoilers, it is handled as well as previous Layton game stories have been. Intriguingly enough, the actual storytelling appears to be de-emphasized- which, I feel, might have to do with the fact that the game was released on smartphones, too, and storytelling intensive games are not well suited to that format. It’s a shame, because Layton games have always approached their storytelling with a kind of aplomb and wide eyed charm that is rarely found anywhere else. When Katrielle and the Millionaire’s Conspiracy does unfold its wings to tell its story, it does it well- it just doesn’t do it often enough.

Thankfully, what hasn’t declined is the quality of the actual puzzles. They are as smart as ever, and they have a knack of making you feel simultaneously very smart and very stupid. As time has gone on, the puzzles have become better contextualized in the Layton games- no longer does a random stranger suddenly start asking you questions about sheep in a sheep pen. The puzzles you are asked to solve almost always are thematically consistent with where you are in the story. This helps the narrative feel decidedly coherent- which is good, because the de-emphasis on storytelling otherwise can often lead to the game feeling like a disparate collection of puzzles.

The puzzles aside, you, as always, get a whole collection of minigames to engage with, and spend your time on; the quality of these is largely hit or miss (none of them are as engaging as the Brownie Brown developed London Life RPG in Professor Layton and the Last Specter, which remains the highlight of the extracurricular content in the series so far), but they can, at the very least, provide for some nice variation from the constant puzzle solving that you otherwise have to endure while playing the game. 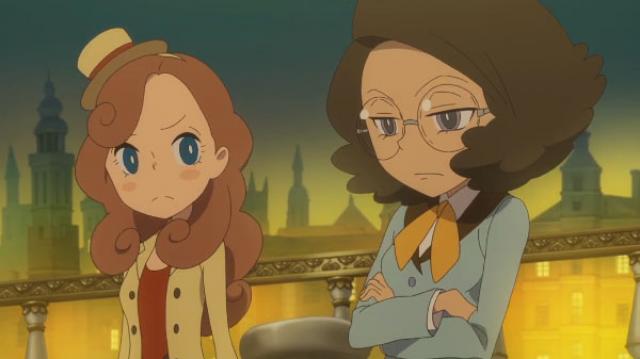 "This charm is best exemplified by Kat, the protagonist, who is probably the most likeable major character the series has had."

The lack of change in the formula, the recession of the storytelling to a less important status, and the constant puzzle solving can begin to wear out on the player; thankfully, this is where the game’s charm comes in and carries it through. This charm is best exemplified by Kat, the protagonist, who is probably the most likeable major character the series has had. She’s sweet, witty, and really compelling, and she is backed with excellent writing and voice work to boot. The surrounding cast (Ernest and Sherl) aren’t quite as good- but they’re not bad, either, and Kat’s charm is more than enough to carry them anyway.

Kat isn’t the only well written character, either- the game in general has sharp writing (which is just as well, because reading through reams of dialog and puzzles is literally all you do), complementing a really sweet story that I think long time series fans and newcomers alike will enjoy. Great graphics that look like a cartoon and some stellar music and voice acting wrap up the package.

Will Layton’s Mystery Journey pull you back into the franchise if you had begun to burn out on it? Chances are hugely unlikely that that will happen. But even with the staleness in the formula now decidedly having set in, Layton’s Mystery Journey is great for what it is and what it does, and, whether you are a (still engaged) long time series fan, or a newcomer just jumping in, you’re going to enjoy what it offers. Layton may not change much going from one game to the next, but maybe sometimes, that kind of comfort food is all you really need.

The staleness has begun to set in by now, but Layton's Mystery Journey is still a charming, sweet game with some great puzzles that engaged series fans and newcomers alike will fall in love with.

A copy of this game was provided by developer/publisher for review purposes. Click here to know more about our Reviews Policy.
Tagged With: android, iOS, Layton's Mystery Journey: Katrielle and the Millionaire's Conspiracy, level 5, Nintendo, Nintendo 3DS