Posted By Shubhankar Parijat | On 14th, Aug. 2019 Under Article, Interviews

Liberated is the kind of game that immediate looks unique and interesting. How much justice it’ll do to its look is something that we cannot possibly know yet, but one look at its impressive motion graphic novel style, its dystopian setting, and its unique blend of narrative and gameplay is enough to pique anyone’s interest- ours included. Piqued as our interest was, then, we recently sent across some of our questions about the game to the people responsible for it, hoping to get to know more about the title. The questions below were answered by publisher Walkabout’ communications manager Konrad Wałkuski. 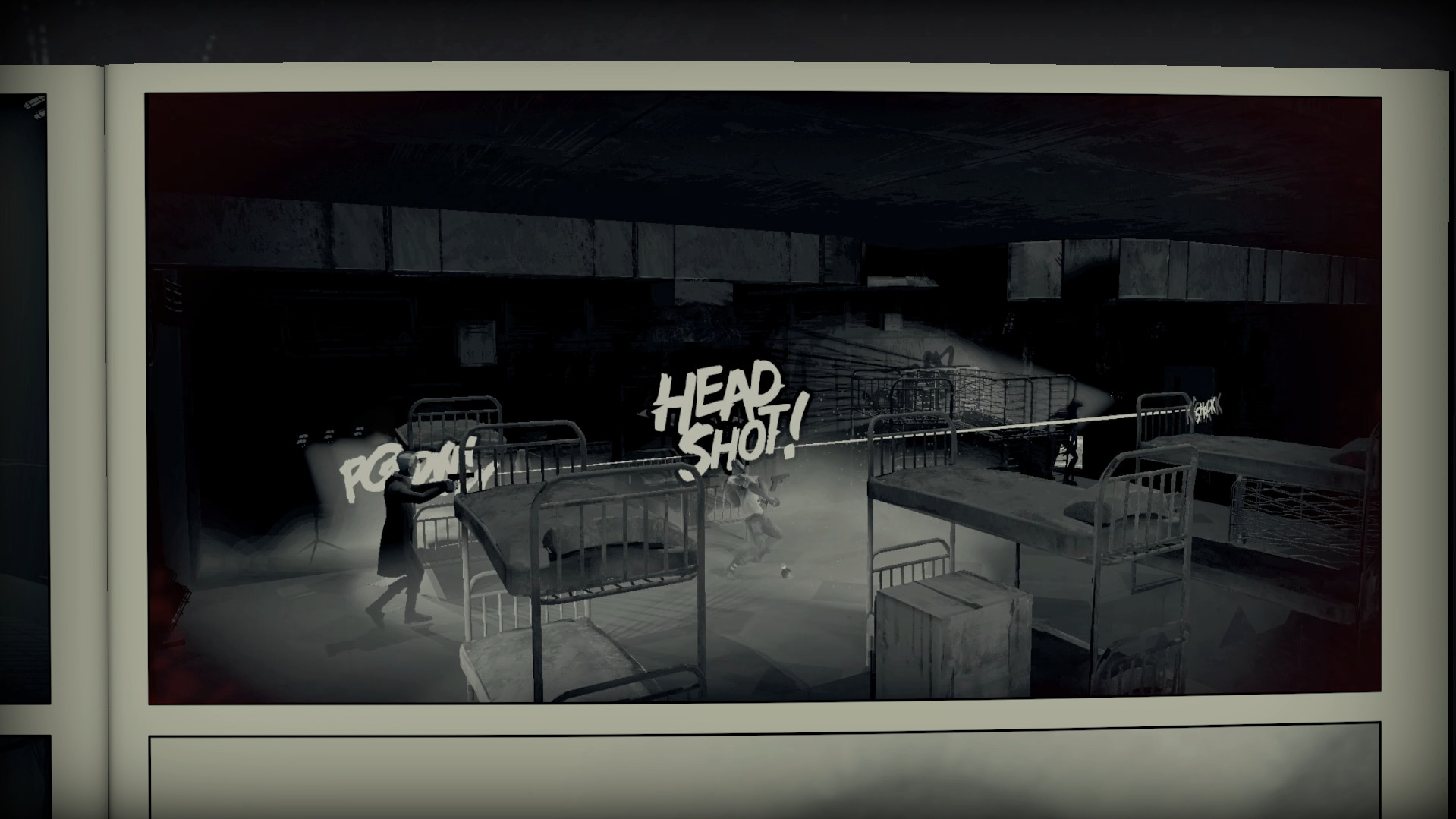 "Why comics? Simply because we love them. It’s a one-of-a-kind storytelling medium, and we believe great graphic novels are works of literary and visual art. So Liberated is our love letter to the medium, in a digital space."

Why did you decide to go with motion comic storytelling for this game?

Why comics? Simply because we love them. It’s a one-of-a-kind storytelling medium, and we believe great graphic novels are works of literary and visual art. So Liberated is our love letter to the medium, in a digital space.

Our work began years ago on an interactive graphic novel, the kind that we’ve been seeing pop up here and there for a while. That concept eventually evolved into what Liberated is today: a blend of comic book and rich action game.

It’s one of those things that everyone thinks about, but nobody has really done in the way that Liberated does it.

Creating a “playable comic” let us breathe new life into the classic format, and that’s the philosophy behind what we’re doing—honor the medium, and enrich it via all the cool stuff we can do digitally.

Liberated very much captures that familiar reading experience: the skeuomorphism and visuals, natural transitions between panels and pages, a story told via standalone issues.

That also defines how Liberated is being created: our first “build” of Liberated was a hand-drawn comic.

The premise of Liberated is a very interesting one, and one that has a lot of connections with the real world- is this a story that is looking to have some level of commentary on the real world, or are you instead looking to craft something that is more fiction?

Liberated should feel familiar. The world is grounded in reality and players will very much recognize the themes, conflicts, and technology in this story.

We consider it a near-future cyberpunk setting, there is very little sci-fi here. Liberated is not so much about showing off a “cool future”, instead we explore the punk in cyberpunk—rebellion, a struggle against the rise of fascism, corporate power, weaponized misinformation, surveillance technology. The Liberated are a group on the fringe of society which is otherwise disinterested, even complicit.

How divergent can players expect the branching narrative of Liberated to be?

Players will have choices in how they’ll approach certain situations, which will affect how gameplay, dialogues, and comic pages play out. For example, early on in the game you’ll be faced with a police search and will have to choose whether you want to try your luck at an escape or play along and surrender. If you decide to run, you’ll play out an action sequence as you flee across rooftops; otherwise, you’ll be taken in for questioning right away to a somewhat more amicable interrogator.

You’ll face more substantial choices as well, these might affect dialogues, gameplay, and world details. That said, we’re approaching Liberated very much like a traditional graphic novel—there is an important story here that we want to tell. 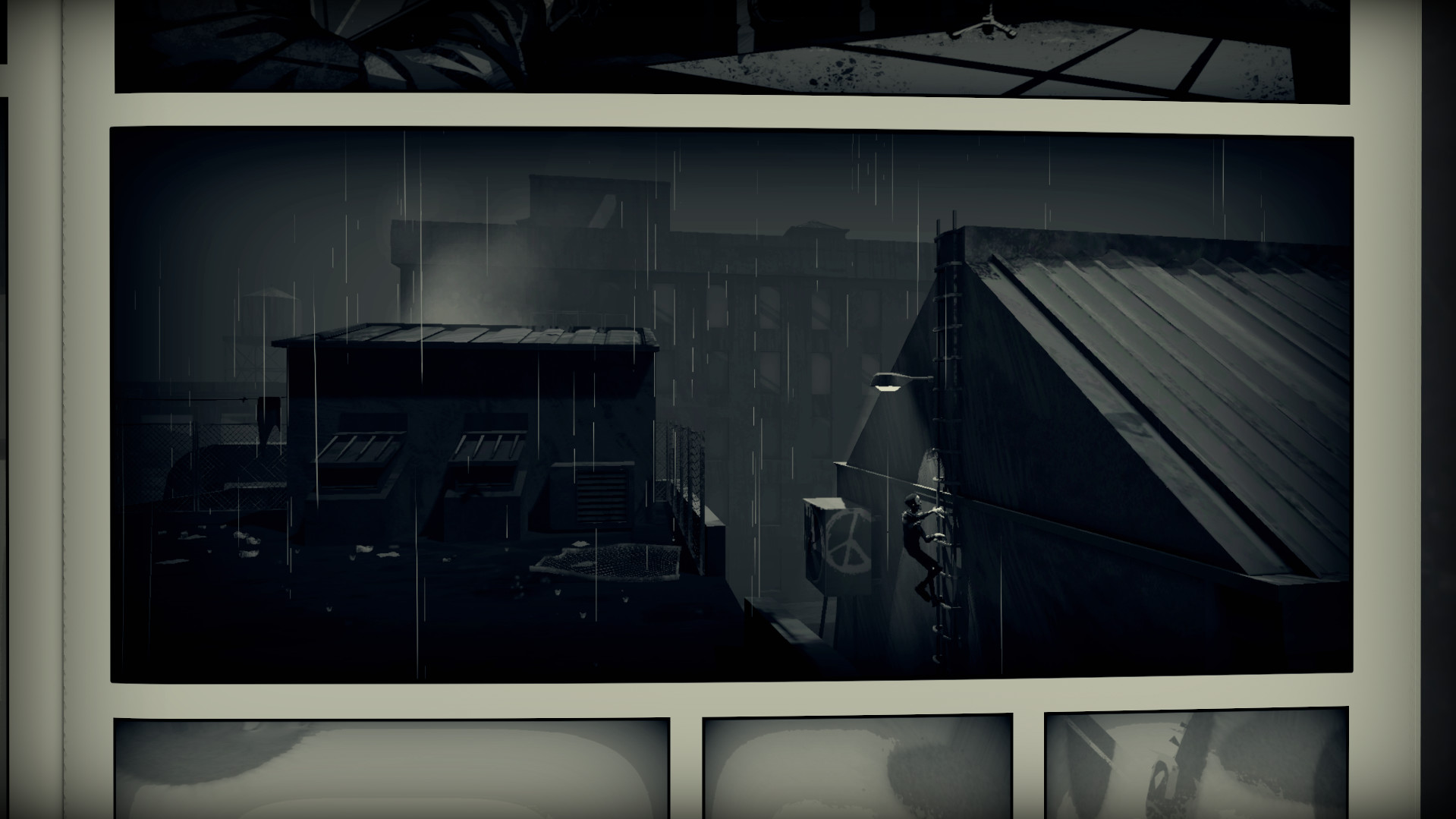 "The act of playing a video game within comic panels, is a really striking experience. It works for Liberated, and I think it can work for a slew of other comic book stories as well."

The decision to combine visual novel style storytelling with fully playable action sequences is an interesting one- how did you decide to go with such an approach?

The Visual Novel genre, as well as “interactive comics” (like Protanopia) have been doing great things with rich storytelling for a while—animation, interactivity—but these are still mostly passive experiences, they’re pretty basic in the traditional gameplay sense that you’d expect from a video game.

So we’ve decided to take this rich storytelling philosophy and combine it with substantial, rewarding gameplay. The end result, the act of playing a video game within comic panels, is a really striking experience. It works for Liberated, and I think it can work for a slew of other comic book stories as well.

Does the game emphasize one of those two aspects more than the other?

It really varies from issue to issue. Our goal is for both aspects to be equally meaningful, so the emphasis can be freely determined by the story in a given issue.

Issue #1 of Liberated is roughly 50/50 – it’s an introduction to the world and the gameplay. And once the story gets going by Issue #2 we can go more action-heavy for example.

Future issues will experiment with the ratios, we’re still iterating and playtesting, and the first four issues of Liberated are just the beginning. So much about this format is completely new,  that we need to see how players respond and understand what they enjoy.

Can you speak to us a bit about what sort of stealth mechanics will be at play in Liberated? On top of that, what can players expect from the combat and platforming sections?

Overall we’re aiming for slow-and-steady, deliberate gameplay. Vulnerability, trial and error—there is no run-and-gun power trip here. But the flow in each sequence will wholly depend on the situation you’re in and where the story takes you.

So in Issue #1 for example you’ll face several kinds of challenges: early on you’re still unarmed and need to slowly make your way past police patrols. So your tools are patience and observing patterns. A bit later you might end up in the escape sequence I mentioned earlier, so you’ll need to keep moving and watch your step as you leap from rooftop to rooftop.

Finally, you’ll face an infiltration sequence where you can use a mix of stealth and gunplay to make it into a government compound. Bring too much attention to yourself, and the combat challenge will become more difficult. 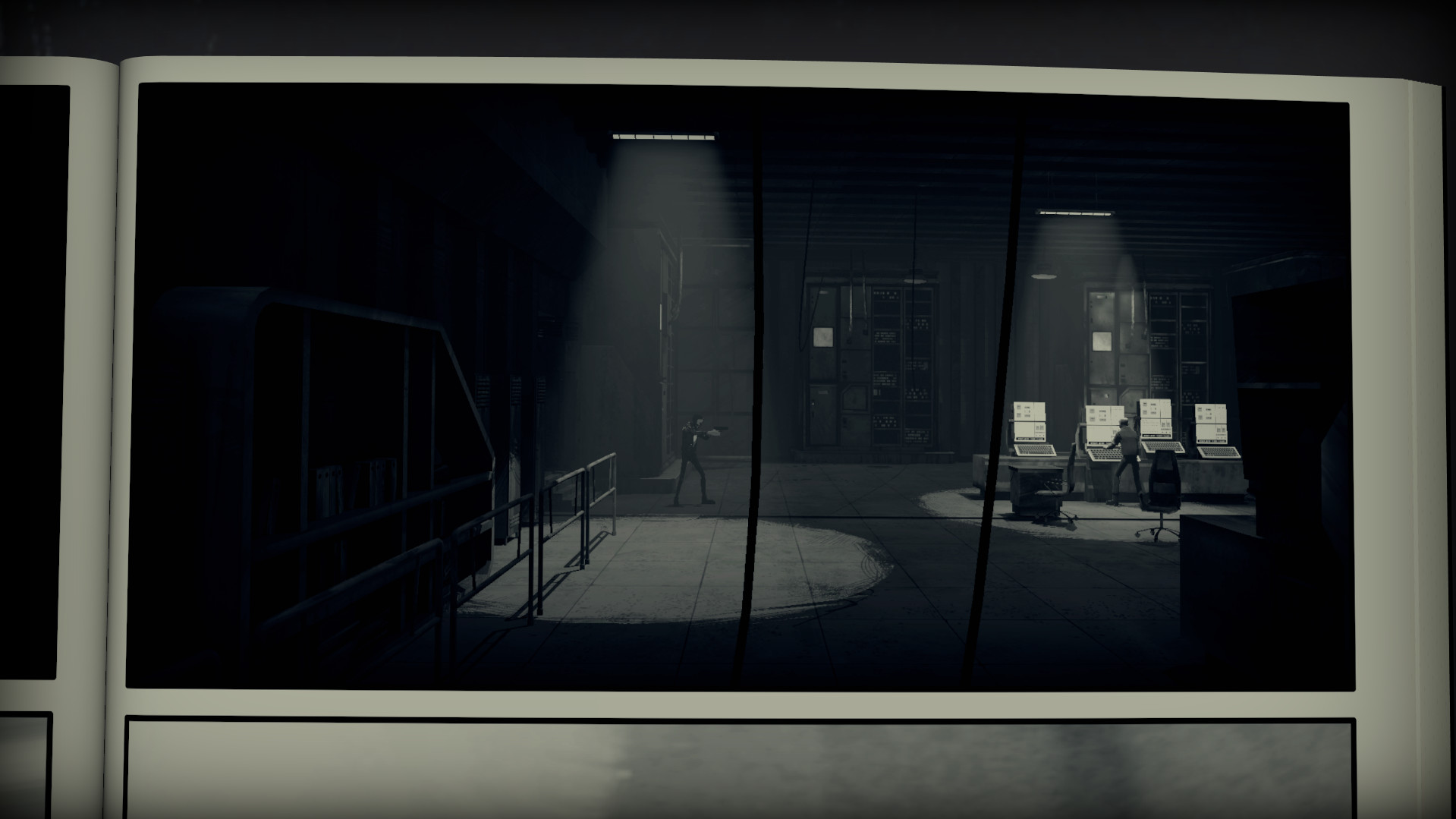 "The Nintendo Switch is a wonderful console, and we think it’ll be where Liberated really shines thanks to the flexibility. Just like you would with a comic, you can cozy up with your Switch at home and enjoy the story in handheld mode or on the big screen—but you’re also free to take it with you and read a few pages on your daily commute."

As an indie developer, what is your take on the Nintendo Switch, which seems to have become a haven for ambitious indie titles?

The Nintendo Switch is a wonderful console, and we think it’ll be where Liberated really shines thanks to the flexibility. Just like you would with a comic, you can cozy up with your Switch at home and enjoy the story in handheld mode or on the big screen—but you’re also free to take it with you and read a few pages on your daily commute.

Everyone that we talk to seems most excited to have Liberated on their Switch, which is why we’re targeting the platform for a day one release alongside PC.

Were there any particular games or any other media that you looked to for inspiration for Liberated?

There’s a lot here to unpack, I think the list of inspirations would be endless whether you’re looking at the format, the art style, or themes.

Naturally graphic novels as a medium have defined our work. We’ve literally read hundreds of comics from all over the world, but we’ve also studied how people read them—the physical act of interacting with a paper comic, understanding how to replicate that digitally. Seemingly mundane things, like how the camera operates and transitions between panels took countless iterations. In a funny way, Liberated is kind of a First Person Perspective game in the sense that the camera works the way your eyes would looking at a comic.

Then there are the pop culture inspirations: games like XIII and Comix Zone have pioneered comic book aesthetics in gameplay, you’ll get Sin City vibes from the art style, you’ll see themes similar to Black Mirror and the film version of V for Vendetta.

And of course, there is a lot of real life in Liberated. Our perspective as a Polish-based studio and everything that we’re exposed to on a daily basis: news, headlines, trends and shifts in political climate and social discourse. 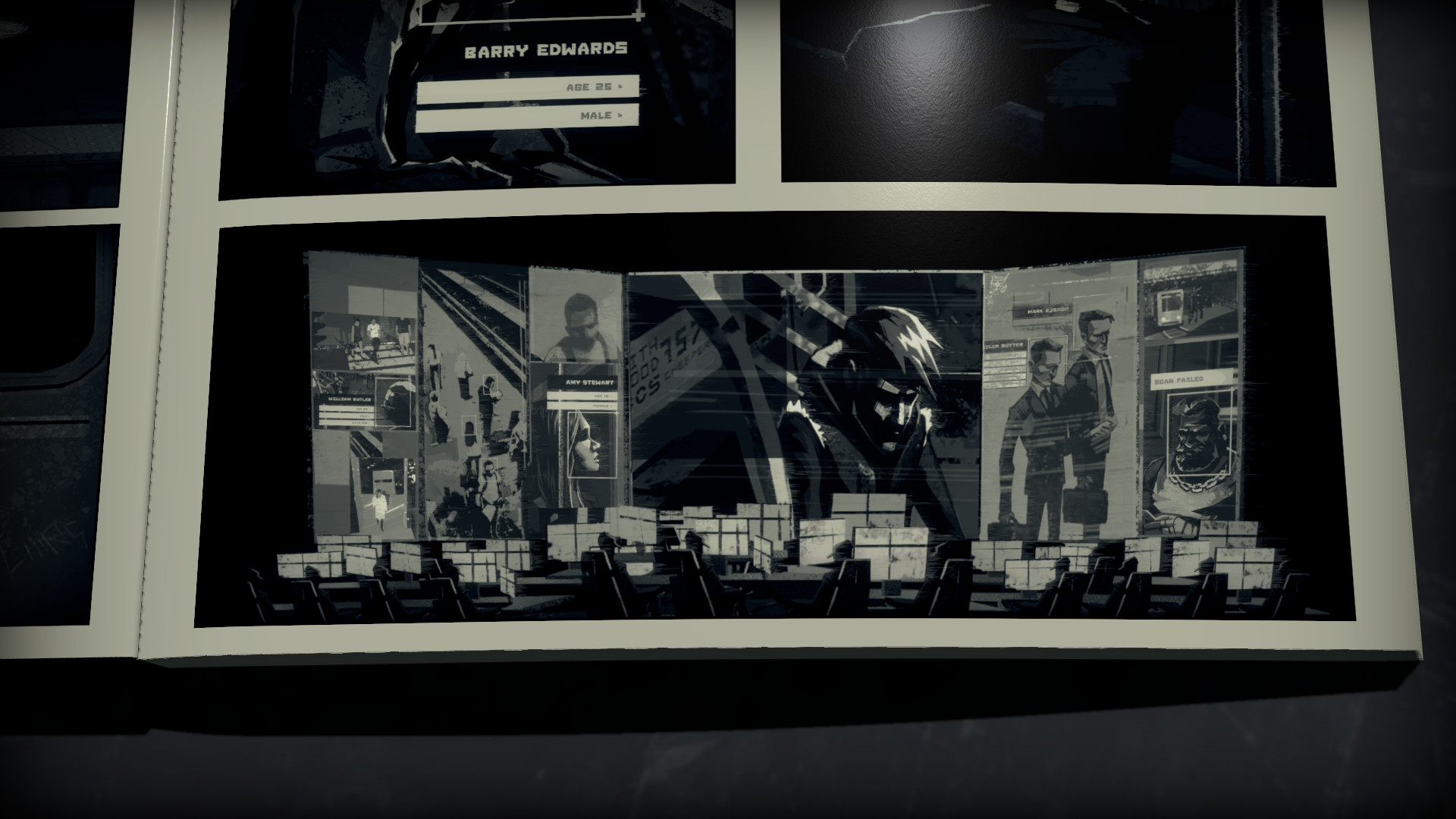 "I think that cross-platform gameplay and ownership, including cross-platform saves, are exciting and pro-consumer, so I’m glad we’re starting to hear more about it."

What is your take on Sony’s reluctant policy on crossplay with Xbox and Nintendo? Do you think cross platform will be one of the defining features of next-gen consoles?

I think that cross-platform gameplay and ownership, including cross-platform saves, are exciting and pro-consumer, so I’m glad we’re starting to hear more about it. Liberated is a single-player experience, but how cool would it be to just pick it up and continue the story regardless of the platform you’re on at the moment?