Posted By Kartik Mudgal | On 30th, Aug. 2012 Under News | Follow This Author @KartikMdgl 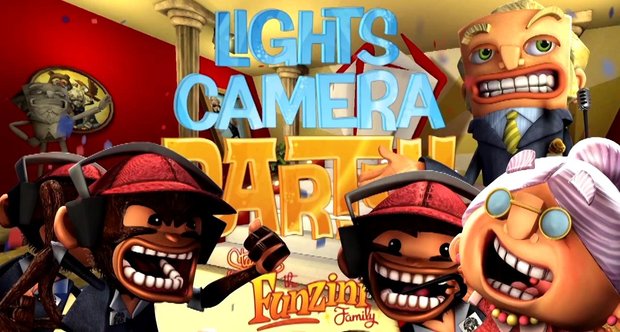 Lights, Camera, Party! is now out on the PSN and it is a Move enabled game. It runs on the Unreal Engine 3, and is developed by Frima Studio, Canada’s largest independent developer.

It’s a 8 player game and they can all compete with one PS Move controller.

“Our goal with this game is to provide quality entertainment for the whole family, something accessible for the youngest and oldest members of the family, while still providing a thrill and challenge for the experienced gamers. With a huge variety of modes, mini-games and difficulty levels, there’s something for everyone here.”

Step into the shoes of the Funzini family as they play their way through a series of eccentric game show challenges in this family-friendly, PS Move title. Feed pizza to an angry dinosaur, throw bananas at a sleeping crowd of monkeys, blast cow-stealing UFOs, jump over a kiddie pool full of hungry sharks and obliterate candy-filled piñatas.

Check out the game features below: