Yakuza developer Ryu Ga Gotoku Studio’s recent RGG annual summit presented a triptych of Yakuza-oriented title announcements: historical samurai spinoff Like a Dragon: Ishin! is set to make its Western debut come the remake’s release in February 2023; elsewhere, Like a Dragon Gaiden: The Man Who Erased His Name focuses on Yakuza series mainstay Kazuma Kiryu after the events of Yakuza 6: The Song of Life. Whilst focus of the RGG Summit centred mostly on Like a Dragon: Ishin!, the announcement of the next title in the long-running Yakuza series – Like a Dragon 8 – has certainly whet the most appetites.

Before we continue, it’s worth pointing out that the moniker ‘Like a Dragon’ – as Yakuza has always been known within its native Japan – has replaced the old Yakuza branding. Sega’s reasoning is ‘Like a Dragon’ more closely aligns Western iterations of the series with its Japanese counterpart and will be how the series is known worldwide going forward.

Like a Dragon 8 will be a continuation of 2020 reboot Yakuza: Like a Dragon, a title Ryu Ga Gotoku Studio bravely hit the reset button for after seven mainline entries. It deviated superbly from previous Yakuza titles, opening the door for series newcomers whilst – mostly – appeasing long-time fanatics.

Combat-wise, Like a Dragon eschews the button bashing beat ‘em up action of its predecessors for turn-based JRPG-style brawling, requiring players to control a party of characters. The series’ former lone wolf narrative is also transformed into gangland fable, with Like a Dragon’s JRPG flavour featuring a new series protagonist in the form of the extremely likeable Ichiban Kasuga too, himself an orphan raised in nefarious bath houses now low-level Yakuza. Hallmarks of the series, its humorous quirks, its convoluted sub-plots, and joyously time-wasting side content are all present and correct.

Most exciting of Like a Dragon 8’s recent reveal trailer is the prominence of Yakuza poster-child Kiryu-san, strolling alongside new boy Ichiban Kasuga, both men backlit in Kamurocho neon. Kazuma Kiryu does appear in Yakuza: Like a Dragon of course, but he’s relegated to fresh protagonist Kasuga’s poundmate; he’s someone to be called into battle when requested. His appearance feels more like a passing of the torch from old to new rather than a hefty presence throughout the game. The sight of the two series mainstays idling side-by-side is a very welcome one, and with it the promise of dual controllable protagonists in Like a Dragon 8.

Yakuza games have featured multiple player characters before of course – Yakuza 0’s Kiryu and Majima for instance, or Yakuza 4 with 4 playable protagonists – but dual-wielding two major characters in a series revamped as gangland soap opera, with in-depth JRPG party system, then we’re looking at the very real chance of being able to create and maintain a party for both characters. After Kiryu faking his own death and absconding out of sight at the end of Yakuza 6, his whereabouts and wellbeing has been cause for concern for many a Yakuza player. So, whilst Kiryu did re-emerge in Yakuza: Like a Dragon, and we will indeed have the gaps filled in between Yakuza 6: The Song of Life and Like a Dragon 8 in next year’s Like a Dragon Gaiden: The Man Who Erased His Name spin-off, it’s just great to see Kiryu in high spirits and sharing the limelight once again.

It’s a dead-cert that turn-based combat will return in Like a Dragon 8 too. Yakuza: Like a Dragon’s turn-based brawling is not without its detractors though. Admittedly, the encounters did rely too heavily on individual party members’ special moves rather than harnessing the combined strengths of the whole team to dish out extreme damage. The ability for a character to grapple an opponent whilst another doles out a drumming at the command of the player is one obvious improvement, for a character knocking an opponent to the ground in close enough proximity for another in the party to kick them whilst they’re down is the closest we’ve come to combining party members in the same move. But these are minor gripes RGG Studio will surely be able to refine.

I for one love the turn-based battling system in Yakuza: Like a Dragon. It’s character movement preserves some of the vibrant feel when fighting in previous Yakuza titles, whilst QTE actions and flamboyant special ability animations provide bite-sized sugar rushes that keep battles feeling fresh and invigorating. Like a Dragon’s flashiness made grinding through high-risk areas to level up character XP feel consistently enjoyable, and less like a chore. The game’s poundmate system whereby Ichiban can call in reinforcements akin to summons like in other JRPG’s presented elaborate and oftentimes absurd intro cutscenes for called-in characters too, which for a series famed for balancing dramatics with humour feels extremely well done.

Most of all, the turn-based battle system is simple enough on the surface. It’s an easy format for series newcomers or turn-based combat novices to pick up without too much trouble. Owing to the game’s character jobs system, the battling has unrelenting depth, which is ideal for those more seasoned JRPG players. 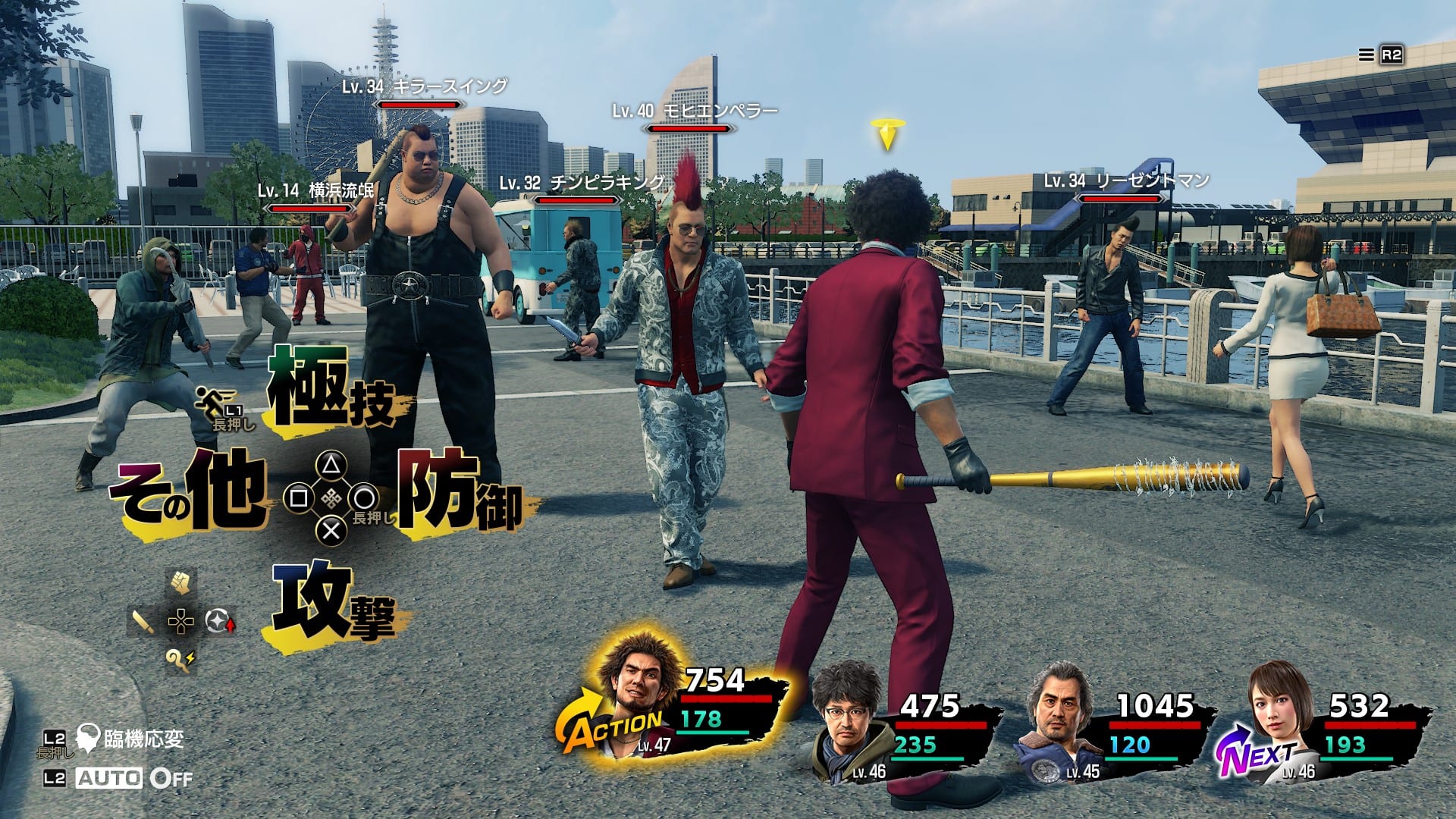 Yakuza: Like a Dragon’s choice of setting is top-notch too; returning is the fictional Kamurocho red light district of Tokyo and Sotenburi district in Osaka, but the new Isezaki Ijincho district of Yokohama – modelled after real-life Isezakichō – is frequently spellbinding. Each of the districts’ distinct areas have their own personality and charm, which is something perhaps prior Yakuza titles failed to fully exploit. As dense as Kamurocho is, Like a Dragon’s Isezaki Ijincho ramps up the detail despite being a larger surface area. It’s a playground for exploration, practically brimming with entertaining side-quests and distractions, and to me at least, feels the closest thing to visiting Japan outside of, you know, actually going there. I’m salivating at the prospect of exploring Yokohama once again in Like a Dragon 8, excited at exploring the same streets facelifted by current gen hardware.

As a series, Yakuza has always scrutinised the negative aspects of organised crime – its corruption, betrayal, suffering, and collateral damage are all burdens weighing heavy on the games’ central characters. Ichiban Kasuga, like Kazuma Kiryu before him, is a man supplanted into this world. He’s born into it, nurtured by it, but instead of succumbing completely to it he’s moulded by a desire to life a live of peace and tranquillity. Kasuga and Kiryu are antitheses to the brutal life of the Yakuza. Even if you don’t fancy yourself as a lover of crime-based fiction, or JRPG’s, Yakuza’s masterful blend of drama and hijinks makes it an ideal series for almost anyone. Its worlds are enthralling and its characters empathetic – each game is a memorable experience and it’s fantastic we Yakuza fanatics get to eat so well over the next couple of years. Like a Dragon 8 is looking like it’ll be a multi-platform release come 2024, and I for one can’t wait.