Being the third major entry in the long running series, LittleBigPlanet 3 has a lot riding on its shoulders. The upcoming puzzle-platformer video game is being developed by Sumo Digital with Media Molecule helping in unknown capacity. LittleBigPlanet 3 will also be a cross generation title with a November launch planned for the PlayStation 3 and PlayStation 4 versions.

GamingBolt caught up with the game’s senior producer Daimion Pinnock to know how the game is shaping up. Check out his response below.

Leonid Melikhov: Tell us how LittleBigPlanet 3 will be different yet be faithful to the theme of the franchise?

Daimion Pinnock: LittleBigPlanet’s DNA is something that has been available since the PlayStation 3 and ultimately the team has looked to take it to the next level while still being faithful to what people know about LittleBigPlanet and Sackboy. Sackboy is still the star of the show, you can still customize him and his adventures. We wanted to add a little bit more to the gameplay of LittleBigPlanet.

Sackboy has the ability to climb as well which has added to the gameplay. In addition to that, we got Toggle, Swoop and Oddsock who have added a whole new level of gameplay to the levels and to the story, and also giving creators more tools to make some fantastic levels that add to over 8 million levels that are already in existence of LittleBigPlanet franchise. 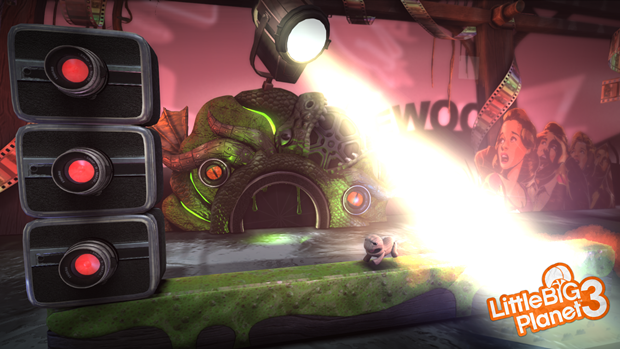 "There is a lot of new stuff that will be available for online for sure. Obviously, we're using the power of the PS4 which is definitely a-lot more accessible."

Leonid Melikhov: Tell us more about Sackboy friends. What kind of abilities, will Sackboy and his mates have?

Daimion Pinnock: We’re giving him new tools, one of the things we’re showing off is the Pumpinator which uses the air to blow and pull. He now has the ability to climb which has added whole new elements of how you use Sackboy. One of the new characters Oddsock is a four-legged character who can be customized. You can make him a horse or any sort-of four-legged creature that you can think off. You’ll be able to make levels specfically for him, he is very fast, he is able to jump, climb on walls and do wall jumping which adds a whole new level of gameplay which Sackboy isn’t able to do, but ultimately helps him in his adventure.

Then you’ve got Toggle. Toggle can be really big, so he is heavy but very strong, a little bit slower, but his able to kind of sink so you can have him run along the bottom of water for example. Then, he has the ability to transform into like a small toggle/mini toggle. Using it, Toggle can run across water, he is very light and can fit into small little areas that isn’t accessible by Sackboy. Then finally, you’ve got Swoop. Swoop is a character that is able to fly, he is able to carry his friends and he can carry a small Toggle, but he can’t carry big Toggle because he is a bit too heavy.

Leonid Melikhov: Tell us about the customization options in the game. Furthermore what more can you share about the various tools and level maker?

Daimion Pinnock: So we’re not chatting too much in regards to Create, but we are adding a host of new tools that are going to really expand what creators are able to do. We’ll be talking more about that somewhere between now and launch. There is definitely a host of new tools for creators out there. Also, for people that like playing what other people have created in the community. Ultimately, it’s going to help them to really expand the whole LittleBigPlanet experience and also at the same time for people that are used to the franchise, it will be very familiar for them as well.

Leonid Melikhov: How will the online component differ in LBP3? Will it be largely be same “play, create and share” kind of mechanics?

Daimion Pinnock: Oh! There is a lot of new stuff that will be available for online for sure. Obviously, we’re using the power of the PS4 which is definitely a-lot more accessible. We’re not really talking too much about that today, but yeah, obviously we’re looking to take the advantage of the PS4 and add a host of new tools and community driven accessibility to the game for consumers.

Leonid Melikhov: Is there going to be a single-player campaign?

Daimion Pinnock: Absolutely! In the single-player campaign, you take control of Sackboy and also you are going to use his friends as well. 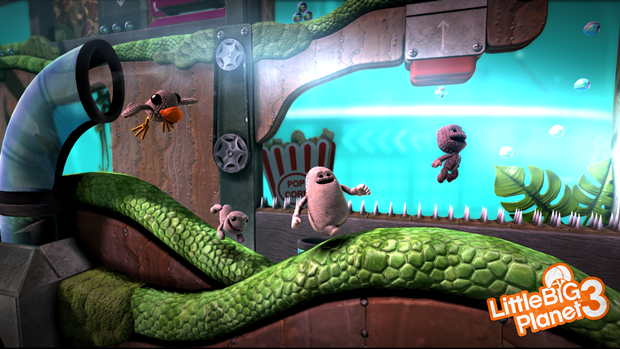 "I think ultimately, as we get more used to the PS4, you're definitely going to see teams being a lot more creative and a lot more inspirational with the titles that are on display."

Leonid Melikhov: What are you thoughts on the PS4? When we see games like Uncharted 4 and The Order 1886, do you think this is just the beginning of what the PS4 is capable of?

Daimion Pinnock: Yeah, I mean we are not even a year into the life cycle of the PS4 and I think that with a lot of the titles, I think this is just the tip of the iceberg. I think ultimately, as we get more used to the PS4, you’re definitely going to see teams being a lot more creative and a lot more inspirational with the titles that are on display. The titles you’ve just mentioned, they’re really good, high quality and always looking for new ways to innovate and bring stuff to the consumers.

Leonid Melikhov: Are you guys targeting 1080p/60 fps for LittleBigPlanet 3?

Daimion Pinnock:  Absolutely. [This was later clarified by a PlayStation representative: “The game will target 30fps/1080p to ensure we’re able to build the game for both the PS3 and PS4 systems.” ]

Leonid Melikhov:  The PS3 version will launch alongside the PS4 version in November. Am I right?

Leonid Melikhov: A lot people had the complain in previous LBP games that sometimes when you jump it felt a little floaty and I am sure you guys heard about that?

Leonid Melikhov: Are you guys doing anything to fix that in LittleBigPlanet 3?

Daimion Pinnock: It has been addressed.

Leonid Melikhov: Awesome man, thank you so much!