Mad Max Visual Analysis: PC vs. PS4 vs. Xbox One

The wasteland has never looked better, no matter which platform you experience Mad Max on.

In the midst of Metal Gear Solid 5: The Phantom Pain’s release, Avalanche Software’s Mad Max may have been slightly downplayed in terms of hype. While critical reception on the gameplay is a completely different matter altogether, it is worth noting that the visuals are certainly worth exploring the game for. The wasteland aesthetic has been captured brilliantly in Mad Max and you’ll more than a few flashbacks to the blockbuster Mad Max: Fury Road. Now it’s only a question of how well those visuals hold up in real world scenarios. Avalanche took to cancelling previous gen versions of the game to focus on PS4, Xbox One and PC. Did it pay off?

The PS4 and Xbox One versions both render at a 1920×1080 resolution with a 30 FPS frame rate. Both versions employ V sync and the overall frame rate is solid for the most part, save for a few drops on the PS4 version. These are fairly minor though and are few and far between for the most part. It’s good that Avalanche chose to lock the game’s frame rate instead of opting for a higher unlocked frame rate that would have just created an uneven experience on both consoles. 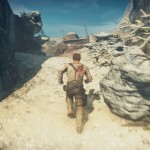 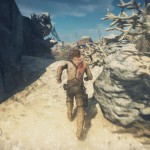 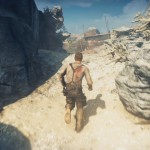 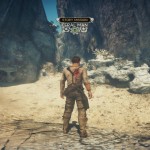 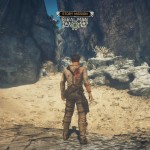 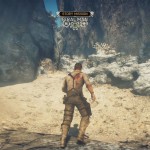 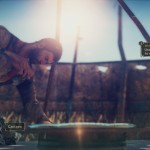 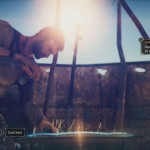 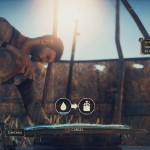 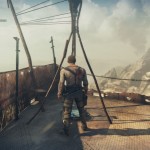 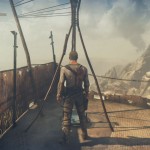 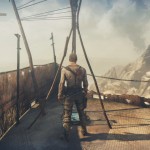 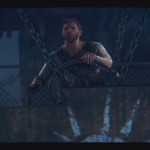 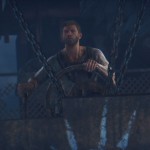 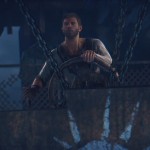 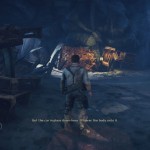 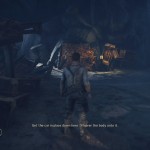 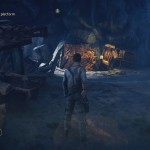 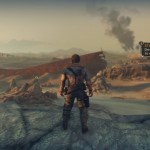 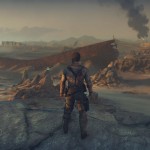 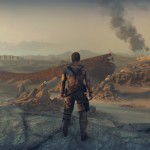 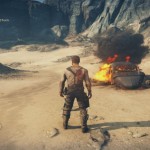 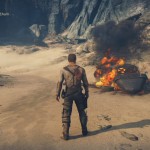 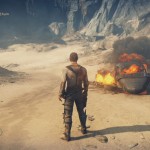 The locked frame rate comes in even more handy when you consider the detail done on the game’s engine which handles alpha and volumetric effects and excellent lighting with equal aplomb. Even with sandstorms hitting you and lightning bursting through the sky, the game’s frame rate is stable.

It’s worth noting that Avalanche also put in a lot of time making sure both the PS4 and Xbox One versions are similar across the board. Depth of field and motion blur look pretty much the same regardless of which console you play and this extends to the effects as well. Anisotropic filtering is in effect and it’s decent, offering better image quality than the tri-linear filtering seen in many other games. However, it’s hard to ignore just how similar both versions look. Even the draw distances are absolutely the same.

Texture models, cloth simulation and physics utilize a heavy amount of HDR and shadow casting, leading to realistic looking characters, especially during movement. There’s again very little difference in these details between both console versions. The only real graphical issue noticed in Mad Max was shadow dithering. Just like Metal Gear Solid 5: The Phantom Pain you’ll still notice shadow dithering, which essentially results in grainy looking shadows. High quality edges on shadows are missing on the console versions and it tends to stand out at times.

However, it’s obvious from the outset that the PC version of Mad Max would be superior. Along with higher texture resolution compared to the console versions, the level of shadow quality is higher. Alpha effects and volumetrics, as seen in dust storms, tend to look similar across all versions. The console versions use the equivalent of the PC version’s high settings and all three versions use custom post processing anti-aliasing which works well enough in removing rough edges and per pixel artefacts.

However, the less aggressive level of detail on the PC version along with better anisotropic filtering results in more detailed and betting looking visuals overall. And of course, there’s also the fact that the PC version can run at 60 frames per second compared to the console versions’ locked 30 FPS.

Though there are presets, the PC version’s graphical options are manifold and diverse. Despite only one anti-aliasing option (assumed to be FXAA), you can customize the number of shadowed lights, parallax mapping on terrain, depth of field quality, volumetric light quality, heat haze, landscape debris, enable or disable V-sync, geometric detail, texture detail, motion blur, decals, soft particles, SSAO, fog/particle upsamping quality and more. You’ll need the latest drivers to achieve this, namely Nvidia’s 355.82 and AMD’s 15.71 drivers so update today. 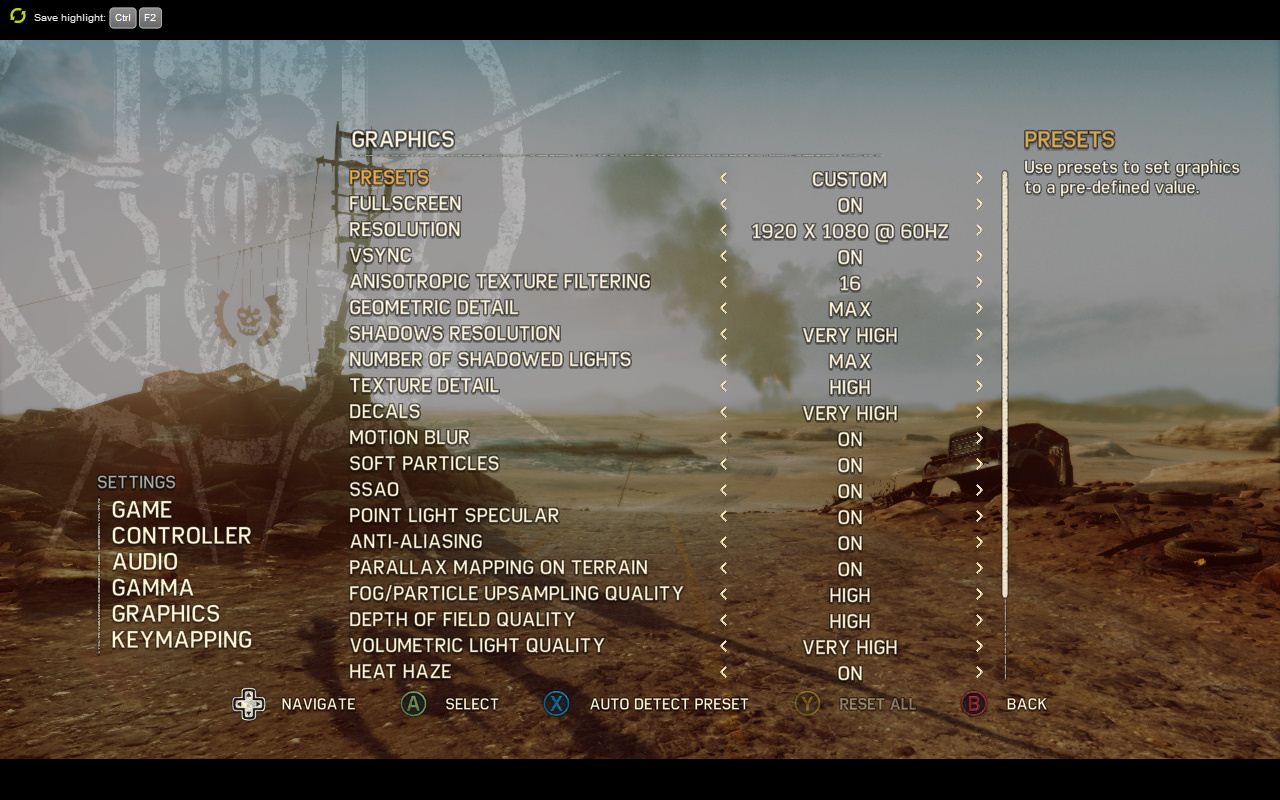 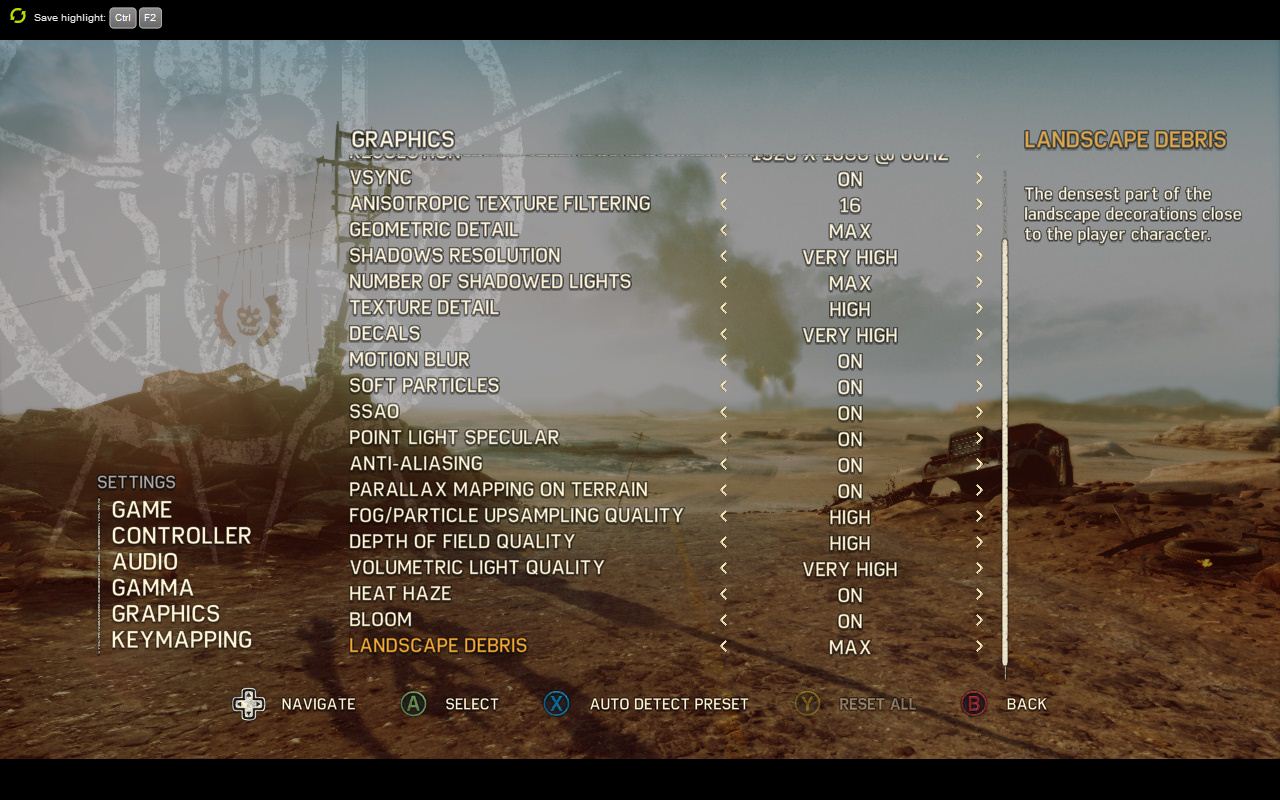 Using an Intel Core i7-5960X and 16 GB of RAM and a variety of GPUs, we benchmarked the game at 1920×1080 resolution and achieved the following frame rates:

Overall, these are pretty solid frame rate scores, especially on the mid-range GPUs. For fun’s sake, we then took to benchmarking at 3840×2160 resolution.

The performance suggests that Mad Max is highly GPU bound but all the same, it’s an excellently optimized PC port from Avalanche Software. Even if you decide to opt for a mix of high and medium settings at 1920×1080 resolution, you’ll have no problem achieving a relatively stable 60 FPS frame rate on an average to above average GPU.

This means that the PC version is recommended above all. With its ability to hit 60 frames per second and featuring better usage of AF and LOD, not to mention the superb optimization that allows it to run on a variety of hardware, it’s definitely our pick of the lot.

It’s a toss-up between the Xbox One and PS4 versions, primarily because there isn’t any real difference between them. If we were being picky, we’d choose the Xbox One version simply because its frame rate is slightly better at times. It isn’t always the case as drops on the PC version are very few when they do emerge so you’ll be satisfied no matter which version you pick.

On a side note though: If Avalanche has been this good about optimizing Mad Max on PC, how awesome will Just Cause 3? We’ll have to wait to find out but thus far, things are looking great.