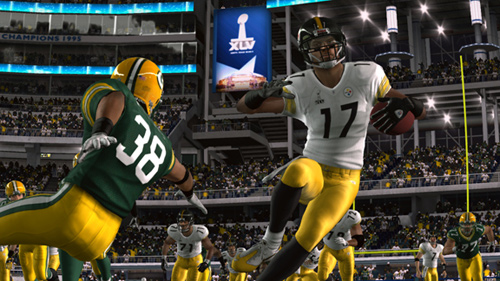 EA’s has just announced that the cover for Madden NFL 12 will be chosen by you, the fans. There will be 32 teams to pick from with only one making front the cover. Green Bay Packers quarterback Aaron Rodgers, Drew Brees, Michael Vick (Philadelphia Eagles), Maurice Jones-Drew, Adrian Peterson and Julius Peppers are just a few notable contestants out of the 32 candidates.  Head over to the voting site here before it ends on April 27th.

REDWOOD CITY, Calif.–(BUSINESS WIRE)– Electronic Arts Inc. (NASDAQ:ERTS) announced today that football fans across the country will have the opportunity to select the next cover athlete for the award-winning Madden NFL franchise. Beginning today and continuing through April 27, fans can participate in a bracket-style voting campaign on www.ESPN.com/MaddenVote and choose among 32 candidates (one representative from every NFL team) to appear on the cover of Madden NFL 12. Fans’ votes will determine which NFL players advance through the seeded bracket, culminating in the reveal of the Madden NFL 12 cover athlete on ESPN’s “SportsNation” on April 27.*

“Whether it be from fans, media, agents, or even the players themselves, there’s never a shortage of opinions when it comes to the annual selection of the Madden NFL cover athlete,” said Anthony Stevenson, Senior Product Manager of EA SPORTS. “So this year we’re handing the keys over to the public. ESPN continues to be a tremendous partner of the Madden NFL franchise, and it makes perfect sense for ‘SportsNation’ to be the platform that gives fans the ultimate say in who graces the cover of Madden NFL 12.”

From March 21 — April 27, fans can log on to www.ESPN.com/MaddenVote to vote daily for their favorite cover athlete candidate. Every Monday throughout the campaign, fans can tune in to ESPN’s “SportsNation” at 4pm Eastern Time for the latest voting results and see who will advance to the next round. Fans can also visit the Madden NFL Facebook page (www.facebook.com/EASPORTSMaddenNFL) to fill out their own Madden NFL 12 cover athlete bracket to compete against their friends and co-workers for the chance to win a variety of prizes including Super Bowl tickets and copies of Madden NFL 12. Visit www.facebook.com/EASPORTSMaddenNFL for Official Rules.

“ESPN is proud to continue its tradition of serving fans by collaborating with EA SPORTS and putting the cover vote of Madden NFL 12 in their hands,” said Raphael Poplock, Vice President, Games & Digital Partnerships, ESPN. “We believe ESPN provides the perfect platform for fans to be heard, and encourage everyone to support their favorite representative in this bracket-style vote.”

Candidates from each NFL team were selected and seeded based on a variety of criteria including on-the-field performance during the 2010 NFL season, their visibility within their franchise and community, and their personal career journey.

Madden NFL 12 marks the 23rd edition of the video game in franchise history. Since its debut in 1989, Madden NFL has over 90 million units sold-in to date. Madden NFL 12, which launches in August, will provide an immersive and authentic experience that fans have come to expect from the award-winning franchise, including all 32 NFL teams and more than 1,700 NFL players.

* The Madden NFL 12 cover announcement date is subject to change. Visit www.maddenNFL.easports.com throughout the campaign for updates and for more information.

All player participation has been facilitated by NFL PLAYERS, the licensing and marketing subsidiary of the NFL Players Association.