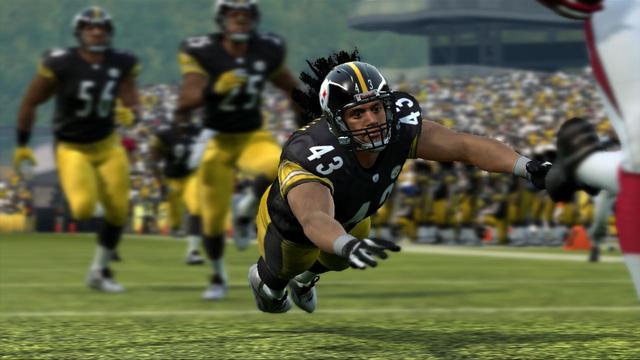 EA has announced that Madden NFL 12 has sold over 1.4 million copies in a week and has outperformed last year’s first week figures by 10%. They also announced that the digital revenue is up by 78%.

“Madden NFL 12 is off to a great start, and we’ve seen a tremendous amount of excitement and demand this first week,” said Chris Homeister, senior vice president and general manager of the home entertainment group at Best Buy. “Fans lined up at Best Buy stores around the country for midnight launch events to be the first to bring Madden NFL 12 home and get a jump on their rivals.”

Among the additional notable accomplishments for Madden NFL 12 in its first week at retail:

– Madden NFL 12 fans have played more than 5.4 million online connected game sessions since launch; the equivalent of more than 10,000 regular NFL seasons.
– Madden Ultimate Team has been a big hit, with fans having purchased nearly 200,000 Madden Ultimate Team card and coin packs in the first seven days.
– EA SPORTS Season Ticket subscribers got a jump on the competition, with early full-game digital access to Madden NFL 12 beginning on August 26. Fans logged more than four million total gameplay minutes in the early access period.
– Within its first week on the market, Madden NFL 12 reached the number one top paid spot on the Android market and ranked in the top 10 grossing on the App Store for iOS platforms.

“With the start of the NFL season only days away, fans are thrilled to get back to football and they’re doing so in record numbers through Madden NFL 12,” says Andrew Wilson, executive vice president of EA SPORTS. “The growth across console and digital shows that the appetite for the Madden NFL franchise has never been bigger.”

Looks like the game did exceptionally well for EA. Are you satisfied with the game tell us in the comments section below.