Is this year's Madden NFL entry any better?

Having recently played and reviewed NCAA Football 13, it is hard not to compare Madden 13 to each other. Madden 13 builds off a very old franchise that has been going solid since 1990’s. It’s been a very impressive run, and since it builds off of an ever changing roster, there’s no reason to stop. The only problem with the franchise is the franchise itself. With a new iteration every year there needs to be something to bring gamers back. There needs to be a good balance for new comers and returning gamers.

With the threat of being stale Madden 13 has broadened its options with Kinect voice controls. The voice controls allow you to make play options and changes to plays on the fly, without having to open up additional menus to fumble through. Offense and defense have their own set of commands and even allows players to call options to set up defense on particular players. My only problem with the voice controls turns out to be the lack of Kinect. There was no option to change the voice controls from Kinect to a headset. The major issues here are that if you prefer not to shout across the room, or let’s say you didn’t buy into the Kinect hype and never bought one, then you can’t use any voice control at all. Without the Kinect you can still make all the calls, however you are forced to fumble through the menus. 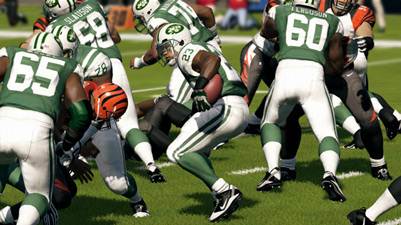 Getting to the game itself, the menus looked like they were fashioned after the newer Xbox 360 dashboard. It’s hard to be for or against it. For some reason the NCAA menu was very in depth unlike the slimmed down Madden menu, however Madden menu was stream lined and fast to navigate around.

Game play was almost exactly like NCAA’s. All passing, running, spinning, and punting were near identical. You could play a career mode as a player or coach, online or offline to win the super bowl. As with NCAA, you can create a new character, or play an existing character based on a real life NFL player. Again, like NCAA, if you select a player who is not on the field all the time, like a quarterback or running back, you can skip the plays your character is not involved in.

On surface these games were identical and it really took some time to find the differences. The first difference would be the quality of character models. I had an issue with some NCAA models being low quality. Madden characters have much better detail. They were on par with the quality of the current gen consoles. I didn’t see any major corners cut in quality. Attention to detail was also spent on new sports commentators Jim Nantz and Phil Simms to the Madden series. They provided nearly 9000 new lines of commentary ranging from situation-specific, to rival matchups and more to make gamers feel like they are watching a live broadcast.

When it came to choosing plays, once again Madden 13 was stream lined. In NCAA you had to select every play. In Madden you can either go with the quick selection, or open the playbook to select your plays. At first I felt like I needed to be in control, like NCAA, but after a while I found myself mashing on the quick button just to get to the next play. When it came to career mode, I selected Payton of the Bears to simulate his career. Although I played 3 preseason games, when it came time for season games, the simulation took over and only let me play field goal attempts. It seemed pointless to select a running back career only to play the kicker’s. The only other plays I was involved with were quarterback kneels. After playing an entire season of simulated bench warming I moved on to other game modes. 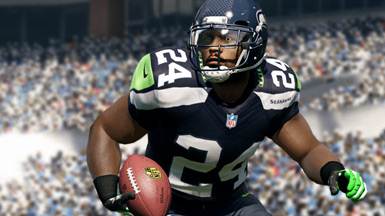 One of Madden 13’s major overhauls comes to the passing game. With NFL being declared as a passing league Madden 13 went back and made some major tweaks to compensate. This comes in the form of features like Total Control Passing, new animations, receiver awareness, more pump actions, and better audible calls. To enhance the physics, Madden 13 has switched to the Infinity Engine. The new engine helps eliminate ragdoll and now works more with Muscle Tension which also incorporates balance, stumble, mass and speed.

On top of career mode you could also play Ultimate Teams. On the surface it starts as a card game with stats per character and you can buy and sell decks of cards. Once the cards are in place, you can turn it over and play like a career mode. Again you can play Ultimate Teams online or offline and turn the game play into a Fantasy Football mode.

Connected Career is also a new feature to the Madden series. It is being touted as a RPG style online with connectivity up to 32 human players. The options are endless in this area. One person can create a player while another plays as a coach. 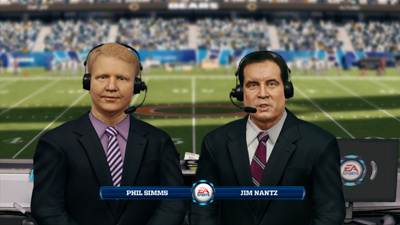 My favorite feature of NCAA, Reaction Time (bullet time), was missing from Madden 13. Although it isn’t necessarily needed to make Madden 13 playable, it just would have been nice to have that added feature since it helps draw in the Max Payne gamer types.

In the end it is too hard to play Madden 13 without comparing it to NCAA Football 13. I found that your level of sports gaming dictates what game you should buy. NCAA caters more to entry level gamers where you have 1 button play modes, and bullet time for the Max Payne lovers. Madden 13 strips those out and stream lines plays to allow gamers to invest more time in focusing on stats and trading, and fantasy football styles. If you’ve invested in Madden before, there are some small benefits that make it worth reinvesting. Added Kinect support and new emphases on passing add to the instant game play. Ultimate Team and Collected Career add to extended play as well as online options.

Not as many entry level options as NCAA. Over simulated game play takes away from actual game time

Final Verdict:
GOOD
While Madden 13 doesn’t deliver a wide variety of content to entice new gamers, it provides quality performance to sports fans.
A copy of this game was provided by Developer/Publisher/Distributor/PR Agency for review purposes. Click here to know more about our Reviews Policy.