Maquette puts a unique puzzler into an engaging exploration of love.

Maquette is the type of game you have to see to understand. It’s another entry into the crowded first-person indie puzzle landscape, this time as the debut from developer Graceful Decay, but it’s also one of the more mechanically unique ones. Set in a recursive, size-bending world, Maquette also paints its gameplay against the backdrop of a full relationship, all of its joys, stresses, and pains. It doesn’t fully realize the potential of its unique gameplay mechanic or its touching love story, nor does it reach above and beyond to transcend its own mechanics, but Maquette finds ways to be joyous, heartbreaking, clever, and frustrating and is certainly a worthy way to satisfy the lovers and the thinkers alike.

It will probably take you a few minutes to get used to Maquette’s recursive worlds before you start to make any progress on its puzzles. In the majority of the game’s six main chapters, you’re dropped into a contained, normally proportioned world, in the center of which is an exact model of that world, and every item and building in the model has the same function as in the larger world and can be upscaled or downscaled based on if it is placed in the model or the real world. Let’s say you have a normal-sized key. If you place that key from the real world into the model, a larger key will appear in the real world whose size is proportional to the original key’s size in the model.

"Maquette is another entry into the crowded first-person indie puzzle landscape, this time as the debut from developer Graceful Decay, but it’s also one of the more mechanically unique ones."

This is the basis for every puzzle in Maquette’s three-to-four-hour runtime. A few other mechanics sneak their way in, especially one chapter that uses special crystals to open particular doorways, but they all invariably revolve around the different-sized versions of the same world. As the game progresses, you have to control the sizes and locations of many more objects, including everything from crystals to stairways, in order to progress the story. You do really need to start to think outside the box, especially as a third, even larger world comes into play and throws a wrench in the entire system.

The puzzles themselves hover over the line between frustrating and clever. In the beginning, the game does a great job at easing you into the different types of solutions you’ll need to understand later in the game, a slow but necessary tactic for the occasionally-mind-bending mechanic. Later on, though, puzzles are more inconsistent. A handful of puzzles had me stumped for longer than I care to admit, but the solutions were often more groan-inducing than revelatory, especially when the puzzles become more meta. The middle chapters contain easily the game’s strongest puzzles, providing the best examples of making you feel clever without being overly frustrating, a mark which the rest of the chapters hit frequently enough but less consistently.

One of the main reasons for Maquette’s successes is its environmental design. Most chapters have more-or-less the same plus-sign-shaped layout, with a center that contains the miniature model and related offshoots on all four sides. What works about it is that each of the offshoots, which usually contains a house or yard, is effectively its own vehicle for puzzles, and each makes mostly unique uses of the size-bending objects. There’s a good sense of progression every time you enter a new yard or pass a new fence because you’re often moving to either a new type of puzzle or will use an entirely new object. The most interesting moments come when the areas interconnect, requiring you to move between houses or yards to solve a single puzzle. 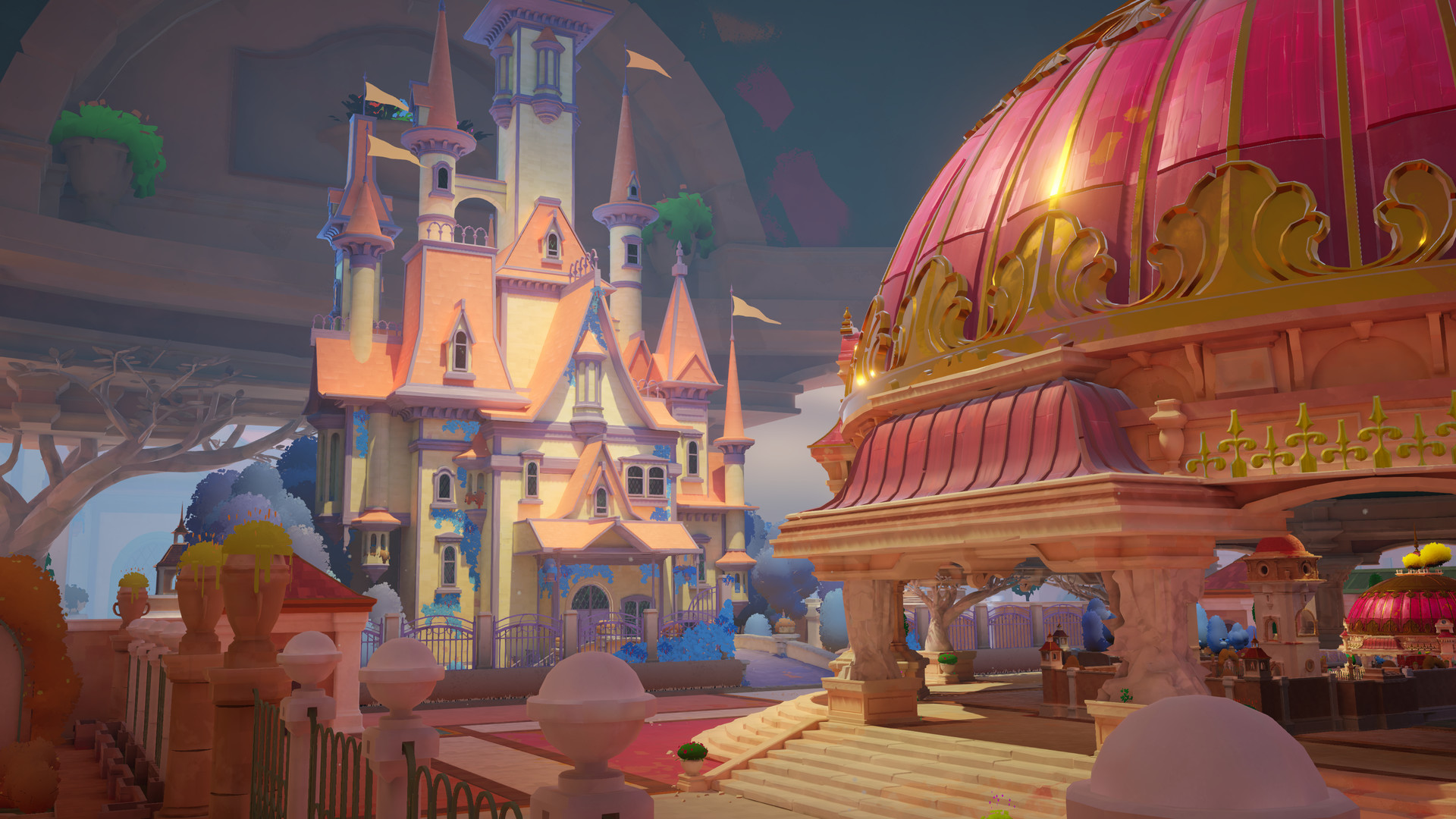 "One of the main reasons for Maquette’s successes is its environmental design."

I would’ve liked to see this more often, though, instead of the common occurrence of putting a forcefield around areas when no longer in use. This is a good way to stop you from going on a fruitless goose chase in a place you’ve already been, but I wanted to use what I’d learned about the past areas in new puzzles. Regardless, the environments are frequently gorgeous, filled with life and a wide color palette to match the story’s tone, as are the songs that often play as you solve puzzles. Even if I was stumped, I always enjoyed seeing where I was going or listening to the music, and the late-game areas are masterfully crafted to evoke certain relevant tones and emotions.

The other side of Maquette’s coin is its contained, yet emotionally wide-ranging love story. It follows the full cycle of a relationship between Kenzie and Michael, voiced beautifully by real-world couple Bryce Dallas Howard and Seth Gabel, structured in the form of a letter written from one to the other to reminisce. As you progress the story, primarily in the form of solving each step of a puzzle, you get another line or sentence of the letter superimposed onto some part of the environment. It’s very well-paced and compartmentalized, as is necessary for its tonal correlation with the environments. The best parts of their relationship correspond to the brightest and most vibrant colors, while the more heartbreaking moments are accompanied by gloomy greys.

The most impressive part of the story is how it conveys everything it needs without character models or traditional cutscenes. Voiceovers happen frequently, but they’re instead combined with colorful animated sketches. While minimalistic, I’d argue that these sketches are in many ways more effective than a true cutscene. This story is familiar, and the writing isn’t always entirely on point, but you have a better ability to place yourself in the story because of how much is left to the imagination. This makes the story all the more powerful and engaging, even if it doesn’t tread any truly new ground. It also allows what ultimately happens in the story to come across naturally, as it’s told less from the point of view of a narrator and more like that of a diary. You’re not here to get to know these characters specifically, but more understand them as stand-ins for anyone in a relationship going through many of the events here, which is why it’s forgivable that there isn’t anything incredibly surprising, as a major twist might have seemed forced. 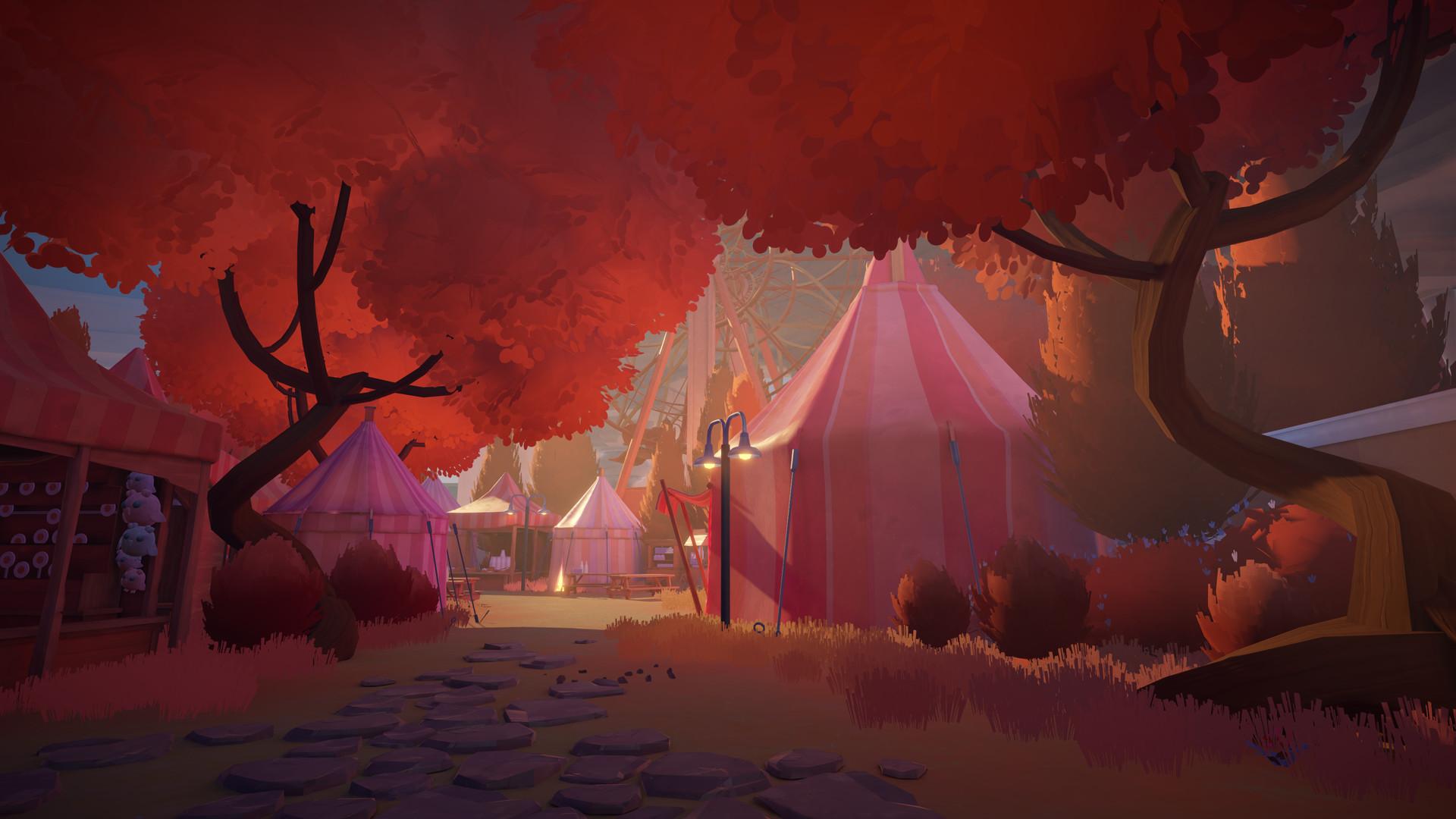 "Maquette’s story is very well-paced and compartmentalized, as is necessary for its tonal correlation with the environments."

Maquette’s most glaring issue comes more as a missed opportunity than a detriment to the experience. While I enjoyed both the story and gameplay as separate experiences, I struggle to see their inherent connection. There are certainly cosmetic overlaps that come in the form of the aforementioned environmental tone, an abundance of symbolism, and some recurring objects and locations in gameplay that are given more context by the story, but this is not a story that inherently needed to be told with this gameplay, or really in a game at all. The story doesn’t gain much from being put next to this unique mechanic, nor does it inform the gameplay altogether. The cosmetic connections that are there make it so that the two don’t feel completely independent, and late-game moments make a few hints at a larger meaning, but I couldn’t shake the idea that I was switching between story and gameplay, rather than using them together to transcend either.

Maquette puts a lot of unique mechanics and interesting characteristics together to create a beautiful, concise puzzler package. The recursive, size-shifting gameplay is some of the more unique gameplay I’ve seen in a puzzle game, and it’s utilized in mostly clever ways to make you really understand the environments and take full advantage of them. The story might not be entirely new, but its minimal visual style and superb cast make a story that you can put yourself into as easily as if it were your own diary. The inherent connection between the story and gameplay is loose, but the environments and visual motifs allow you to connect with the characters much more easily and effectively. Maquette is a short package, but it puts together a lot of successful elements in its highly relatable exploration of love and relationships.

Final Verdict:
GREAT
While it misses the chance to transcend the sum of its parts, Maquette tells a beautifully relatable story with a gorgeous presentation, accompanied by a clever and unique size-bending puzzler.
A copy of this game was provided by Developer/Publisher/Distributor/PR Agency for review purposes. Click here to know more about our Reviews Policy.